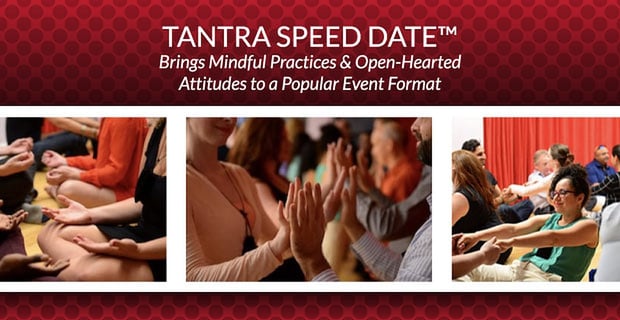 The Short Version:  Tantra Speed Date has been called “yoga for your love life.” Its speed dating events stand out because of the organizers’ focus on education, healing, and mindfulness. Participants leave their preconceived notions at the door and enter an open-minded and open-hearted dating environment. Tantra Speed Date hosts monthly events in 15 cities in the US with plans to expand into five more cities by the end of 2018. This revolutionary form of singles event has connected spiritual people in long-lasting relationships based on shared values and beliefs.

Most parents set aside a specific time in their adolescent child’s life to have The Talk. They sit down and explain the birds and the bees as clearly as they can. It’s sometimes uncomfortable, but it’s incredibly important. This sex talk teaches young people what to expect and how to stay safe when getting intimate with a partner. It ensures they have the skills to maintain healthy sex lives when the time comes.

Responsible parents are expected to talk to their children about how sex works, but, all too often, that formal discussion doesn’t include how relationships work. Too many young people don’t receive clear, step-by-step instructions on how to build relationships, and, as adult singles, they’re expected to just know. However, they often don’t just know.

Some singles need better role models than a do-it-yourself dating site or a hands-off singles event can provide. They need guidance, and that’s what Tantra Speed Date aims to provide.

“Every other dating event I’ve been to stops at the point of just bringing people together, and then it’s a free-for-all as to how to connect,” said Tantra Institute Co-Founder Guy Shahar. “I think this is the only event that provides a foundation as well as a subtle (yet very flexible) structure for relating in a dating context.”

Guy has taught several relationship classes as part of an altruistic effort to get people in a healthy frame of mind. He and his colleague Lauren Harkness share Tantra’s teachings to prepare singles and couples to accept and give love. They have also gone a step further and offered real-world opportunities to mix and mingle at Tantra Speed Date events in New York, Austin, Chicago, Denver, Los Angeles, Phoenix, London, and other big cities.

Tantra Speed Date has established an enthusiastic following in 15 cities around the world, and it is always growing to include people from all walks of life. These events welcome anyone who is open to a mindful way of life. Whether you’re into meditation or yoga, you can sign up for an event to meet people who share similar beliefs and interests.

“Tantra Speed Date is a culmination of not only Tantra, but a lot of things,” Guy said. “It brings the mindful practices we teach to a speed date format. So singles can start off on the right foot.”

Tantra Speed Date prides itself on offering more than just a dating environment — it offers a new perspective on relationship-building and human connections. The event’s staff go the extra mile by giving singles a lesson on chemistry, gender roles, and dating before introducing them.

“We model for the participants how to get into healthy relationship roles before the dating aspect begins, so they are set up for success,” Guy explained.

During coaching sessions, Guy and Lauren outline the differences between masculine and feminine qualities to help daters understand their role in a relationship. These qualities speak to the underlying essence of a person, not just their biological gender, so it’s an important insight to make.

“An overall lack of understanding of these roles is what contributes to so much distance between couples today,” Guy said. “It’s kind of the elephant in the room at any dating event. So once that is addressed, people can relax, and the stage is set for real connections to occur.”

Guy and Lauren draw from years of experience as couples coaches to make sure the Tantra Speed Date events foster promising connections. Their goal is to see participants walk away with many new friends and new love interests.

Tantra Speed Date events attract well-educated and open-minded adults who want to learn more about dating while expanding their social connections. Guy said they’ve seen everyone from curious singles in their 20s to post-divorce singles in their 60s. Some have been in the dating scene for a long while and feel frustrated by its fast pace, while others are just getting back into dating and want a more values-driven approach to meeting new people.

“I came with an open heart and left feeling refreshed and inspired.” —Liz T., a Tantra Speed Date participant

Tantra Speed Date hosts events in 15 cities, and the team plans to add five more cities to the docket before the end of 2018. Tantra Speed Date events typically accommodate 40 singles at a time and last about two hours from start to finish. The speed dating format is unique because it puts single women in the driver’s seat and asks them to choose which dates they want to pursue by placing colored beads in men’s pouches.

“At the end of each exercise, the women choose if they want to connect again with their partner, and that becomes a match,” Guy said. “We like to let the women choose. In reality, though, everyone has a choice. Just being chosen doesn’t mean you have to act on it.”

Not just anyone can run a Tantra Speed Date event. It requires a lot of skill and training to pull it off, and Guy said he takes that training very seriously. “You’re holding space for people to connect with each other in a real way and be vulnerable. You need to make that both a fun and safe space,” he said. “For me the biggest challenge and the biggest pleasure has come from the Facilitator Training Program.”

The Facilitator Training Program empowers individuals to take the Tantra Speed Date model and run with it. Guy and Lauren pass along what they know and what they’ve seen work to help build a network of event organizers grounded in the Tantra philosophy. They are currently accepting applications to join this engaging program.

“The reward is that I get to see what wonderful things all our Facilitators bring to the event,” Guy said. “Each Facilitator’s unique personality brings a different flavor to Tantra Speed Date.”

Tantra Speed Date has 13 Certified Facilitators now, and more people join its ranks all the time. The Facilitators often make the events their own and later share new techniques and processes that they find most useful. This allows the event organizers to continue growing and learning from one another, which has been a wonderful gift to the overall organization.

In the last year, the overall popularity of Tantra Speed Date has allowed the organization to expand to touch many people’s lives.

“It’s been a lot of work to go from one city to 15 in just one year,” Guy said. “It was all quite unexpected. This all started as an experiment, and neither of us anticipated it growing so fast or so big. So, it’s been a huge transition, and I hope to get some sleep in the coming months!”

The Tantra Institute receives testimonials and positive reviews from participants almost every day. Guy told us one couple, Karina and Oren, recently wrote to inform the team that they were getting engaged after meeting at a Tantra Speed Date event.

Karina wrote that she believed the speed dating event helped her get out of her dating routine and make a connection with someone special. “The event itself was so healing on its own,” she said, “and the healing has just continued to unfold as the love between Oren and I grows and matures.”

“People have found the event quite healing — which is a word I’ve never heard associated with a dating event,” Guy said. “It is so rewarding to see that you’re putting something out there that is having such a positive impact, and that people are responding so quickly and so powerfully.”

Guy said that many participants have such a great time that they choose to return again and again. One man even asked if he could buy a season pass to The Tantra Institute’s events. Guy laughed said, “Maybe we’ll do that some day.” For now, though, he’s content watching singles grow as individuals and find lasting connections.

“I decided to participate in Tantra Speed Date out of curiosity and left feeling excited and rejuvenated,” said Justin M., a single man from New York City. “I now feel that I have a much deeper understanding of what it means to be a man in a relationship and how to make dating a beautiful experience.”

“Your event has woken up again a deeper sense of belonging, inner curiosity, and life-affirming openness,” said Christopher D. in a testimonial. “I am grateful that I attended, and for the safe space you created for all of us. A truly special night, possibly the most meaningful I had in months.”

“This event has changed the way I look at relationships. It is healing, deep and an energetic event.” — Novlyn B., a Tantra Speed Date participant

A Denver resident named Catherine B. said she met the love of her life thanks to Tantra Speed Date. Though she’d been hesitant to attend the event, she is now incredibly thankful that she took a chance on love.

Of course, success for the Tantra Speed Date team doesn’t just mean pairing up couples. It can mean pairing up new friends or social connections as well. Some participants go away with a date, while others find a potential friend, landlord, coworker, or wingman/woman.

“Connection seems to happen not just strictly for dating,” Guy said. “I’ve also been surprised to see how people can have many types of different outcomes. It blows my mind the types of connections that have been blossoming. Our intent was for dating, but people seem to find so much more.”

Tantra Speed Date Extends Its Services to More US Cities

Guy told us he firmly believes that relationship skills should be taught in schools and universities. But until that day comes, he will be there to fill in the gaps. He leads instructive coaching sessions at the outset of Tantra Speed Date events to make sure participants have the best shot at finding romance and securing a happy, healthy relationship.

In the next year, Tantra Speed Date will grow its influence by running events in five additional cities and adding new trainees to its Facilitator Training Program. Guy and Lauren plan to continue making the dating scene a better place by organizing mindful and enlightening events for singles across the country.

“Ultimately, we are passionate about helping as many people as possible develop healthy relationship skills, which then lead to healthier and more fun relationships!” Guy said. “And that in turn leads to happier people and a better world for us all to live in. One date at a time. One event at a time. The journey continues!”