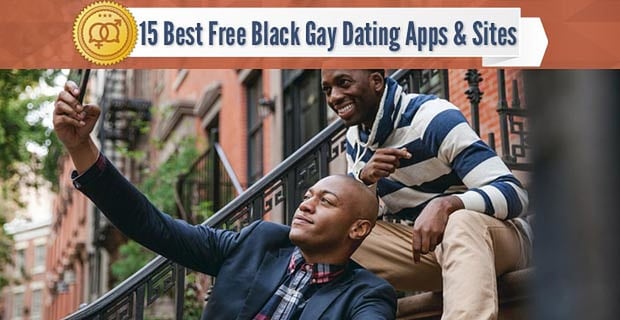 Black dating apps and sites can help gay singles find someone who fits their lifestyle.

Studies show these numbers are growing, but, until we see a dramatic increase, dating for gay black singles is still like looking for a needle in a haystack. To help make that haystack smaller, we wanted to recognize the top 15 gay dating sites and apps. And they’re all free to join, so you really have nothing to lose.

EliteSingles is our top recommendation for black gay singles who value education and are looking for a long-term relationship. Over 80% of the site’s members hold a bachelor’s, master’s, and/or doctorate degree, and practically all of them are commitment-minded. In addition, over 90% of EliteSingles’ members are at least 30 years old. Quality, not quantity, is a major focus on this free site.

Zoosk has been a leader in the dating app space since 2007, and the dating experience it provides has only gotten better year after year. Not only is Zoosk free to download via the Apple and Google Play stores, but it’s also free to view and like profiles and photos, receive matches based on the Behavioral Matchmaking System, and send virtual smiles — just to name a few features.

Meeting people on mainstream dating sites and apps can be difficult for seniors — let alone black gay seniors. The vast majority of online daters are in their 20s, so it takes a little digging to find senior-friendly pockets. That’s where OurTime comes into play. This free site specifically caters to over-50 singles and has easy-to-use tools to help them throughout the process. You also may be interested to hear that OurTime is a sister site of Match, so reputation and trustworthiness are two things you can expect.

Whether you identify as gay, bisexual, queer, or curious, or whether you identify as black or biracial, you’re more than welcome to join BlackPeopleMeet. The site has more than 5.7 million monthly visitors who have similar lifestyles, beliefs, and backgrounds as you, and the site doesn’t charge for registration, browsing, or matching. One of our favorite success stories comes from a user in Mobile, Alabama: “I have met someone who lives in my city, and everything has been going very well. BlackPeopleMeet is a fabulous site. I really enjoy the fact that most of the people I have met are really nice, and they are mature-minded adults.”

MenNation is a gay men-only dating site that’s been around since the 1990s. To get started, you just have to complete a couple of steps: 1) Specify your relationship status (single or couple). 2) Select your birthday, country, and zip code. 3) Provide an email address, screen name, and password. Then everything that comes next is up to you. Bonus: It won’t cost you anything to create a basic account on MenNation.

Another popular hookup site is Adult Friend Finder, which was created in 1996 by Various Inc. Search for free by age, location, gender, and sexual orientation. You can further qualify your search by the type of encounter you’re looking for, including one-night stands, swinging, threesomes, affairs, and fetish play. The communication features allow you to chat in real time, post and/or reply to threads in the forums, and message privately, among others

FriendFinder-X claims it’s one of the largest casual dating sites in the world, but it’s also one of the most affordable. And by affordable, we mean free. Instead of focusing on your wallet, you can focus on finding your ideal sex buddy. It should only take you a minute or two to fill out a profile and upload some photos. You should then start receiving match suggestions.

Grindr, sometimes called “the gay Tinder,” is available in 196 countries and has 27 million users, and counting. It’s also been called the Best Mobile Dating App by numerous media outlets and companies, including the iDate Awards. To match with someone, you both have to swipe right on each other. Then messaging is enabled. If you don’t like the person, swipe left. The Grinder team is also heavily involved in the LGBTQ community, fighting against discrimination with its Grindr for Equality campaigns.

Tinder is one of the most innovative dating apps in the industry because it started the whole swiping phenomenon. Today, Tinder has led to a total of 30 billion matches, and it facilitates 1.6 billion swipes a day and 1 million dates a week. This is what Solomon Jackson had to say about Tinder in his Google Play review: “This truly is a great app for meeting local singles. Haven’t come across any bots or fake profiles, which is extremely nice. Also very user-friendly. All in all, definitely give this app an 11 out of 10!”

Founded in 2004, OkCupid is one of the rare dating sites and apps that’s been totally free since inception, and the team promises to keep it that way as long as the company exists. You can purchase some extra features, like a profile boost, but you don’t need to do that to find and communicate with a match. Another thing that really impresses singles about OkCupid is its gender and sexual orientation options. You don’t just have to stick with gay if you don’t want to. Other options include homoflexible, bisexual, and questioning.

Surge says “the choice is yours,” and the app’s main goal is to not put labels on its 3.5 million users. It doesn’t matter if you’re looking for Mr. Right or Mr. Right Now — Surge can help you. The app’s users are extremely active, sending over 10 million chats a month, and you can set your profile to Private Mode, so only the guys you’ve liked can see you. This will help narrow down your options.

Hornet is “where guys connect.” The gay dating app and social network launched in 2011 and has grown to a user base of 25 million. That’s partly because Hornet uses its own unique matching technology to pair gay singles. Not to mention Hornet has an award-winning blog that covers everything from gay dating and entertainment news to social justice issues.

Whether you’re interested in local or international gay dating, SCRUFF has you covered. The app says all 12 million of its users are real, not bots, and its basic and advanced search filters can lead you to genuine connections. SCRUFF also takes dating to the next level by offering events like parties, festivals, and pride parades. Android and iOS users can download SCRUFF for free via their corresponding app stores.

These Black Gay Dating Sites and Apps Help in the Search

Dating can be hard enough as it is, but when you’re a minority, it can feel like you have way more hurdles to jump over. Online dating is a great solution to that problem, particularly the 15 dating sites we just told you about. That needle in the haystack is out there, and these dating sites are here to help you find that special someone.

With a free dating profile by your side, you can discover romantic possibilities in your neighborhood or abroad. Good luck!