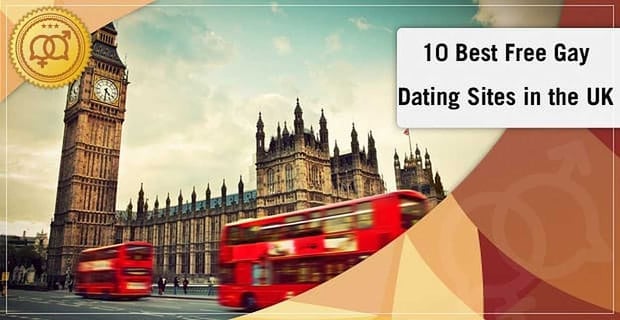 Only about 1.5% of the population in the United Kingdom identifies as gay, lesbian, or bisexual, according to the Office for National Statistics. However, the gay rights nonprofit Stonewall estimates it’s more like 7% when you include closeted folks. Either way, that’s a small dating pool for LGBTQ+ singles, as there are more than 65 million people living in the UK.

To help you fish out the compatible singles, we’ve compiled a list of some of our favorite dating sites for gay singles in the UK, and they won’t cost you a pence to join, browse, and flirt.

Match isn’t a gay-men-only UK dating site, but it’s your best option for many reasons, including it’s among the largest (30 million+ members) and most successful (more dates and relationships than any other dating site). When you sign up, you’re automatically given a free account that allows you to fill out a profile, add numerous photos, search for and receive matches, and communicate in certain ways, including liking profiles.

If you’re interested in finding a serious relationship, Elite Singles is one of your best bets because the site focuses more on quality instead of quantity. Basically 100% of its members are commitment-minded. Plus, more than 80% of members have also earned a university degree. British gay singles in their 30s should do well on Elite Singles because it’s all about connecting selective professionals with high-caliber matches.

On the flip side, we find that Zoosk draws in a lot of younger gay daters. That’s probably because Zoosk is integrated with a few social media sites, like Facebook and Google+, so it’s really easy to put a profile up and start browsing. Zoosk also has a unique matching system that recommends members based on your on-site and on-app behavior, and there’s also the Carousel where you can quickly yea or nay potential dates or partners.

OurTime is a Match sister site, so you can feel confident in the fact that the site can help you meet your dating goals. However, OurTime is just for mature singles (50+). Its registration, matching, and messaging technology is simple but effective, and you won’t have to pay anything to become a part of the ever-growing community. OurTime has millions of members and gets millions of monthly visitors from all over the world.

Gay black and biracial singles have their own dating problems that deserve to be addressed, and that’s what BlackPeopleMeet strives to do. Here, you can feel comfortable being yourself without fear of judgment, and you can rest assured that you’ll connect with people who get you and have similar lifestyles, beliefs, values, backgrounds, and cultures.

As Juliet asked, “What’s in a name?” Well, in terms of BeNaughty, you probably get what this site is about. On BeNaughty, you can find all kinds of people looking to participate in all kinds of casual encounters, including one-night stands, threesomes, affairs, and swinging arrangements. Search filters, including age, gender, sexual orientation, location, and appearance, can help you narrow down your options even more. You don’t really have to think about being scammed on BeNaughty either because the team verifies every member and uses SSL to protect the site and your personal information.

FreeUKDatingSite.com is where gay and straight Brits go for finding serious relationships. All the matching is done free of charge, and you have access to thousands of singles across the United Kingdom and Ireland. The team checks every profile to make sure it’s authentic, and they’re available via phone is you come across any issues. You can take FreeUKDatingSite on the go, too, because it’s mobile-friendly.

We Love Dates is one of the most popular dating sites in the UK, and a significant number of its members are gay, lesbian, or bisexual. You just have to complete four steps to get started: 1) Choose a username. 2) Provide your age. 3) Verify your email. 4) Type in a password. Then you can start meeting and chatting with singles near you. All of this is free to do. We Love Dates also offers gay dating tips on its Gay Dating page, so you can refer to the experts before making a move.

gayParship says “Your match is just one click away,” so what are you waiting for? The site has hundreds of thousands of members, with 23,000 new members joining every week. In addition, gayParship has a 38% success rate for premium members, and 52% of its members are university-educated. The site uses a one-of-a-kind personality test to find you the best matches, and clearly it works. Paul and Greg are one of the many success stories. “gayParship, thank you. You have worked magic in only four dates and in only two weeks of being a member. That is pretty amazing.”

“Have fun meeting new people,” “Find people just like you,” “Dating across the UK,” and “Find people in your area,” are some of the encouraging words that greet new members of GayAndSingle.co.uk. Whether you’re on your smartphone, desktop, or tablet, this UK gay dating site is free and easily accessible. Once you’re done registering, your profile could appear in the Latest Members section of the homepage. If you ever come across any problems, Gay And Single’s customer support team is available 24/7 via online chat.

These Dating Sites for Gay UK Singles Are Bloody Brilliant!

We expect the gay population in the United Kingdom is only going to continue to grow, but until then, these dating sites are awesome resources for those who are single and looking for a solid partnership. It doesn’t matter if you’re British, Scottish, Welsh, or Irish — at least one of these sites is sure to tickle your fancy. We’d recommend trying more than one dating site or app in the search for love because that’ll up the chances of a romantic encounter. Good luck!