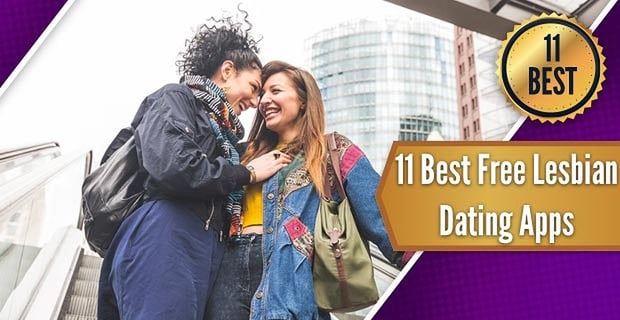 In the last decade, online dating has come a long way in terms of catering to gay and lesbian singles. Sites and apps that used to be straight-only have opened their doors to the LGBTQ+ community.

Yet I continue to hear from many of my lesbian friends (as well as our lesbian readers) that they can’t find a reliable and effective lesbian dating app. Most of the time, they receive matches who are straight and don’t see many authentic lesbian women in their area.

Overall, dating is still a challenge for lesbian, bisexual, and queer women. That’s why we wanted to pay some extra attention to it and select 11 of our favorite lesbian dating apps. Read on to learn more about these popular places to mingle.

Zoosk has a large LGBTQ+ audience and one of the best mobile dating experiences, so it’s an awesome choice if you’re on the go a lot. Zoosk uses its Behavioral Matchmaking System to find compatible dates based on your on-app behavior. For example, if you indicate that you don’t like smoking, Zoosk won’t show you users who smoke. In terms of pricing, Zoosk does offer premium memberships, but the basic membership gives you access to everything you need.

With more than 42 million signups since its inception and more than 39 million visitors a month, Match has the numbers on its side. These singles are from all over the world, have various interests and personalities, and range in age, sexual orientation, gender, religion, ethnicity, and background. Another important number Match has under its belt is that it’s responsible for the most romantic connections of any dating app.

Quality is better than quantity — at least that’s what the folks at EliteSingles believe. If you agree, you should give the app a try. EliteSingles doesn’t send you a crazy number of matches every day, but the handful of matches you do receive are matches you’re very likely to swipe right on. This is because EliteSingles uses an in-depth personality assessment to get to know all of its members and create the most compatible pairings.

In addition to sexual orientation being a top dating priority, age is up there, too. For mature single lesbians, we recommend OurTime, and we recommend it for many reasons. One, OurTime is a sister app of Match, so you know it’s trustworthy. Two, it only caters to singles who are 50+, and a significant number are homosexual. Three, it’s free to join, browse, and flirt. Four, it has dozens and dozens of success stories that prove it works.

While the population of black and biracial men and women is growing, it can still be hard for singles to find like-minded people and figure out who’s also available. That’s where BlackPeopleMeet comes in. The app has a large, targeted, and active user base — not to mention signing up automatically gives you a free account. So you can take a look around, try out the features, and chat with people without making a full commitment if you don’t want.

We all know that not every gay girl is looking for a relationship or even a date — some are just looking for a one-night stand or FWB situation. If that sounds like you, Adult Friend Finder has got your back. Here, you won’t have to put on any facades or worry about people judging you. Everyone’s on the same page. Registering only takes a minute or two, and then you can flirt via videos, forums, instant messaging, and private emails, among other ways.

LesbianPersonals is another hookup app, and it’s specifically for lesbian women. LesbianPersonals claims that it’s the world’s largest lesbian dating platform, and you won’t just find sex buddies on here. You’ll also find users asking questions and offering advice to one another — it’s a real community. No need to reach for that credit card either because LesbianPersonals is 100% free to try.

HER, formerly known as Daatch, strives to help you “find your person,” whether that’s “a travel buddy, a friend in a new city, your ride or die, or love for life.” More than 4 million women from across the globe have downloaded this lesbian app, and you can, too, via the App Store or Google Play Store. HER also hosts events for lesbian, bisexual, queer, and curious women to meet in person, including seasonal parties, festivals, and speed dating.

OkCupid has been offering lesbian singles a welcoming and productive dating platform way before many others in the industry. In 2014, the app even added 13 orientation options and 22 gender options to its profiles. Now, instead of only having options like straight man, straight woman, gay man, and lesbian woman, OkCupid has options like genderqueer, intersex, sapiosexual, and questioning. Plus, you can identify yourself as looking for friendships, hookups, short-term dating, long-term dating, or all of the above.

Bumble made waves when it hit the scene in 2014 because it was created by women for women, and only women are allowed to send the first message in straight matches. If you’re gay or lesbian, either person can send the first message after they match. Bumble wanted to cut down on the number of inappropriate messages (not to mention dick pics) women were receiving, and it has effectively civilized the online dating space with this feminist policy. Today, Bumble is one of the most popular dating apps ever, especially for lesbians.

Pink Sofa says it’s for lesbian singles, as well as their friends, who are 30 years old or older, and it says it’s not like some of the “soulless” dating apps you may come across. Pink Sofa is for making a genuine connection. You don’t have to subscribe to see people’s profiles and photos, and the app’s chitchat feature and forums are fun, easy to use, and very active.

When You Think of Lesbian Dating Apps, Think of This List

While dating apps still have some work to do to make the experience just as enjoyable and successful for gay and lesbian singles as it is for straight singles — they’re making strides every day. That’s especially true for the lesbian-friendly dating apps above. The last part of the test, though, is to sign up for an app (or two or three) yourself and come to your own conclusions. We think you’ll be happy, though!