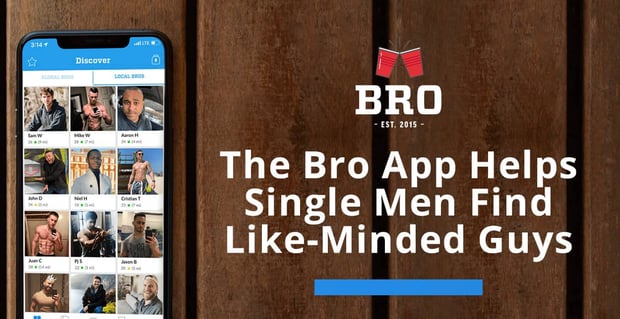 The Short Version: Single guys who are just starting to explore their sexuality may not be ready to download a fast-paced and swipe-happy hookup app. They may not be ready to pursue gay sex — maybe they’d rather start as friends first. That’s where The Bro App can come in handy. This gay-friendly app gives men the freedom to define relationships however they please. The Bro App is out to prove that online dating doesn’t have to be all about sex — the all-male network leaves the door open to platonic friendships, serious relationships, and other meaningful connections between single bros.

Urban Dictionary defines a bromance as a close relationship between men that’s non-sexual. The term cleverly pairs the words bro and romance to refer to two dudes who have nothing but love for each other. Their bond is typically platonic and pure, but that doesn’t mean it needs to stay that way.

The Bro App has put the romance back in bromance by encouraging like-minded guys to explore their feelings and sexuality. The social discovery app offers a safe and comfortable environment where men can be themselves and find local dates or new friends.

The Bro App sparks matches between guys who have common interests and shared goals.

When it launched in 2015, The Bro App spoke to single men who either don’t necessarily identify as LGBTQ+ or are in the closet. But its appeal has proven to be much deeper than that.

Gay, bisexual, and queer men can easily get burnt out by the hypersexualized vibes on mainstream gay dating apps. Lots of guys have found relief on The Bro App because the app isn’t overtly sexual and values friendship over physical attraction.

“We got popular fast,” said The Bro App Founder and CEO Scott Kutler. “We’ve gotten to the point where it’s a good space for people looking for connections — be it sexual or not.”

The Bro App encourages cis men and transgender men to start out as friends (or bros) and see what develops. Members can state what they’re looking for (friends, date, FWB) in the dating profile, so there aren’t any mixed messages along the way.

Over the last few years, The Bro App has made a name for itself as an alternative to gay hookup apps. It provides a safe space for a single guy who is looking to explore his sexuality without pressure or judgment. Guys can join The Bro App to find a new relationship, have silly or flirty conversations, and many even spark a bromance that can last a lifetime.

Developed Out of a Frustration With Other Options

The genesis The Bro App begins with its Founder and his own online dating journey.

In 2014, Scott had just started to identify as a bisexual man. He was single and interested in meeting other guys like him. But that didn’t mean he wanted to jump into bed right away. The highly sexualized world of gay apps and swiping apps weren’t quite his speed, but he couldn’t find a decent alternative for LGBTQ+ dating.

Scott decided to create The Bro App to help guys who were in a similar headspace as he was and wanted to just chill with guys online.

“As someone who was looking for friends, FWB, and relationships, you don’t go on an app called Hanky or Hole to look for those things,” he said. “I wanted to make a safe space both for people who were recently out or not sure of their sexuality. Just men looking for other guys.”

Any guy who enjoys brodowns and bromances can join The Bro App.

Scott named his venture The Bro App to reflect its friendly intentions. It’s not explicitly for sex. It’s for bro-ing down and making friends. The user base is comprised of cisgender men and transmasculine folks who are over hookup culture and hoping for a more casual and soulful way to meet local guys.

“We’re going to be more popular in major metro areas. A gay app won’t be as accepted in a place that’s not as urban,” Scott said. “However, we are also popular in Australia and South Africa, which are both places where there is still a stigma about being gay. People use it to ease themselves into it.”

“The Bro App (BRO) is amazing. So much better to make friends on and better than those lame hook-up apps,” said Dylan T. in a five-star review. “The app is clean, organized, and has great features.”

Search for Guys Locally and Globally

The Bro App has users from all over the globe, but the bulk of its members come from the United States. These guys don’t have to stay in the U.S. when exploring the digital dating scene. The app has local and global matchmaking tools to accommodate guys no matter where they go.

Single guys can create an account using their Apple ID, Facebook account, or phone number — all of which remain private. The Bro App only collects this information to verify identities and cut down on fake profiles.

Bros of all types can vibe together on this low-key dating app.

The next step involves identifying what type of bro you are. A jock bro? A bro-grammer? A casual bro? These tribes help users find like-minded people for friendships and relationships. The user will also have to disclose what type of connections they are looking for — long-term relationships, friends with benefits, just friends, etc. — and this information will appear prominently on the user’s profile.

Not sure what you want? No worries! You can choose the “whatever” option in this category and let guys know you’re not here for anything specific. You’re just here.

Once the profile is complete, users can see the profiles of men who are online (no matter where they are in the world) and a rundown of users who are less than 200 miles away. Users can express interest by giving a virtual Fistbump. That’s similar to a poke or a like, but with more of a bromance flair.

Users can view up to 20 Daily Bros every day and send Fistbumps to show they’re interested in pursuing a conversation. A single guy can switch to Travel Mode if he’s on the move and wants to see more profiles outside his city, state, or country.

The Bro App has sponsored a popular Facebook group called Bros and Stuff that lets users connect and chat with each other through social media. Guys trade jokes and memes in the group and create a community that’s about much more than their gender identity or sexual preference.

“We try to be all-inclusive with guys who are exploring their sexuality or just looking for friends with benefits,” Scott said.

A bromance can mean something different to everyone. But, at its core, it’s about a man connecting with another man on a deep level and not hiding his love for that special guy. This message resonates for certain men in the gay dating world because not everyone is comfortable moving fast and rushing into sex.

Scott has seen firsthand the difficulties of dating when someone is recently out or still in the closet. He created The Bro App to ensure men can go at their own pace when questioning their sexuality and meeting new people, despite the challenges of the day.

“It can be very helpful to find people who have a similar state of mind in terms of coming out,” Scott said. “It helps them ease into the community. A lot of people feel that’s difficult. We can’t go to gay bars or play gay sports, so a safe space where people can figure things out is really nice.”

In the coming year, Scott said he’s launching a marketing campaign to increase signups and considering adding video chat options to The Bro App. Basically, the goal is to improve the app’s functionality and grow its membership base, so bros never have to be alone.

“It means a lot to me. I am more open now with my sexuality, but this is for someone who needs that help and is questioning themselves or who is looking for more than a one-night stand,” he said. “We’re too new for people to have gotten married, but there are people who have been engaged and say they’ve found their soulmate.”