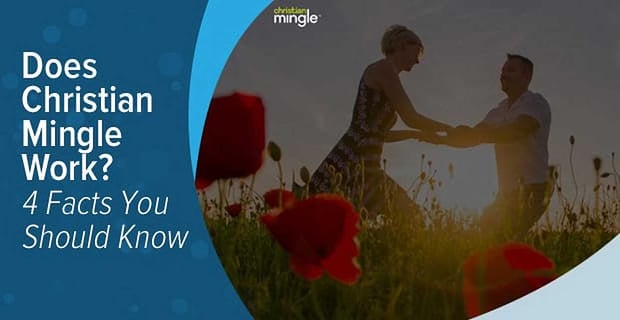 “Does Christian Mingle Work?” — (4 Facts You Should Know)

Does Christian Mingle really work? Maybe you should ask Celeste and her hubby Brian. They met on this faith-centric dating site and are now happily married.

After a few months of messages and meetups that didn’t lead to anything, Celeste was ready to give up on online dating. She’d joined Christian Mingle because she wanted to find someone who was marriage-minded and shared her passion for religion, but she was starting to think the site wouldn’t work for her. Then everything changed for her.

Celeste and Brian met on Christian Mingle and were happily married within six months.

Brian’s photo caught Celeste’s eye, and she decided to check him out before calling it quits. She read his profile from start to finish and realized he was everything she wanted and needed.

Little did she know, Brian had been looking at her profile for over a week but had never reached out because he thought she was out of his league. Celeste made the move and sent Brian the first message. Six months later, they were married.

This is just one of the thousands of success stories from Christian Mingle, and below are four facts that go into more detail about how anyone can find love on the site — just like Celeste and Brian did. You’ll also find information about how Christian Mingle actually works in terms of signing up for a membership, making a profile, and searching for matches.

Christian Mingle is consistently ranked among the top Christian dating sites on the web — both by consumers and businesses.

We also have a lot of wonderful things to say about Christian Mingle, which you can see below:

Our Experts Say: “ChristianMingle is strictly for Christian singles, and it has a large user base that you can browse through by your individual preferences...” Full Review »

According to a survey conducted by Survata, an independent research company, 84% of Christian Mingle members recommend the dating site over any other.

The app also has numerous five-star ratings on Google Play, including one from Sean Hackney who said, “Between school, the Marine Corps, and my son… I didn’t know how I would ever meet a good woman. Christian Mingle is amazing, and I’m really happy with the app and website.”

2. Over 2.4 Million Christian Singles Visit the Site Every Month

If it’s numbers you’re looking for, Christian Mingle has them. Not only do more than 2.4 million people visit the site every month, but the latest stats show they’ve grown to over 10 million members since they launched in 2001. Something you should also know about Christian Mingle is they cater to LGBTQ+ singles as well as straight singles and are constantly working on improvements to better serve as many communities as possible.

3. They’re Responsible for Thousands of Marriages

Celeste and Brian aren’t the only ones who have been blessed with love and happiness because of Christian Mingle. That same Survata report also has a lot of other interesting facts, such as:

These are encouraging signs for anyone serious about building a God-centered relationship online. There’s no question that Christian Mingle is a good dating site that has the right values and the right tools to work wonders.

4. There’s Even a Movie About Christian Mingle

Christian Mingle is so popular that a movie was made about it.

Not many dating sites can say that they’ve had a movie named after them — especially one that stars the charming Lacey Chabert (for all you “Mean Girls” fans out there) — but Christian Mingle can.

“Christian Mingle” the movie tells the story of Gwyneth Hayden, the last single girl among her friends, who joins the website in the hopes of meeting her future husband.

Take it from IMDb user markcurrier2002: “I liked this movie. In a day of CGI action movies on steroids, this one is a throwback to a simpler time of ‘lonely girl desperately seeking love.’ The difference here is that this movie is clean, no hookups, no drugs, no murders.”

How Does Christian Mingle Work, Anyway?

Besides being extremely popular and having a high success rate,  Christian Mingle’s actual online dating process — from start to finish — is both simple and fun.

Christian Mingle offers a free membership that never expires and that anyone can sign up for, so you’ll know what you’re getting into before fully committing to the site.

With this membership, you’ll be able to register, make a profile, upload photos, view millions of members, search for and receive matches, and “Like,” “Favorite,” and see what you have in common with those who catch your eye.

Take a Few Minutes to Fill Out a Profile

When creating your profile, Christian Mingle will ask you to fill out information like your gender, age, location, height, education, lifestyle habits, if you have and/or want kids, and which branch of Christianity you practice. This just takes five minutes or so, and then you’re on your way to finding matches.

You can come back to your profile at any time and add more details to sections like “To me, being a Christian means.” and “My favorite Bible passage and why.”

Receive Matches & Browse for Them Yourself

Christian Mingle will send you daily matches in your inbox and via the “Your Matches” tab, where you can see compatibility percentages, pictures, and brief bios. You can also see who’s interested by going to “Who’s Viewed You” under the “Activity” section.

In addition to the site’s suggestions, you can check out profiles on your own by hovering over “Browse” and clicking on “Search.” This is where you can change your match preferences if you want to expand the age range and location. There’s also an option to filter search results by people who are online now, who’ve logged in recently, and whose profiles definitely have photos.

“How does Christian Mingle Secret Admirer work?” is something a lot of users want to know, and it’s actually really easy to get the hang of. Secret Admirer is like a carousel of singles, and you can find this feature under the “Browse” section.

If you like the person Christian Mingle shows you and want to learn more, you’ll click on the heart icon. Christian Mingle will then secretly find out if they’ like you, too. If they do, it’s a match!

If you aren’t interested in the person or want to decide later, you’ll click the X icon or the swirl icon, respectively. Note: No one will ever know if you said no to them, and you won’t know who said no to you.

To access all of Christian Mingle’s features, such as unlimited communication and seeing who’s liked you, you’ll want to upgrade to a premium subscription. The good news is the site has several affordable options:

You’ll notice that the six-month membership will give you the best bang for your buck, so that’s the route we’d suggest you take. It’s a good middle ground, and it gives you enough time to get your footing in the online dating scene. Either way, we know you’ll be happy with your choice.

Join Christian Mingle & See for Yourself if it Works!

Celeste and Brian’s touching love story is not an anomaly on Christian Mingle — the site has a long legacy of success in the online dating scene, particularly when it comes to the Christian community.

Yes, Christian Mingle has worked for many faith-driven singles, and it could work for you, too.

When all is said and done, Christian Mingle is one of our favorite Christian dating sites, but, ultimately, only you can decide if you think it is worth the effort and the subscription fee. We’ve equipped you with the information you need to know, and now the power is in your hands!

How Does Match Work? (5 Steps to Online Dating Success)

Are Dating Apps Worth It? Five Reasons to Give It a Try!