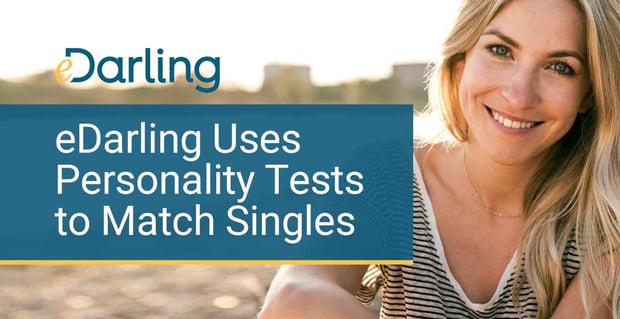 The Short Version: Some singles turn to dating sites and apps looking for a casual fling. Those who are ready for something more meaningful often sign up for eDarling, a leading European dating site, to find long-term relationships. eDarling, owned by the same company that powers EliteSingles, Zoosk, and other successful dating sites, uses a personality test to offer members compatible matches. Instead of going out on a series of hit-or-miss dates, most eDarling users want to connect with the love of their life.

The 2018 General Social Survey found that more than half (51%) of American respondents ages 18 to 34 identified as single. That’s a significant jump from 2008, when 33% of the survey’s respondents said they were single.

Single status is also on the rise in Europe. In Sweden, for example, single-person households make up 51% of all households, according to Eurostat.

Despite the relative abundance of singles, many people searching for a romantic partner find it difficult to connect with someone who’s serious about finding a relationship. They may swipe on apps, sign up for classes, and visit hotspots all over town without meeting someone interested in a long-term partner.

“Singles should join eDarling if they’re looking for love, connection, and quality without compromise,” said an eDarling spokesperson. “If they’re at a stage of their lives where they are ready to find a meaningful, lasting relationship, and they want to join a community of like-minded singles, then eDarling is the place for them.”

Many singles may be unavailable because statistics only tell part of the story. Some are fresh off a breakup and aren’t emotionally ready to date seriously. Others may be too busy with work and don’t want to prioritize romance. And many online daters are just looking for a good time.

eDarling users can find compatible partners who are ready to find high-quality partnerships.

Part of a Global Family of High-Quality Dating Platforms

eDarling is considered the big brother of some of the world’s most popular dating sites, all owned by the publicly traded Spark Networks SE. It launched in Berlin, Germany, in 2008 and was initially called Affinitas GmbH. The company is considered one of the originators of online dating, and eDarling was one of the first dating sites it developed. It has continued to grow in popularity all over Europe.

“Today, Spark Networks SE operates in more than 80 countries, with a widening portfolio of well-known dating sites that include eDarling, Zoosk, EliteSingles, SilverSingles, Christian Mingle, Jdate, and JSwipe,” the eDarling spokesperson said. “There is a lot of diversity in the Spark team. We’re a group with many different cultures, personalities, skills, and experiences, united by a shared passion for bringing people together.”

The eDarling app allows singles to find love from a mobile device.

Behind the scenes, team members hail from more than 40 countries. The company’s headquarters remain in Berlin, although it also has offices in Utah and New York City.

“eDarling is one of the leading European dating sites and is designed for all singles who are seeking to match with someone on a meaningful level,” said the company’s spokesperson.

While its membership is diverse, the fact that its users aren’t looking for casual flings means that many singles on eDarling have had experiences that make them ready to find romance.

Members Take a Personality Test to Match on a Deeper Level

Many modern dating sites use swipe-style technology to present users with seemingly endless options. Singles may spend more time than they expect with their faces buried in a mobile device screen searching for compatible partners. That can make it easy to miss someone authentic in favor of someone who is attractive.

The eDarling app — available on iOS and Android — works differently. Once users register and create a profile, they take an in-depth personality test that works on the Five-Factor Model.

“The test measures personality aspects, including openness, extraversion, and agreeableness, and gathers insight on big-picture compatibility factors like whether or not someone wants children,” the eDarling spokesperson said.

Compatibility is the most significant factor in finding successful, long-term romantic partnerships. Singles often need to share similar value systems, life goals, and views on important issues, including sexuality and emotional balance, if a relationship is going to work.

Once the eDarling algorithm has a strong idea of who users are and what they’re looking for, the fun begins. Singles receive matches based on compatibility, and they all have meaningful potential, so it’s not just a numbers game.

And it only takes one match to spark a romance.

“One thing we are proud of is that on eDarling we bring these meaningful matches to our members, sending them a limited number to explore each day,” the spokesperson said. “This means that our members spend less of their precious time sorting endlessly through profile after profile, leaving them free to work on what counts: sending messages and making true connections.”

eDarling: Seeing the Value of Human Connection in 2020

The team behind eDarling loves helping their members find authentic, meaningful connections. That is especially true in 2020, when stay-at-home orders due to the COVID-19 pandemic were especially hard on singles psychologically.

“2020 has been such a difficult year, but among all the hardships have been some timely reminders about the importance of human connection,” the spokesperson said. “eDarling is a platform that singles can use to meet new people — and even find love — while staying safe at home, and being part of that story is incredibly rewarding.”

Of course, online dating is evolving as health precautions have stopped people from meeting up for coffee or cocktails on a first date. Now, singles spend more time chatting and getting to know one another through video calls before meeting for a socially distanced walk in the park.

That makes eDarling’s platform, based on personalities and compatibility, even more effective in authentically connecting singles. In 2021, eDarling plans to hold steady as one of the leading European dating sites and attract even more members who are ready for a serious commitment.

Many singles have been frustrated in the past with dating sites that encourage ghosting and other behaviors by the gamification of their search interfaces. eDarling is a refreshing alternative for mature singles who are ready for real relationships that will bring joy, romance, and fulfillment to their lives.

“We want to deliver quality without compromise and see eDarling continuing to thrive,” the spokesperson said. “Most of all, we want to keep bringing singles together.”