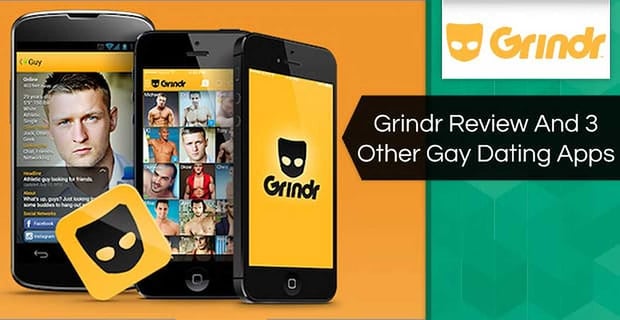 Dating apps have a lot to offer the LGBTQ+ population, and Grindr is one of the best out there — here’s our Grindr review with more juicy information.

If you’re looking for a hot local date, Grindr has your back. In 2009, this gay dating app became one of the first to use a smartphone’s GPS data to prioritize potential matches that were right around the corner from each other. It’s no wonder Grindr became so popular as an instant hookup app for men.

Grindr has been a big name in the online dating industry for years, and below are our thoughts on the app as well as some other gay-friendly dating apps for you to consider — because you can never have too many options when it comes to finding that perfect match!

Joel Simkhai founded Grindr in 2009, and he served as CEO until January 2018 when he sold the company. Grindr is most commonly known as a casual chat or hookup app, but the official mission isn’t so raunchy. Here it is straight from the team: “Grindr connects gay men to the world around them, and represents a modern gay lifestyle that brings men together with people, places, and things they care about most.”

Available for iOS and Android devices, Grindr has one of the most engaged user bases we’ve ever seen — every day, the app has more than 3 million active users, more than 228 million messages and 20 million photos are sent, and the average member is logged in for 54 minutes.

As with a lot of dating apps, getting started on Grindr is really easy and quick. Provide some info, including your email, username, password, age, and sexual interests. The app also allows tribes like Jock, Otter, Twink, or Bear.

The most popular aspect of Grindr is its location-based matching — it was among the first dating apps to offer this. You’ll be presented with up to 100 men a day who are in your area, and you can swipe right if you like them or swipe left if you don’t. If you want to see different match results, adjust your search filters. Grindr also allows you to chat, share photos, favorite compatible members, and block suspicious members.

All of these features are 100% free, but you have the option to upgrade your basic account to a GrindrX account. It costs $5 a month and allows you to do more things like see more profiles a day, send multiple photos at once, and block as many members as you want.

Grindr isn’t just about dating either — the team behind the app cares deeply about improving the LGBTQ+ community. Grindr for Equality is a branch of the app that promotes justice for LGBTQ individuals — as well as informs people around the world about issues they face. Some of Grindr for Equality’s initiatives include Get the Gay Vote Out and PrEP Education. Grindr makes a difference through its blog, Into, as well, which covers topics like culture, travel, news, entertainment, politics, and personal stories.

In 2020, in support of the Black Lives Matter movement, Grindr announced that it would remove race and ethnicity as a search filter option in the gay dating app. Men can no longer racially profile their dates on Grindr, but they can still search by age, height, weight, looking for, photos only, and online now.

We’ve read countless user reviews about Grindr, and we found the majority to be positive. David McMurtry and Aaron Ovedur are just a few of them, respectively writing on Google Play: “ONE word AWESOME” and “The app works great. Easy way to connect with other gays. Nice work!”

However, we also saw a good number of negative reviews, and, boy, are they doozies. The biggest problems seem to be profiles that appear to be fake and a ton of obnoxious and loud ads popping up — whether you’re trying to browse, edit your profile, send photos, or chat.

Grindr is definitely worth checking out, but, if you were at a buffet, you wouldn’t limit yourself to one item, right? So why would you do the same in terms of dating apps? We have three alternative gay dating apps that can satisfy your cravings just as much, if not more, than Grindr. Zoosk kicks off our list:

Launched in 2007, Zoosk has history and impressive numbers behind it — with more than 40 million users, 30 million downloads on iTunes and Google Play, and 3 million messages sent a day. The price tag isn’t too shabby either. It won’t cost you anything to register, upload your information and photos, view profiles, receive match recommendations, and flirt and communicate in a variety of ways.

From the users’ perspective, Zoosk is as just as much of a favorite. Ryan Parkin gave it five stars on TrustPilot.com, saying, “Found my someone within days — excellent.”

Next up is Match, which really needs no introduction, but we’re going to do it anyway. With over 22 years under its belt, and counting, Match is the most established name in the dating industry. Not to mention it has a huge gay audience and is responsible for more romantic connections than any other dating app out there.

You can get all the necessary features for free on Match. But, if you upgrade, you’ll get unlimited communication and email read notifications, and it’ll only cost you about $5.46 a month using this discount.

Sexual orientation is, of course, important to you, but if intelligence is high on the list as well, Elite Singles is probably the app for you. Approximately, 82% of its members hold a bachelor’s, master’s, and/or doctorate degree.

Elite Singles is also a great choice for those who want a serious relationship instead of a hookup, which is mostly what you’ll find on Grindr. The dating app claims that the vast majority of its members are looking for a lifelong partner, and 2,500 of them find it every month.

Grindr Is A Go-To, But It’s Not Alone!

Narrowing down who’s gay and who’s single on your own can be a daunting task, and Grindr has most certainly taken that burden off your shoulders by doing most of the work for you. There are a lot of gay dating apps out there, not just Grindr, so you can always find an alternative. Since you’re not spending any money, it’s worth testing a lot of different apps out on your own to see which one is the right fit for your needs and lifestyle. We’re confident that the alternatives we’ve listed above will make the cut!

Tinder Plus: Is It Worth Paying For a Premium Dating App?