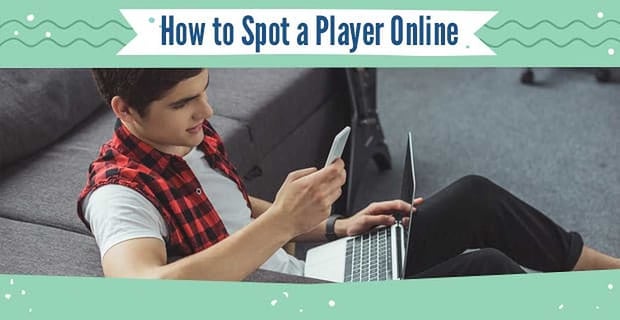 How to Spot a Player When Online Dating

In the song “Too Little, Too Late” by the 2000s princess JoJo, she sings: “I can love with all of my heart, baby. I know I have so much to give. With a player like you, I don’t have a prayer. That’s no way to live. It’s just too little, too late.”

I think it’s safe to say most of us have been blinded by someone who said and did all the right things — but he or she was saying them to and doing them with other people as well. However, there are ways to stop the heartbreak before it can happen. Below are five ways to spot a player, particularly on a dating site or app.

1. They’ll View Your Profile, Like Your Photos, and Send Winks A Lot, But They’ll Rarely Message You

Whether they notice it or not, a player will usually check out your dating and social profiles, like your photos, send virtual winks, and things like that, but they’ll rarely message, text, or call you. This kind of behavior is often known as orbiting, and it makes it hard for you to forget them or not think about them. They like to keep you close enough that you’re an option but far enough away that they don’t have to invest too much effort if they don’t want to. Everything is on their terms.

2. If They Do Message You, It Seems Copied and Pasted

When a player finally does send you messages or texts or calls you, everything they type and say is generic and short. None of the details are specific to your personality or your likes and dislikes. If your name were taken out of the conversation, he could be talking about anyone.

A study by Zoosk shows that, on average, some men will send the same message to 15 different women. The good news is 87% of those men weren’t getting replies to those messages because they were so generic.

Players will try to appeal to your emotions to get you to do what they want. They may say things like they’ve never felt this way before or you’re not like other women or men. They’re trying to pull you in, but there’s no promise that they’ll actually follow through on anything they say. If you’re gut is telling you that something is off, you should probably listen to it.

4. They Put Off Meeting in Person

Most of the time, someone who’s flirting with you as well as with other people on a dating site will always have a reason why they can’t meet in real life. Maybe they will say they got sick or their car broke down. Maybe they’ll tell you a friend or family member needed their help or that they got stuck at work. These could be legit reasons, but if it happens all the time, it’s more likely that these are excuses.

If a player doesn’t want to meet you, he or she will come up with all kinds of excuses.

If they do meet up with you in person, the dates are usually few and far between. After all, they have other people they have to go on dates with, too. If someone isn’t giving you the time you want and need, you may want to think about cutting them loose.

Aziz Ansari told a joke during his stand-up show at at Madison Square Garden once that was about getting into a texting situation where you both go back and forth for hours, and then all of a sudden the person disappears, even though you know they saw your text. Did they just drop off the face of the Earth? Did their phone mysteriously disappear from their hand? Probably not. They probably just wanted to stop responding to you.

A player will act like this. You’ll be having a great conversation and lots of witty banter, and then out of nowhere they’re gone. Instead of responding to you immediately like they used to, they’re hard to get a hold of, even though we know we all have our phones by our sides pretty much 24/7. Players can be hot and cold.

Players are Gonna Play, But You Don’t Have to Fall for It!

JoJo was a pop genius, and she sung about situations that a lot of people go through, including getting played by someone you like. We’re here to help you prevent that from happening. Players come in all shapes and sizes, but they have a few characteristics and behaviors in common. To protect your heart, keep an eye out for the red flags above.