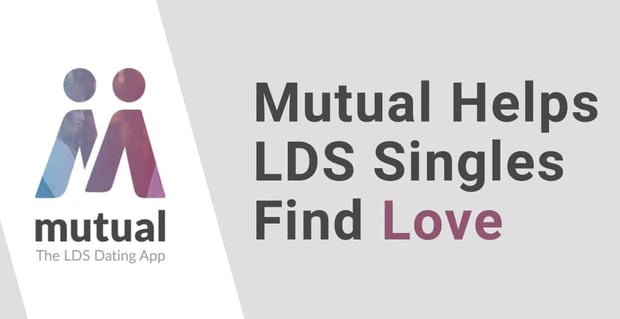 The Short Version: It’s important to find a partner that is equally yoked as you. Life is full of ups and downs, and it’s helpful to have someone in your corner that is as solid in the same faith. Religion is an important factor in dating, and religion-based apps come in handy for many singles. The dating app Mutual is on a mission to help LDS singles find love and genuine connections by offering a safe and fun space for them to mingle outside of the church. Mutual is a faith-driven app whose members are LDS singles from all over the world who share the same beliefs and standards.

In today’s society, we have seen an increase in the number of dating apps available for singles. This is awesome considering that online dating is high in demand Singles turn to online dating as opposed to traditional dating because of its convenience. Instead of having to go to a church event to scout out the next eligible bachelor or bachelorette, Latter-Day Saints (LDS) singles can now do it from the comfort of their homes.

Mutual is the number one app designed for members of the Church of Jesus Christ to come together to meet, date, and potentially fall in love. LDS singles who are ready to jump into a long-lasting relationship — or just want to have a friend to talk to — have the opportunity to do so on the Mutual app.

Mutual was launched in 2016 and has proudly gained over 1 million user downloads thus far. Cooper Boice, a founder of Mutual, had his fair share of bumps in the road when it came to dating. Cooper spent most of his dating life looking for a partner who shared his standards and faith. Cooper said that this journey was unfortunately frustrating and difficult.

Through his personal experience, he realized the urgent need for a quality dating site for LDS church members. Cooper sought advice from trusted friends and ended up being referred to tech guru Bob Carroll. Together they were able to combine their expertise and build Mutual from the ground up.

“It was all done out of passion and the need to find a solution,” said Mutual’s Director of Marketing, Tiah Westover. “The first match was the match of the cofounders, and it’s grown exponentially ever since. It has over one million accounts and is the number one dating app for LDS singles.”

Leading Singles to a Temple Marriage

People tend to use dating apps for a mix of romance, socializing, and entertainment. Some people use an app to mingle and help them stay socially connected while others may be looking for a long-term relationship that leads to “I dos” and a new family. As a dating app for LDS love, the Mutual team is continuously thinking of new ways to expand the company’s offerings.

Seeing people’s lives transforming and relationships manifesting is what keeps the Mutual team going. Cooper shared that the team takes pride in knowing that a lot of singles choose to use the app for dating purposes. But he claims that marriage is the ultimate success. There are more than 100,000 Mormons from more than 100 countries around the world on the site — leaving room for people to explore and have many options.

“I love everything about it! The people on here almost seem too good to be true! I love that you have to hook up your Facebook account so you know people on here are who they say they are,” said an anonymous Mutual user in a testimonial.

Luckily, Mutual members don’t have to worry about distance being an obstacle. Singles can step out of their comfort zones and meet new people from around the world. Members can swipe through different profiles with detailed bios and high-resolution photos. To help members get to know each other beyond their profiles, Mutual also offers cool features that allow users to interact with one another by sending comments rather than messages.

For the safety of members, Mutual shares strict community standards and guidelines that members must follow on and off the app. All profiles are reviewed before being accepted into the Mutual community. Members who feel they have encountered untrustworthy profiles or inappropriate behavior from another member can report them immediately.

Created by Members of the Mormon Church

Mutual was created by members of the Mormon church for members of the church. Tiah explained that the app thrives because of the community that Mutual has created. Members have the opportunity to submit new feature ideas and provide honest feedback on ways Mutual can improve. Based on the feedback given, the team maps out how the company should move forward.

“We’re constantly improving and releasing new features as they’re recommended. Feedback.mutual.app is where you can see what members of our community have recommended,” Tiah told us. “Members can see what the plans are and what will be changing and what the roadmap is.”

Because the app was created by church members, they know exactly what other LDS singles want and need out of a dating app. Mutual features help users filter out other members based on criteria such as height or age. This helps members find compatible matches promptly and without having to go through an endless array of incompatible profiles.

“No longer do I have to swipe through hundreds of profiles to find one that might be compatible. This app narrows the search to people with the values I was looking for in the first place,” said an anonymous Mutual user in a testimonial.

To keep the LDS community inspired, the Mutual team posts new success stories  on its blog every week. Tiah said that it’s always great to have that positive response and shared feedback.  “It helps keep us on point and reminds us this is why we’re doing it — we’re creating relationships and families,” she said.

Mutual is the Number One Dating App for LDS

Mutual has risen rapidly to become the number one dating app for LDS singles. The team is actively finding ways people can make genuine connections. In addition to the popular dating app, mutualDates is a secondary app that partners with Utah restaurants and businesses to promote safe date experiences curated and priced for couples. The app offers suggestions of affordable places where singles can meet. This takes the stress away from members who struggle with date planning.

The mutualDates app started as a feature on Mutual, and it was so popular among LDS singles and couples that the team decided to build the standalone app.

“We’re always going to be making it better and be working toward making it more of what our community wants. We do a lot of testing and get user feedback,” Tiah said. “As we see needs or ways to increase someone’s experience that’s what we want to do. Our goal, in the end, is to create eternal and lasting marriages.”

Anyone can join the Mutual app at no charge. To access exclusive new features, members would have to upgrade their membership to a Mutual Up subscription. The Mutual Up upgrade allows members to see who swiped up on their profile and gives them a profile boost to be seen more often. Mutual Up subscriptions start at $7.99 a week, with monthly packages available as well.

“After a few months on the app, I met the most amazing and incredible man. In the few pictures he had on the app he looked cute and looked like he could be a good friend. After a few weeks of talking, we decided to meet in person and 6 months later we got married!” shared a Mutual user in a review.