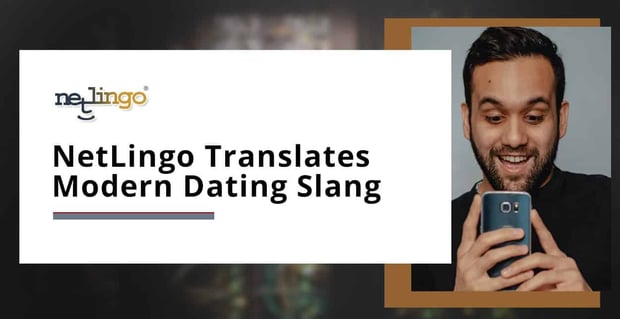 NetLingo is an Informational Resource for Translating Modern Dating Slang

The Short Version: NetLingo is the GOAT (greatest of all time) when it comes to discovering and defining the text acronyms that people bandy about on the web. Erin Jansen founded NetLingo in 1995 to explain tech terms to new internet explorers. Now the site offers the ultimate reference guide on the abbreviations and shorthand that many digital natives use when communicating through texts, emails, hashtags, and online dating messages.

Ever feel like you need a translator just to read your online dating messages? You’re not alone. Sometimes people throw out abbreviations, emoticons, or jargon that seem RAF (random as f***), and it can be confusing to grapple with such a fast-changing lexicon on your own.

Fortunately, NetLingo has the resources to make sense of the alphabet soup in your inbox. This website’s online communication and slang experts have figured out what modern users are talking about — and they can explain why you don’t have to call an ambulance when an online crush says “dead” or “I’m ded.”

A quick search through NetLingo’s online dictionary would tell you that dead is an expression meaning, “this is so hilarious that I could die laughing.”

Since 1995, NetLingo Founder Erin Jansen has been growing her slang database to include everything from a hacker’s 1337 speak to a dater’s NSFW (not safe for work) terms. Today, NetLingo boasts having the world’s largest collection of online acronyms.

Erin keeps up with changes in how people express themselves online, so users aren’t left thinking WTF about unfamiliar jargon. The newest words on her radar include VILF (voters I’d like to f***) and mood, which basically means “I feel that way too.”

“Acronyms have always been an integral part of computer culture, and they have since spawned a new language,” Erin said. “Knowing internet technology and online communication is no longer a luxury — it’s a necessity.”

NetLingo’s acronym list can deliver simple explanations for the internet’s ever-changing lingo. You can scroll through the list to learn new ways to express yourself online. That way, you can confidently use “DYHAB” or “DYHAG” (do you have a boyfriend/girlfriend) to flirt with someone through text messages. And you’ll know to respond to 143 (I love you) with 1432 (I love you too).

According to NetLingo’s research, daters actually have 36 ways they can say “I love you” by using text abbreviations.

NetLingo also offers a specific list of online dating terms that can come in handy for singles navigating the swiping scene and trying to Tinder their way into a relationship.

NetLingo organizes texting terms and online slang by category to make it EZ to surf.

NetLingo can demystify terms for widespread dating habits, and sometimes its definitions put words to some negative trends in the dating world. For instance, if your mutual match gives you a backhanded compliment, that’s called negging. It’s a tactic used by manipulative singles to make you feel insecure about yourself.

Gaslighting is another potentially dangerous dating phenomena where a romantic interest twists the truth and tries to make you question your own perception of events. As in, “He tried to gaslight me into thinking I was the reason he cheated!”

A baeless (aka single) person can get Erin’s NSFW Little Black of Acronyms to further delve into the slang of love. The book expounds on sexting terms, crude humor, and profanity used by adults in the modern dating scene. With this book as a guide, online daters won’t miss a beat in text conversations.

Singles often text their crushes throughout the day every day to turn their textlationship (a text relationship) into an IRL (in real life) romance. These chats often involve parenthesis smileys and winky faces. So, your emoticon game had better be on point if you want to impress your date and express your emotions with pictures that are worth 1,000 words.

NetLingo doesn’t leave singles hanging when it comes to the range of smileys that can be used on the web. Its comprehensive list includes straight-on smileys (meaning you don’t have to tilt your head sideways to see it ^-^) and emoticons that imitate public figures. According to this list, (y):-p is code for Donald Drumpf and (8{ is John Lennon.

A simple =) can put a smile in someone’s inbox and on their face.

A smiley is a great way to convey tone in a text conversation. It can lighten the mood or soften a sentence so online daters don’t come off too aggressive or serious when asking, “Are you free tomorrow?” or telling someone “You look hot.”

“Smileys usually follow after the punctuation, or in place of the punctuation, at the end of a sentence,” Erin explained. “They’re also called emoticons because they are ‘icons’ that convey ’emotion.'”

NetLingo doesn’t shy away from risqué or raunchy slang in its quest for clear internet communication. The website has reference guides for boobiecons and assicons, and it shows how a creative combination of parentheses, periods, and other punctuation marks can be used to look like body parts.

This list can come in handy when quickly describing a date’s appearance to a friend via text, or it could be a good way to get a sexting partner’s attention online.

These days, a lot of seemingly innocent emojis and emoticons have been repurposed for sexting. Some of them are obvious like a banana or an eggplant standing for a penis. But others are harder to understand without context. And that can lead to some confusing flirty exchanges.

For example, my friend used to think guys meant “peachy keen” when they sent her a peach emoji — when in reality they were admiring her butt!

NetLingo can clear up these confusions by offering a frequently updated list of popular dating-related emoticons and their true meaning.

NetLingo is the oldest website that specializes in identifying, defining, and explaining internet jargon and acronyms to everyday users. Its founder Erin is always on the hunt for new terms, and she encourages online citizens to submit slang words and acronyms that are worth adding to this constantly growing list.

Online daters can look to NetLingo for help in understanding what dating profiles, text messages, and emoticons really mean. That way, they’re never at a loss for words and can give someone the feels in 42 characters or less.

Having a good command over internet jargon and abbreviations can make online daters feel more confident when sliding into someone’s DMs (flirting by direct messages) and building texting chemistry.

“NetLingo is unique because it’s written by a woman using layman’s language,” Erin explained. “We have the largest list of text and chat acronyms, and we offer a service that is organized to educate, entertain, and empower you.”