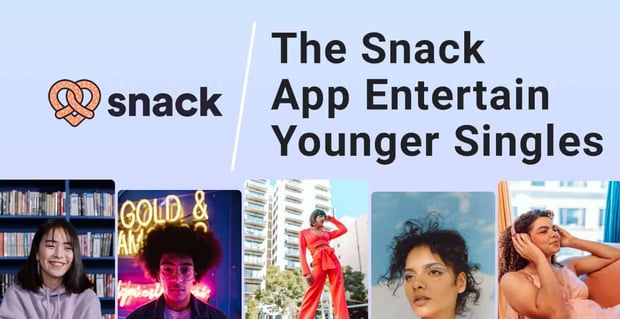 The Short Version: The online dating app Snack says goodbye to misleading photos and written prompts, and instead uses videos to help younger singles meet people in a genuine and entertaining way. Just like a favorite snack that doesn’t disappoint, the Snack app helps bring the fun back to dating with nothing but good vibes. From easy flirting to swapping out selfies for video profiles, Snack is not your ordinary dating app.

When the COVID-19 pandemic started, the world changed in more ways than one. The younger generation hopped on their devices and gave online dating a try because meeting in person wasn’t feasible at the time. Since 2020, online dating has skyrocketed as people discovered how convenient and effective it could be.

Inspired by a mission to reinvent dating for the next generation, entrepreneur and CEO Kimberly Kaplan created the online video dating app Snack.

While working on the Plenty of Fish team for 10 years, Kim learned how the industry works and how it could be better. Kim took the lessons from her experience at Plenty of Fish to guarantee that Snack brings the extra to the ordinary.

Kim and the Snack team diligently work to make Snack an experience members will never forget. Snack encourages members to show off their personalities through videos.

“I had this lightbulb moment when I saw a TikTok video of a woman trying to use the app to date, and I thought: video dating is going to be the next wave,” said Kim. “When you look at Gen Z, everything is video first — they have as many videos on their phone as millennials have images.”

The idea for Snack may have started as “TikTok for dating,” but it has become so much more thanks to the engagement and personalities of its users.

Young daters who are burned out from using the traditional swiping apps can take advantage of Snack’s modern method to meet and mingle with people.

A snack is a new Gen Z term that means someone is cute. It’s not a word commonly used in parental circles. You could call your mom a snack, and she probably would give you a confused look. The older generation may not get it, but younger singles are excited that the Snack app offers a fresh chance to find a snack at no charge.

Snack is an inclusive app with many options for nonbinary gender identities and individual gender selections that can be updated at any given time. Many users praise the team for creating such a welcoming shared space. Kim told us that, within just six weeks of launching, the app received its first success story.

“The support and excitement have been unbelievable. I fundamentally believe there’s an opportunity for this to be the next Tinder. The selfie era was all about the perfect version of yourself; Snack is more ‘Here’s who I am, unapologetically,’” said Kim.

Snack encourages users to be expressive and creative by showing off their personality through videos. As on TikTok, users get the chance to showcase their hidden talents, lifestyle, and hobbies. And by participating in video-first dates, users can feel more relaxed about online dating and worry less about the possibility of being catfished.

“This app combines Tiktok and Tinder in a super creative way! It also is an app that lessens the likelihood of getting catfished because it’s video-based and people can show their personalities/talents,” said a user on the Snack app in a review. “It’s awesome to also have the fun truth or dare game that gives you things to talk about and share with potential matches.”

Flexing Off Your Camera Roll

Members of Gen Z love to share their experiences by showing off their stored photos and videos. Luckily for them, the Snack app enables members to flex what’s on their camera rolls. It’s a great way to introduce yourself and get to know other members as well. From food videos to videos of your trip around the world, there’s always something to capture and share.

Because it’s an anti-swiping app, Snack takes a different approach to connect people. The new generation can enjoy that there is nothing traditional about the app. Swipes don’t exist on the app. In fact, Kim told us that members who try to swipe right or left on the app receive a quick reminder that ‘swiping is old af.’

The Snack dating app works like TikTok in that it relies on a video feed to engage users and start conversations. Snack is a show not tell kind of app where written bios are nonexistent. Instead, it prompts users with cool incentives and questions that help them reveal something about themselves through a video.

“Watching a video, even for a few seconds, forces you to be more intentional about the decisions you’re making versus the low intent of swiping on a photo. Curated photos get stale fast, especially for Gen Zers who constantly update their feeds and share their experiences,” said the Snack team.

Snack implemented a post-match, anti-ghosting feature to ensure that users feel safe on the app. Users on the app don’t end up dating every person they meet, and that’s OK. Sometimes the chemistry just isn’t there, and it’s time to move on to other options. Users who don’t want to chat it up anymore with another member can kindly ghost them, with no hard feelings, but the app will keep track of such ghosting habits.

Kim told us that Snack doesn’t worry about light ghosting now and then, but it will penalize users for chronic ghosting. Chronic ghosting creates a negative experience for everyone else on the app – and the team does something about it.

“The more you ghost (leave your matches on read), the less your profile is seen,” said Kim. Those chronic ghosting users are eventually weeded out of the user base to ensure that everyone on the app receives the respect and experience they deserve.

Snack: Not Your Parents’ Dating App

The Snack app is not for singles your parents’ age — the new generation finally has something to themselves! Younger singles can feel comfortable knowing that 50-year-old creeps are forbidden from using the app. Snack’s target audience is older Gen Z’s and young millennials based in the U.S. The app is exclusively available only to people from the ages of 18 to 35 years old. Such singles are familiar with new social trends and are open to trying a new version of dating.

Kim said that the app was designed strictly for a young age group so the Snack app team can effectively lean in and super-serve this demographic. The app speaks the digital language its users understand which ensures better quality matches.

The Snack team’s main goal over the next year and beyond is to become the go-to dating app for young singles. Snack strongly believes that dating is supposed to be fun. So the team is looking forward to making the Snack experience easier for members to enjoy, laugh, and engage with other people.
“I love the concept of the app! You pretty much get to post videos similar to TikTok and you have the opportunity to match with others that you swipe on,” said a user on the Snack app, in a review. “I love how you get to know someone’s personality better through a video rather than just photos. This app really focuses on the younger adult generation which is super engaging.”