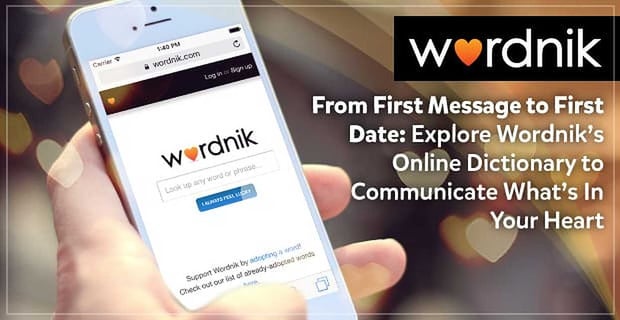 From First Message to First Date: Explore Wordnik’s Online Dictionary to Communicate What’s In Your Heart

The Short Version: Words matter. The right word can bring people together, just as the wrong word can tear them apart. What you say (and how you say it) can tell someone a lot about who you are. So, to make sure you’re putting your best word forward on a date, you can use Wordnik, an online compendium of over 8 million words in the English language. This interactive dictionary is the largest collection of words in the world and an endless playground for wordsmiths and conversationalists. If you hanker after uncommon verbiage, or if you wish you could express yourself more clearly on a date, try browsing the extensive catalog of words housed by Wordnik.

For many women, online dating means weeding out guys from overflowing inboxes. Sometimes, the decision to delete a chat is pretty easy. I once got a message that read: “Hey, I bet we’d have a riviting conversation.” No, I don’t think we will. Points for using a three-syllable word, but bad spellers need not apply.

Spelling mistakes like “riviting” are distinctly unattractive to me — and I’m not the only single gal out there who feels this way. Grammarly partnered with eHarmony in a study delving into the relationship between online daters and the written word. According to the results, a man’s chances of getting a response increased when he had fewer spelling errors in his dating profile. In other words: good grammar is hot & spelin errorz r not!

To build your vocabulary and up the quality of your messages, you can refer to online literary tools like Wordnik, the biggest dictionary in the world (by number of words). This site was made to capture the essence of the English language, one word at a time. The team gives readers the chance to view words from multiple angles through sample sentences, clear definitions, lists of synonyms, etymology, and visuals for over 8 million words.

Wordnik users explore word definitions in many ways, including visuals and contextual examples.

If you want to attract attention on a dating site or keep your messages from being overlooked, you have to know what to say (and how to spell it). Wordnik is a comprehensive resource to study up on the meaning, history, and beauty of words.

They have also made their technology available to more than 20,000 software developers who have used their API to create educational apps as well as apps to cheat at Scrabble.

“I love words, and I love collecting words. Every day I discover a new word that I didn’t know existed,” said Erin McKean, Founder of Wordnik.com and proud lexicographer. “When you think about words, you can make beautiful expressions from very humble parts.”

Over 8 Million Words: The Biggest Collection on the Web

In the spring of 2007, Erin McKean, who’d worked as Editor-in-Chief for the American Dictionaries for Oxford University Press, gave a TED talk about the joys (and struggles) of lexicography. “Deciding what words are good and what words are bad is not easy or fun,” she said. In her view, a dictionary shouldn’t leave words by the wayside, but print is too inflexible to keep up with common vernacular. “The book is not the right shape for a dictionary,” she maintained.

Erin saw the physical limitations of editors standing in the way of wondrously inventive words, like “bae” and “fleek,” and she wanted to set language free.

Erin McKean, Founder of Wordnik, speaks with a command of language. Photo by George Hall.

“Paper is the wrong container for the English language,” she argued. “It’s too small. It takes too long.”

Someone in the audience was listening attentively and thought she was on to something. Roger McNamee, an American investor, soon approached her about forming a tech startup to construct a more versatile and comprehensive dictionary on the web.

After spending a few months planning and putting a team together, they started Wordnik in early 2008. The site launched in beta in June 2009.

What began as an editor’s daydream is now a nonprofit organization gathering, sharing, and celebrating words. Their daunting mission is to collect every word in the English language and make it freely available online. Today, Wordnik has data about more than 8 million words, so anyone can learn how to spell, pronounce, and use any word with confidence and panache.

The written word is a slippery thing, defined and shaped by the speakers, so the meaning of a single word can change dramatically over time. Formal dictionaries don’t stay accurate for very long, and it’s literally an editor’s nightmare.

Wordnik’s solution is to be an interactive dictionary with free-range definitions based on actual usage. The site emphasizes context by data mining sentences that connect the word to ideas and define it by using it. “Most people learned most of their vocabulary not by looking it up in a dictionary,” Erin reasoned, “but by reading and hearing example sentences.”

The site offers a broader scope of meaning, with options to define, relate, list, discuss, see, hear, and love any word you care to look up. On the Define tab, example sentences accompany traditional definitions so readers understand both what the word means and how it’s used in books, newspapers, and articles. On the Relate tab, daters can keep their compliments fresh and unique by searching through lists of resplendent, stunning, and exceptional words.

Wordnik users find joy in the discovery of new words to add to their repertoire. There are no dearth of words here. You can peruse the Word of the Day, look up a Random Word, view a word map, and favorite your most cherished words. Additionally, visitors can explore more than 40,000 word lists generated by the community, and the Wordnik blog highlights words of the week on Word Buzz Wednesday.

Whether you’re looking for a conversation starter or a particularly impressive word to keep in your back pocket on a date, this online dictionary can help. On Wordnik, you can direct your own word adventure, and the journey can help you make a memorable first impression. It’s not about acing the SAT on a date, but feeling confident that the words you choose will showcase who you are as a person.

A Core Community of Loquacious Loyalists & Lovers of Language

Wordnik is a fun place to comment and commingle with people who enjoy a little wordplay. The community rallies around interesting, beautiful, and strange words, sharing a sense of admiration for remarkable strings of letters. “If you like Wordnik, you really like it, is what we’ve found. There’s a core group of users hanging out on the site,” Erin said. “One of our members writes a limerick every day on our Word of the Day. It’s amazing — he’s such a fantastic human being.”

“The bird as a whole is a boon treat/But remnants are what we will soon eat/In fragments instead –/In fritters, on bread,/And finally we’ll sip it as spoon-meat.” — qms, a limerick-loving commenter on Wordnik

On Wordnik, a loyal user base explores the nuances of language and gleefully discusses obscure words like “octastyle” and “fenestrate.” The site is a safe haven for word nerds like me. Because, after a while, it’s tiresome to hear yet another person mistake the word “bibliophile” on my profile to mean that I am at all interested in talking about the Bible.

Erin loves watching engaged Wordnik users interact on the site because she believes language is inherently communal. “What we’re really about is sharing words. Words live and die by popular demand,” she maintained. “The English language belongs to everybody who speaks it, so your opinion about a word is valuable.”

Give the Gift of an Adopted Word to Show Personality & Creativity

The Wordnik community adores words, and the site feeds the fanaticism with an array of unique features. Members are encouraged to support the site by adopting a beloved word. When you adopt a Wordnik word, you’ll get an ad-free experience and have your name posted on the word’s page. You can also link to your Twitter handle or website.

Wordnik has sent downloadable commemoration certificates and stickers to nearly a thousand people who have adopted peculiar, meaningful, or even romantic words. For impassioned intellectuals, an adopted word can be a touching present.

Will Claiborne gifted his wife, Christine, with the word “teacher” to recognize how she embodied the word in her career and her life. If you’re looking to give someone a thoughtful and unique gift, consider donating to Wordnik to put your love’s name on a word that describes who he or she is, like “compassionate” — or a word to give you both a giggle, like “flibbertigibbet.”

Words are the bricks we use to build understanding, respect, and connection. The right words can convey your personality and your intentions in the best possible light. If you want to have a truly riveting conversation, build your vocabulary and your command of language. Wordnik can be a useful tool for communicating more persuasively in messages and engaging in deeper conversations with your dating prospects.

On Wordnik, love of letters leads to connection.

By referencing Wordnik, you can pick out the exact words to flatter, interest, or attract the person you desire. Online daters don’t need to feel intimidated by big words on a profile because they can look them up in the world’s biggest dictionary and use that knowledge as a way to connect on a deeper level than simply saying “Hey, how are you?”

When you sit down to write your dating profile or fire off a first message, don’t just spew out words stream-of-consciousness style — instead, take the time, care, and effort to really think about what you want to say and how best to say it. People can tell when you put that extra thought into your words, and it absolutely makes a difference.