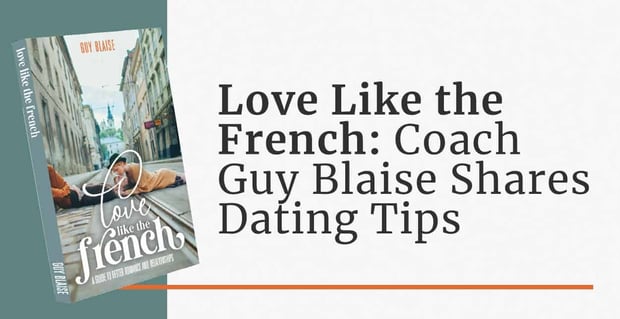 The Short Version: Author and Dating Coach Guy Blaise has answers for women and other daters who want to know what’s going on in a man’s mind. In his new book, “Love Like the French: A Guide to Better Romance and Relationships,” Guy answers some of the most common questions about love from his unique perspective. He offers advice with a dose of humor and kindness to Americans who want to stop settling for less and creating the relationships of their dreams.

Women and other daters interested in men may try scrolling through Tinder, searching at bars, or even attending speed dating events to find a partner. But when they do find a relationship, the challenges don’t end there — especially if they want to connect on a deeper level.

That often takes commitment and understanding, which can be difficult if they don’t know what’s going on in the other person’s head, or what they want themselves.

Dating Coach and Author Guy Blaise helps readers solve those mysteries with his new book, “Love Like the French: A Guide to Better Romance and Relationships.”

An outsider’s view can help make sense of the modern American dating world and its unique concepts of love and attraction. That’s where Guy comes in. His book, based on letters he received from writing his popular blog The French Perspective, is filled with advice that shines a fresh light on cultural — and gender — differences.

Guy learned from the strong women in his family while growing up in Eastern France and Paris. He listened closely to the wise advice of his grandmother who helped to raise him as a boy. When he moved to America, he realized just how valuable that perspective was, and now aims to empower other women with his writing.

His new book demonstrates the stark cultural differences between Americans who identify as men — who, Guy explains, were never taught how to love well — and French men, who are known for romance.

Guy answers questions from his readers with humor and compassion and shares anecdotes from his personal life to clear up the confusion many have about dating and relationships.

Answering American Questions on Love From a French Perspective

When Guy moved to the United States about 20 years ago, it was clear that many American men didn’t understand that romance started well before intimacy. He also experienced significant cultural differences and decided to share what he knew with confused American women.

As a dating coach, he’s published several books, including “Vive la Difference: A Frenchman’s Perspective on American Women” and “Love, Respect, and Relationships.”

He knows how to help people focus on what’s important. Guy left an abusive marriage after years of trying to make it work. Now, he enjoys spending time with his son and four daughters. He also practices martial arts and studies anthropology. He said he believes both men and women should have many hobbies to stay interesting to their partners or dates.

His new book also speaks to women and LGBTQ+ individuals who are having a hard time finding dates. In fact, the first letter in the book asks about something nearly everyone romantically interested in men has encountered: the dreaded dick pic. This phenomenon, it seems, transcends boundaries and cultures.

“A dick pic is a man’s misguided way of offering you the chance to imagine the many orgasms you could experience if you were to give him the opportunity,” Guy writes in the book. “A confident, mature man will not find it necessary to share a picture of his genitals to attract a woman’s attention but, rather, he will rely on his intellect, humor, and accomplishments. Sadly, immaturity can be found at any age.”

“Pour savoir, il faut demander,” he quotes from a French proverb which translates to “To know, you have to ask.”

In his response, Guy writes that the reader should not just brush her finding under the rug. He shares a story about a woman he once dated whom he discovered was romantically interested in other women. Eventually, the relationship ended, but not until the couple had a series of intense conversations about her secret and their future together.

Much of his advice in the book is based on the simple notion that singles and couples must communicate their expectations, values, and life goals whenever they face challenges in their relationships. And sometimes, there’s nothing left to say — such is his advice to a reader who confides that her husband is a verbally abusive alcoholic.

“I hope that the fear of being alone and fear of the unknown won’t prevent you from leaving him if he doesn’t seek help. Sometimes it is good to be selfish,” he wrote. “My advice is that you act sooner rather than later and make every effort to intervene before his problem becomes more severe.”

Guy Blaise: To Find a Perfect Match, Stick to Your Standards

In “Love Like the French: A Guide to Better Romance and Relationships,” Guy helps women and others interested in men understand their own value. According to Guy, sometimes knowing what you want is the best way to attract the right partner.

One reader asked whether she should consider lowering her standards to find love, something she said she finds harder with each passing year. He said only the person can know if he or she is being realistic.

“Since I do not know your standards, I suggest you write them down. Yes, make a list!” Guy advised. “Be honest with yourself; you will be glad for this in the long run. In the meantime, continue to challenge and love yourself for you. A partner should be a person who enhances our already-fulfilling lives, not someone we rely on for our happiness.”

Once someone finds love, it’s also essential to stick to those same standards. Another reader wrote that she felt like her boyfriend was too critical and wondered if she should leave him.

“You deserve to feel liked and loved by your boyfriend, and he deserves to know how he is making you feel,” Guy wrote. “Give him an opportunity to make corrections. If he doesn’t do anything differently, you have your answer.”

He used an example from his own life to clarify his point. In the book, he shares intimate details about his ex-wife and her mother, who didn’t approve of him and even spoke in German to exclude him.

“I know what it feels like to never get anything right,” he wrote. “When you love someone, you never stop reminding them of how glad you are to have them in your life. The smallest act of appreciation refills the heart and strengthens the bond.”