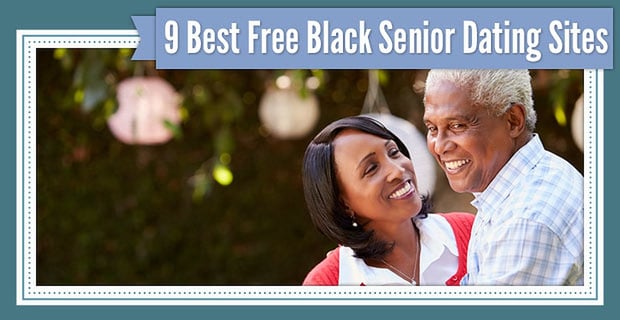 As of 2014, approximately 4 million African-Americans were 65 or older, making up 9% of the older population, in general. According to the Administration for Community Living, by 2060 those numbers are projected to grow to 12 million and 12%, respectively.

When you exclude the people who are married or already in a relationship, those numbers dwindle, and that can be kind of depressing for single black seniors — particularly those who want to date someone of the same race and within the same age range. We’re stepping in, though, to show them that dating doesn’t have to be a lot of work. Thanks to these nine dating sites, it can actually be really easy and enjoyable to meet someone on your terms.

On Match, you’ll find more black singles, senior singles, and black senior singles all in one place than anywhere else in the world. Since launching in 1995, Match has had 42 million signups and counting, and the site gets almost 40 million visitors a month. Once you create a profile, which is free to do, use Match’s basic and advanced search features to sort its members by age and race as well as gender, location, sexual orientation, religion, appearance, and interests, among other filters.

With 2 million monthly visitors, 165,000 monthly signups, 2,500 members finding love every month, and a one-of-a-kind personality assessment, EliteSingles definitely has the numbers on its side. However, EliteSingles isn’t only about quantity — it’s also about quality. Each match suggestion is carefully selected by the site’s algorithm, so you’re more likely to agree that it’s a match on EliteSingles than on other appearance-based dating sites and apps.

SilverSingles, a sister site of EliteSingles, is one of the most popular mature dating sites around. The site has more than 85,000 monthly visitors (with more joining every week), and the app has more than 3 stars on Google Play. In addition to the numbers, SilverSingles says that its community is exclusively made up of over-50 singles, its matchmaking algorithm truly works, and its process is stress-free.

In 2000, eharmony took the online dating world by storm because it was unlike many of the dating sites that came before it. Founded by clinical psychologist, Christian theologian, and seminary professor Dr. Neil Clark Warren, eharmony is for commitment-minded, religious daters who prefer the dating site to take the wheel in terms of finding matches. All you have to do is check your inbox for recommend profiles, and then you can either pass on the profile, initiate the conversation, or wait for the other person to initiate.

OurTime is part of the Match Group family, along with Match, OkCupid, PlentyOfFish, and numerous other dating sites and apps. It’s well-established, reliable, affordable, and a lot of fun to use. OurTime can be downloaded in the App Store and Google Play Store, or you can register on a desktop. Both options are 100% free. It’s also free to browse, receive matches, and communicate by sending virtual flirts or winks.

A lot of single black and biracial seniors turn to BlackPeopleMeet because it has a large — yet targeted — audience, it’s free, and it’s safe. One former member named ItsPBsWorld84 said in a testimonial on Google Play, “I was fortunate enough in six months to meet some really nice guys — none in which I would’ve crossed paths with anywhere else. But only one stole my heart. Thanks, BPM, for allowing me the opportunity to connect with my future.”

Age, race, religion — these are among the top dating preferences and/or dealbreakers. If you’re a black Christian senior who also wants to meet a black Christian senior, that may seem like a difficult task, but thanks to ChristianMingle it’s not. Here, you don’t have to compromise or sacrifice on your must-haves because you have millions of people who can meet your needs.

Founded in 2005, SeniorBlackPeopleMeet connects black and biracial singles (as well as those interested in interracial relationships) for all kinds of companionship, including friends, dates, and marriage. The site also provides short articles that are written by its team of experts and cover a variety of topics, including how to stay safe when you’re dating online and offline. One success story we wanted to share is from a user from Inglewood, California: “I am dating a man who I met on your website, and our relationship is growing. Thank you!”

Based out of Ontario, Canada, BlackSeniorDatingSite strives to help you “find your perfect match today.” From virtual winks to private messaging to verified members to live support, BlackSeniorDatingSite offers a ton of helpful features for making the right connection. For those new to online dating, it may be worth checking out the site’s blog posts, including “How to Meet Quality Black Singles Over 50” and “Why You Should Think About Senior Black Dating.”

The world is growing in diversity, and that’s great news for singles looking for partner. Sometimes black single seniors may struggle to find one another, but technology can fill the gap. The nine dating sites on this list have been designed to help singles find someone who’s exactly their type. They’ll help you meet who you want, when you want, and how you want — all without costing you an arm and a leg. Choose wisely!