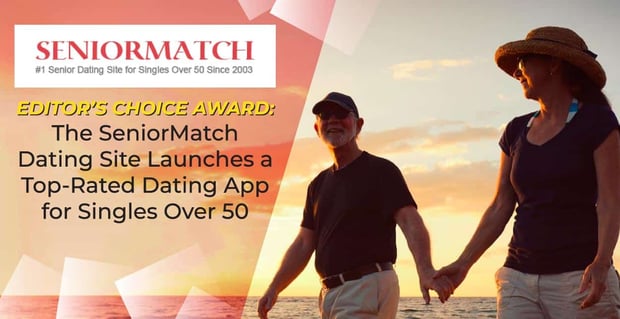 The Short Version: Since 2003, SeniorMatch.com has been a secure dating site where singles in their 50s, 60s, and 70s can feel comfortable being themselves and creating genuine relationships. The niche site has connected millions of singles around the world — and the newly launched SeniorMatch app is designed to connect millions more. Mature daters can use this convenient tool to stay in touch with their daily matches and set up dates wherever they go.

Whenever I went through a breakup in high school, I’d find comfort in the old saying, “There are plenty of fish in the sea.” I’d remind myself that I was constantly surrounded by great catches in my everyday life. I could cross my ex’s name off my textbooks and find a new romance in my classes or after-school clubs.

However, the more time passes, the less true that truism seems. First of all, the world is actually losing its fish population as the ocean warms up. Secondly, a single person’s dating prospects naturally dry up as they get older and their peers marry and build families.

SeniorMatch’s site and app have earned the trust of millions of men and women.

Senior singles can sometimes feel as if they’re the only fish the sea simply because they don’t have easy access to a large dating pool. Fortunately, niche dating sites, like SeniorMatch, can bring them together and give them the resources they need to thrive.

SeniorMatch is a safe and comfortable online community where senior singles can feel right at home. The dating site is free to join, and it offers easy-to-understand search and matching tools to help you start again.

In the last 15 years, over 2.7 million people have joined SeniorMatch in search of friendship, romance, and love, and the team has seen countless relationships blossom. The dating site has become so successful and popular that the team has expanded into the mobile world with a newly released app available on Google Play.

“SeniorMatch.com has been trusted by millions of senior singles since 2003,” said Jori Wang, a spokesperson for the dating service. “Now we’re so glad to tell you that the website is now available as an app on the Google Play Store.”

Mature Daters Give the App 4.7 Stars & Praise Its Safety Features

SeniorMatch is among the largest senior dating sites around, so it’s exciting to see this vast network breaking into the mobile dating scene as well. The dating site already has a strong mobile audience — about 39% of users sign up using their phones — and having a companion app to the site should only bolster online activity.

The new SeniorMatch app represents a world of opportunity for senior singles everywhere. Thanks to the app, singles won’t have to rely on their desktops to hook them up to the online dating scene — they can receive match suggestions and messages conveniently on their phones. SeniorMatch currently sees over 20,000 active users, and the team expects that number to grow larger now that singles can access SeniorMatch on their smartphones.

“It’s easy to meet senior people around you,” said Nuri Wynn in a review. “Anyone can message you — you don’t have to match to message someone. There are lots of different people.”

SeniorMatch can spark instant connections between singles over 45.

Since its early days, SeniorMatch has cultivated a global audience of seniors. Over 71% of its members come from the U.S., and the rest hail from Canada, the U.K., Australia, and other countries. The majority of users (64.88%) are between 55 and 65 years old. SeniorMatch does not allow anyone under 45 to join its network.

Like most senior dating sites, SeniorMatch has more women than men in its ranks. About 60% of members are female, while 40% are male.

The SeniorMatch team closely monitors the membership to ensure everyone is behaving appropriately and staying safe. Senior singles can be particularly vulnerable to romance scams, so this senior dating site takes precautions to keep the unsavory characters out. According to its internal data, the site blocks over 38% of signup attempts after a manual review.

“We want to ensure the best quality for our members,” Jori said. “Singles over 50, especially those who are living alone, feel much more comfortable and supported here on SeniorMatch.”

SeniorMatch has been making matches and facilitating conversations between age-appropriate daters for over a decade now, and it has hundreds of success stories to its name. These successes come in all shapes and sizes. Some couples say they met thanks to the site’s matchmaking system, while others say the senior-friendly dating experience helped them build confidence or make new friends.

The bottom line is that SeniorMatch can decrease the loneliness in the lives of seniors, and that’s a pretty powerful thing. According to the AARP, 1 in 3 adults over 45 are lonely. Some are grieving the loss of a loved one, while others are picking up the pieces after a divorce, and they could use a safe place to start again.

SeniorMatch can be the reset button for seniors seeking new relationships. As part of the SuccessfulMatch network, SeniorMatch has a lot of resources and expertise at its disposal.

SuccessfulMatch launched SeniorMatch in 2003 and recently created a companion app.

The team’s commitment to quality matches and customer satisfaction is the secret behind its success. SuccessfulMatch’s dating sites and dating apps meet the needs of specific types of daters and fill an important niche in the online dating world.

SeniorMatch members aren’t alone in their dating struggles because the SuccessfulMatch team always has their backs. Online daters can contact the SuccessfulMatch team by email or phone to give feedback or ask questions. The customer care team is available 24 hours a day, seven days a week. Members can also mail written requests to the company’s headquarters in Ontario.

By making helpful resources accessible to seniors and other singles, SuccessfulMatch has seen to it that members have a positive experience with its dating services.

SeniorMatch Connects Millions of Singles Across the Globe

If you’re fishing for a date in the senior dating scene, the SeniorMatch network can help you find promising prospects and reel in the right person. This niche site and app support a diverse global membership, thus proving that, no matter how old you get, there truly are more fish in the sea.

Many divorcees, widows, and never-married singles gather on SeniorMatch in hopes of connecting with age-appropriate dates, and some find themselves feeling like teenagers again as they flirt and fall in love. The new app offers even more opportunities to regain your confidence and build relationships one message at a time.

“SeniorMatch has got more than I expected,” said a user named Re Jia. “Dating here is just one possibility here. There’s so much more out there — I found friends and activity mates who share the same interests.”