Are You Dating a Cheater?

Recently I have had lots of correspondence from guys who have accidentally got involved with men who are either married or partnered.

This is a common issue, and it’s something I’ve encountered in my own dating past.

The world is full of cheaters – unfaithful men are found the world over – but don’t tar every man with the same brush. There are still some excellent guys around, and I’m sure you are one of them.

So, how do you tell if the guy you been chatting to, or been chatted up by, is married or partnered?

It’s not so easy to identify this by merely looking at the ring finger for that band of commitment (or the tan line where it’s been speedily removed).

Clues to identify if you are dating an attached man.

One is to state the obvious and ask, “Are you with anyone?” This is a straightforward question to ask and should save a lot of heartache.

If he is and he responds in the negative, you may pick up on the telling pause before he replies.

However, if he is an experienced cheater, then he’ll easily lie – remind yourself of this when you find out you were dating a player and a liar!

If he is with someone else, then I strongly advise you to dump the loser.

Don’t fool yourself into thinking it’ll be different with you. If he has been unfaithful once, he’ll do it again. That next person could be you.

The top five ways of identifying a cheater are:

1. He only calls you when he’s at work or on the move.

When you want to wish him goodnight or have a chat in the evening, he’ll be unavailable with a variety of excuses.

You will possibly be fobbed off by a quick text or email saying he’s tied up with something.

Sorry but one-minute “Hi, how are you?” conversation takes less time than typing out a text or email! Does he answer his phone when you call, or does it always go to voice mail?

“If he’s doing it to his current partner,

then he has the ability to do it to you.”

He won’t introduce you to any of his friends, work colleagues or family members.

Fair enough for the first few dates, but after a while, a casual drink out with mutual friends is normal dating progression for a new couple.

3. You won’t know where he lives or won’t be invited around.

He’ll use various excuses, such as the place is messy or a distant relative is staying. This can only put off a home visit for so long.

4. He never stays the night.

If you get to the stage of sleeping together, he’ll never stay the night.

Waking up to an empty bed is not a good foundation for a relationship, and it will leave you feeling like a booty call (which, let’s face it, you may well be).

5. He only plans dates spur of the moment.

When you suggest something spontaneous, he’ll be unavailable.

If you do fall into a cheaters trap, my advice is to end the relationship immediately. If you have concerns and he hasn’t admitted he’s in a relationship, act on those concerns.

Do not delude yourself by thinking it’s going to be different with you.

If a relationship is on the rocks, having an affair with you is not going to do anything to fix it for him.

As I mentioned at the start, if he’s doing it to his current partner, then he has the ability to do it to you.

Have you dated a cheater? If so, how did you handle it? 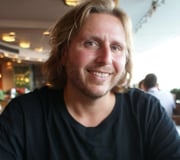 Cybersex: Is It Cheating?

Lay a Big One on Me! Kissing Tips for the Gay Dater