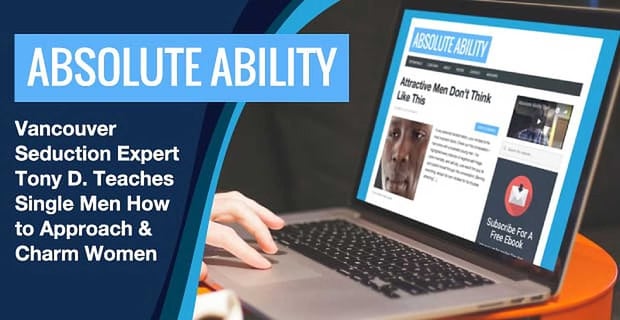 The Short Version: Tony D. wasn’t born a seduction expert — he had to practice to develop solid conversational skills and rid himself of his anxieties around women. After dedicating thousands of hours to charming women into going out with him, he turned himself into a fearless flirting machine. Then, in 2009, he founded Absolute Ability, an intensive dating coaching business that inspires single men to take control of their love lives and gain confidence in their dating skills. Tony now accompanies men out on the town in Vancouver, Montreal, or Toronto to show them how to approach and charm women using his proven seduction techniques. His down-to-earth mentorship and thought-provoking books offer men the tools to strengthen their dating games and become smooth conversationalists capable of wooing the hottest woman in any room.

Tony D. grew up feeling uncomfortable in his own skin. He suffered from a medical condition that caused an enlargement of his breast glands, particularly his nipples. Going shirtless was a no-go for him. Talking to women made him feel uncomfortable. His self-esteem was at an all-time low when he decided to make a change. At age 27, Tony underwent surgery to cut out his excess breast glands so he could finally feel good about his body.

His transformation didn’t stop there, though. He was determined to overcome his social anxieties in the dating scene. He forced himself to practice talking to women in bars, using pick-up lines until he felt comfortable starting a conversation on his own. He had panic attacks every time, at first, but he powered through it because he wanted to get better and knew it would only get easier with time. More often than not, women actually responded positively to him, and he began to enjoy himself.

“For me, it was about changing my mindset from one of a victim to embodying more of an alpha male,” he explained. “Basically, to take action rather than being passive.”

Around 2009, he joined a handful of men’s groups and forums to talk about ways to successfully approach women. The more he talked with singles, the more he realized he had a lot of real-time dating experience and feedback that could be helpful to others. So he began coaching single men to overcome their fears about the seduction game.

Today, Tony has written two books and half a million words on his blog about the modern dating scene. He also conducts in-depth coaching programs to show single men how to attract women in any social environment. He named his coaching business Absolute Ability because he firmly believes all men have it within them to charm anyone they desire.

Tony works alongside a team of coaches teaching out of Vancouver, Montreal, and Toronto, but he also travels around the world to give advice to men in Asia, Europe, and the US.

“You have to overcome the adrenaline rush and negative chatter in your head when approaching women. It’s practice makes perfect, really.” — Tony D., seduction expert and dating coach

Over the past decade, the Vancouver-based coach has taught many high-earning professionals about the subtle cues and conversational tricks that create chemistry and stimulate that endorphin buzz you get when you meet someone special. Tony told us he focuses on the initial phases of the dating process because it’s the basis of everything. Whether you want to take a girl home that night or spend the rest of your life with her, you’ve got to know how to chat her up and make her feel the same way you do.

“The seduction phase is the most important part of finding a mate because if you can’t do that, you can’t build a relationship,” he said. “My area of expertise is in approaching a woman and making her want to spend more time with you.”

Funny. Witty. Insightful. “A Thousand Tiny Failures” presents a fictional story rich with Tony’s dating wisdom and life philosophies. The plot focuses on a Montreal single who discovers an online community of pick-up artists and enters a world of parties, sex, drugs, and drama.

“Great read. Solid writing full of truth,” reviewed Sharpshooter of ReturnOfKings.com. “I would highly recommend this to any man looking to improve his life and insight.”

In “A Thousand Tiny Failures,” Tony delves into how he came into his own in the dating world and what lessons he learned along the way.

The fictional story is based on the author’s own personal experiences and offers a deep exploration of a single man’s struggles with self-esteem issues. It’s his story — but it’s every man’s story, too.

“My book defines who I am and what I do,” he told us. “And a lot of people, men and women, really seem to respond to that journey.”

Tony’s first book isn’t strictly about giving dating advice, but the open-ended narrative does have some important takeaways about a healthy self-esteem, positive thinking, and proactive dating habits.

His second book, “I Hope It’s Sunny Out,” is a more pragmatic self-help guide for meeting women in daytime settings. In it, he empowers men to make dates at grocery stores, coffee shops, and other places besides a bar or club.

During these intensive programs, Tony works one on one with clients ages 18 to 60 to help them develop savvy dating skills. How confident is Tony that his programs work? Confident enough to promise clients will gain Jedi-like abilities to win people to their side.

Instead of sitting down and giving advice, Tony takes his clients by the hand (metaphorically) and throws them into the dating pool. They actually go to parks, bookstores, clubs, and bars to practice approaching attractive women in the real world. Tony leads by example, making conversation and getting phone numbers so that his clients can see how it’s done — and then go for it themselves.

As they go from encounter to encounter, Tony encourages his clients and tells them not to let a single rejection get them down. “It’s exposure therapy, basically,” he told us. “The more you go out and approach women, the more comfortable you feel expressing yourself, which creates attraction.”

According to Tony, all it takes is a few days of real-world practice for his clients to see that dating isn’t scary, after all. Oftentimes, single men get rewarded with compliments by the women, which helps them get over their fears and actually enjoy going out and starting conversations with beautiful women.

“This guy is the real deal. He is passionate, authentic, and original,” wrote KL, a Vancouver client who learned the value of being direct and assertive by working with Tony. “He pushes you in a way that makes you want to go for and close the set.”

Tony said his bootcamps and mentorships yield fast results for men who feel stuck, hopeless, or unequipped for the dating world. “I think it’s the most powerful coaching program in the world,” he told us. “There’s nothing more transformative than the ability to connect with people anywhere.”

Tony’s testimonials page highlights the journeys of men who overcame their shyness, fears, and uncertainties in the flirtation game. Many of his clients are highly analytical and intelligent men who just needed to be pointed in the right direction when it comes to dating. Tony’s support and advice spurs singles into action and makes them feel confident in the pursuit of a hot date.

Andry found Tony’s website by chance and was intrigued by the coach’s hands-on teaching methods and his dismissal of pick-up lines. Reading Tony’s books only made Andry more of a fan of, as he puts it, the “simplicity and realism” of the coach’s dating advice.

So, when Andry met a friend in Vancouver a few months later, he made a point to email Tony and see if they could get together for a 30-minute consultation.

“Tony is truly masterful at what he does and makes sure to take care of his clients 100%.” — MC, a 26-year-old single in Montreal

“From this, I clearly realized that he knew more than I [did], and so I decided to take his bootcamp,” Andry said. “The exercises that Tony asked me to do, related to being in the moment, helped [me] regain a calm but positive attitude.”

Another bootcamp attendee named Seth Y. said the real-world, learning-by-doing coaching helped him develop the courage to cold approach women and the social skills to close the deal. After watching Tony work, and feeling in awe of the coach’s flirtation game, Seth went out and tried the same assertive techniques and got instant success. “It doesn’t just happen,” he concluded in his testimonial. “You’ve got to make it happen.”

“When a man can’t attract the kind of women he wants, it’s devastating to his self-esteem,” Tony said. “I’m just blessed and grateful that I can help men find their confidence and attract women in real-world situations.”

Tony battled deep-seated insecurities and dating anxieties in his youth, so he can empathize with the nervous men who come to him for help. He knows how intimidating it can be to start a conversation with a gorgeous woman, but he also knows the more you do it, the easier it becomes. His goal is to get men excited about going out and meeting women in a variety of social settings.

This dating coach practices what he preaches in terms of picking up dates, showing his clients how it’s done in the real world. As part of his mentorship and bootcamp programs, Tony accompanies single men on the prowl for dates to support them while they gain experience and build confidence talking to women. Whether they’re chatting at a bar or a beach, the men feel empowered by Tony’s flirtation techniques to take advantage of romantic possibilities in everyday life.

“I really think it’s up to individuals to change their own lives,” Tony said emphatically. “My value as a coach is in showing them what to do through example and motivating them to take action. The rest is all them.”