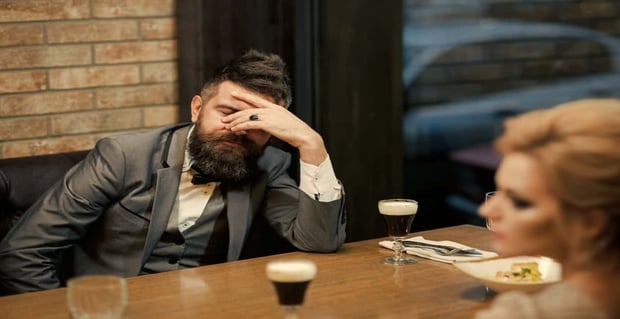 As a dating coach, I constantly hear how hard it is out there for singles — pandemic or not. From ghosting and breadcrumbing, to disposable dating and hookup culture, everybody seems to be lamenting how difficult dating has become.

It is my humble opinion that, yes, in fact, dating is harder for men. But most of this is men’s own fault, and the good news is that they are the ones who can make it easier for themselves. So let’s get into the particular challenges that guys face in dating and how to overcome them.

1. Men Feel Like They Have to Do the Initiating, and Society Doesn’t Help With That

I would say the hardest part of meeting anyone is initiating contact. The object is at rest and you need to exert a lot of effort to get that moving. I know that we’re in the 21st century and anyone can approach anyone, but I’m just saying that most of the time the guy is the one approaching or starting the conversation.

Men think they need to have the perfect opening line. First off, you don’t. As an exercise, I gave one of my dating coaching clients the choice to give me any sentence he wanted, and I would use that as an opening line when we walked up to the next group of girls. It was something inane, but it still worked because it’s not what comes out of your mouth — it’s how you say it.

Everyone thinks single men should always be the ones to approach single women, and it’s kind of unfair.

The first thing to do to make this easier is to shift your goal. Contact info, kissing, dating, sex, and relationships are all side effects. Side effects that happen when you are an interesting person. If you see a hottie across the room, don’t say to yourself, “I’m going to go see if I can take that girl home tonight.” You’ll come in with all sorts of weird energy, and it may not flow well.

Instead, if you say to yourself, “I’m going to go talk to her and see if I can make her laugh,” you’ll come in more relaxed, which will make her relaxed. And if the conversation starts flowing well, who knows, you may still get to take her home!

Any guy worth his salt has been turned down hundreds of times in his life. It can absolutely get draining, but men tend to beat themselves up mentally about it more than they need to.

This process really opened my eyes to the dating world, and it’s a lot about what I teach. The words we use in our heads are hugely important because they create our reality. For instance, let’s take the word reject. We use this word a lot right? “Dude, I totally got rejected!”

But, listen, you didn’t. To reject something, we need to know it, compare it with something else we know, choose one, and reject the other. It was not a rejection; it was just a non-starter.

What feels extremely personal really isn’t that personal. This woman knows nothing about you. In fact, maybe her cat died today and no one will be able to talk to her.

Another word we use is fail. “Oh man, you totally failed there!” If you tried something and learned something from that, you didn’t fail. You got better. If you go up and talk to someone and it doesn’t work out, what did you actually lose? Seven seconds. That’s it.

Everything else is in our head. That doesn’t mean it’s not real and not hard. It just means we have control over how we want to feel about it.

3. Women Tend to Be Better Communicators, and Men Should Practice That Skill

I know we all learn to speak, but not all of us learn how to talk. Specifically with others.

Men, historically, haven’t been the greatest communicators. Part of it is society telling us to man up by holding up images of what it means to be a man (think John Wayne). Another may be the role models men have in their personal lives — men who would never talk about their feelings.

The other part is that our brains just aren’t wired the same way. While many women may discuss their personal problems among friends, men tend to withdraw into their heads to process an issue themselves. Neither approach is wrong or right. It’s just different. But what I do hear from my female clients is that men just don’t know how to talk.

Men are often taught not to share their feelings, and that makes it harder to communicate with other people, which causes more problems than necessary.

Sometimes men are mono-syllabic, or sometimes all they can talk about is themselves. Other men will just run down the boring dating interview questions and answers and not bring any emotion to the table. Or they will just flat out ask completely inappropriate questions, thinking they were OK.

As with any other skill, you can practice this. Learn to ask open-ended questions. Share stories unprompted. Make sure you’re only replying in a few sentences, and lob a question back. Read a conversation book. Join Toastmasters. Try online speed dating. And pay attention to how people react to you. If you’re getting a smile or she’s leaning forward, you’re doing a good job.

4. Work to Make Yourself a Better Person

Following on the self-improvement comments, make sure you have done the inner or self-work that you need to do. This is basically making sure that you know yourself, or that you’re working on any issues or sticking points you have (including going to therapy). Be aware of the type of person you want to attract. Work out (or at least try to), and have a good idea of where you’re going and how to get there.

None of us are perfect, especially after last year. We can be works in progress. The point is that you’re doing the work.

Social stigmas have prevented men from putting as much time into this as women have. No woman wants to meet a guy who is a super rough draft. It’s not her job to fix you. It’s your job to be as complete as possible so you can offer the best of yourself to women.

5. Men Need to Be Good to One Another

If a woman gets an amazing blow-out at her local hair salon, the older lady next to her may say, “Wow, this style looks good on you!” Then the woman goes to Starbucks and the barista may say, “Girl, that hair!” and the woman says back, “I know!” Then the woman meets up with her friends at their favorite lunch place, and all the girls start fussing over her hair, telling her how great she looks.

What happened here is this woman received affirmations and validations from multiple strangers and friends. That feels good! For many guys, the only affirmations or validations they receive is from their mothers or girlfriends. (Which is why there’s some weird psychological overlap there, but that’s a topic for another day.)

Men can be so starved for affection or validation that when a woman just asks them a simple question or makes a simple observation about them, they desperately hold onto it and sometimes misconstrue “I’m just being nice” with “I am interested in you.”

Women are constantly asking how their friends are and complimenting them, and men should do the same to lift each other up.

If men can just be a little more open, vulnerable, and complimentary to each other as men, then they aren’t going to leave the emotional work and regulation to their mothers and significant others. It’s a win-win for everyone.

The world is starting to get back to normal and open up again, and people are venturing out more. People have had a lot of time to think about their lives, and many of them have realized what is important to them in dating and relationships.

So take this time to optimize yourself and get ready for release! One way or another, a lot of dating opportunities will surface this summer, so make the most of them.

3 Important Things to Remember When Your Relationship Has Changed