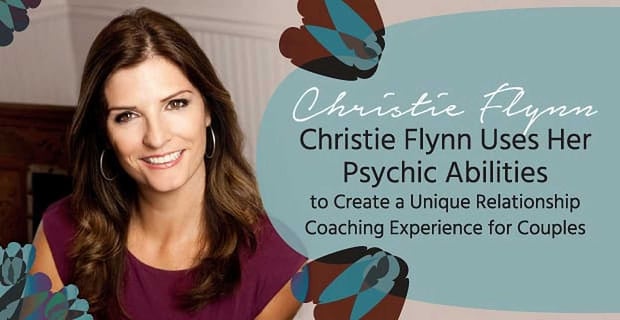 The Short Version: Christie Flynn’s world changed when her 26-year relationship ended while she was in her 40s. After learning so many lessons from her breakup and the world of online dating, she decided to write a book about her experience. Then, Christie began coaching people on how to find and keep healthy relationships. Using a technique called Emotion Code, Christie helps clients break free from the negative emotional baggage that can sabotage their relationships. Christie is also a psychic medium and uses her skills to read energy and enhance her coaching sessions. She offers standalone readings for those who want to communicate with their pets, loved ones who have passed, and debilitated loved ones physically unable to speak.

When Christie Flynn was in her 40s, a relationship she had spent 26 years building came crashing down. After picking up the pieces, Christie entered the world of online dating for the first time in her life.

It was scary and overwhelming, and she kept attracting the same type of person she had just left behind. She put in a lot of work to figure out why the wrong guys gravitated to her — and went on more than 40 dates in the process. Her experience inspired her to write a book to share what she learned about attracting the right mate.

Christie Flynn understands the dating world because she immersed herself in it after ending a 26-year relationship.

Christie has had many different careers over the years but has worked primarily in the health and wellness industry. For a time, she worked as a personal trainer and began hearing a lot about her clients’ relationships, she said.

It was while she was training clients struggling in relationships — and going through her own trials and tribulations — that Christie decided to start a relationship coaching business. Her goal was to help people find the right match to improve their lives.

Christie is especially passionate about helping people in their 40s since that’s a common time period for big breakups and divorces. She works primarily with clients ages 25 to 55, and most are women.

In addition to coaching, Christie is also a psychic medium, and she uses her abilities to read energy and allow clients to communicate with loved ones to bring more depth to her coaching sessions.

“As a psychic medium, I can see things that people want to hold back, that they don’t want to show,” Christie said.

After diving headfirst into the world of online dating, Christie learned much about what to do — and what not to do — to find your ideal match. Her experience was so vast that she decided to turn it into a book called “How to Date a Guy and Get it Right.”

Christie wrote a self-help book about her dating experiences.

“I wrote a book all about my dating experiences and identified all the red flags,” she said. “After more than 40 dates, I had a good idea of what was out there.”

She walks readers through the process of gaining confidence and becoming a better, more authentic version of themselves. Part of that process is removing and repairing old patterns, letting go of the past, being clear about what you want.

The book spends time laying out proven strategies for women to attract the right type of man, and Christie includes advice on avoiding the pitfalls of online dating — from her personal experience.

Christie said many coaches use Emotional Freedom Technique, a self-administered therapy involving tapping on meridian points to release emotions. “The only thing I didn’t like about it is that if there’s an emotional component keeping someone stuck, it can take them right back to the event that triggered the emotion,” Christie said. “I found that people weren’t releasing the emotion through that process.”

Instead, Christie helps clients with a technique called Emotion Code.

“People are often holding onto baggage — emotions that are stuck within them. What I do is help them release those emotions, and they don’t come back again,” Christie said. “They get triggered within us from a very young age, and they can lead to many years in chronic pain, anxiety, stress, relationship blocks, business blocks, and money blocks. They can lead to bad habits and addiction. So when I help release those emotions, people don’t have those experiences anymore.”

“If you’re communicating with a digital person and you’re a feeling person, you’re going to use the wrong language and not make a connection. It’s a mismatch, and those in similar relationships must learn to better communicate with their partner.” — Christie Flynn, Psychic Medium and Communicator

“If you’re communicating with a digital person and you’re a feeling person, you’re going to use the wrong language and not make a connection,” Christie said. “It’s a mismatch, and those in similar relationships must learn to better communicate with their partner.”

She can help clients learn to communicate better in their relationships — even with family members and friends. Those skills can also assist when dealing with infidelity, or financial infidelity — when people hide financial issues from their partners.

After her mother died, Christie became aware of psychic abilities that allowed her to both read people’s energy and communicate with loved ones who had passed away. Over time, Christie realized she also had the ability to communicate with animals and people who are alive but nonverbal or debilitated. She has passed on messages from people who were unconscious or suffering from ALS.

Some clients hire Christie for readings in hopes of communicating with loved ones. But for those looking for relationship coaching, she also uses her psychic abilities to enhance her coaching work.

“When they’re saying their relationships are amazing, and I know the relationship isn’t amazing, I can maneuver in a way to shine a light on the areas they need to look at,” Christie said. “I add the extra component of being a medium to help guide people based on what is going on in their lives.”

In addition to one-on-one sessions, Christie also hosts weekly Facebook live events every Thursday at 8 p.m. EST. She uses them to pass on messages, which she says can either be for an individual watching or something that resonates with many people.

Christie also tours to hold these types of events in-person, and she’s looking to write a book about her experiences as a psychic medium.

Using her psychic abilities to help people has been incredibly gratifying and purposeful, for Christie, and she said she’s the happiest she’s ever been. She said she loves helping clients set boundaries and let go of toxic emotions, habits, and people, and she said it’s incredible to use her metaphysical abilities in that process.

When people lose a connection with a pet, it can also be traumatic and very emotional. She was invited to a cat show and was blown away by how much she was able to help pet owners.

“When people go through an experience related to grief, whether it’s a pet, friend, or a family member, it’s about connecting with people to reassure them,” Christie said. “Reassurance and connection ensure they know the person on the other side is OK and pain-free. That’s really gratifying.”

Through her personal and professional experience, Christie has developed an arsenal of online dating tips, which she readily shares with those she coaches. She often finds that daters misunderstand themselves and their dating profiles, and they often need professional help to improve them.

Flynn says it doesn’t matter what dating platform you use — they’re all essentially the same because “whatever energy a person is sending out, they’re going to get matched back,” she said. “You have to be really careful about what you want.” She cites the law of attraction, where you have a certain vibration, and if you keep attracting the type of person you don’t want, as she did, you have to clean up your energy and your self-talk.

“I created a list of the different aspects I wanted to have in a person with whom I wanted to share my life,” she said. “As soon as I did that, I got clear on what I wanted, and I attracted that exact guy. When you look at dating profiles, you’ve got to be careful about the pictures and language they’re using and what they’re trying to send out.” She said that if you can better communicate what you want and let go of your emotional baggage, it’s easier to attract the type of person you want in your life.

Christie has one final tip for finding the right match: Avoid people who are wearing sunglasses in their profile picture. “It’s a big red flag when I see people with sunglasses on. They’re hiding their eyes,” she said.