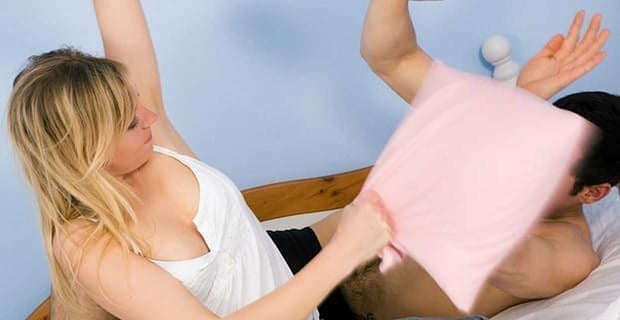 How to Not Smother Your Boyfriend

Pie is a wonderful thing. But there’s a point at which too much of a good thing, especially if it is cloyingly sweet and rich, will make us gag. It’s hard to imagine that even the thing men desire most — being near you — can also bring him to the point of revulsion.

It never has to come to that, as long as you understand the basic principles of common courtesy, common sense, trust and boundaries.

Don’t be his mommy.

A man needs a partner, not a mommy. Too many women, in an effort to demonstrate their affection, end up driving their men nuts with too much coddling and attention. Always remember that he is a grown man, and he can do some things without your help.

Laying out his underwear, socks, shirt and tie every morning might fly for a while, but it can get to be too much. If he chooses not to wear everything you picked out, it might be time to consider letting him dress himself.

And never set out his leisure time apparel. You might not be aware that those blue jeans you put on the bed for him are “cheap hotel” pants (no ballroom) and they still look brand new for a reason. Let him be comfortable on his day off, even if he looks a little raggedy to you.

And please don’t straighten his tie, primp his shirt and finger-comb his hair in front of other human beings.

One more thing: Don’t nag or preach to him. He’s going to drive carefully, he knows how much to drink and when to stop if he’s driving later, and he doesn’t need galoshes and long underwear. Sheesh!

You’re not his chief of staff.

A man needs to run his own social calendar. Don’t commit him to going to your third cousin’s wedding three hours away without running it by him first. He might have a spelunking adventure with the guys already planned.

And don’t screen his calls. He might have signed up online to get a call from the timeshare folks in Jackson Hole because he wants the free weekend stay to take you skiing, even though he will have to sit through a three-hour sales pitch when he gets there.

Or maybe he does want to meet Frank and Jeff for a beer even though it’s usually your night to watch “Survivor” together. Just let him live his own life.

sense and independence as a man.”

Take it easy with public displays of affection.

He loves your touch and your kiss. But his mom’s sofa, the restaurant booth or the office might not be the best places for your public displays of affection. What he loves in private might make him very uncomfortable in public.

It’s not at all a rejection of you if he squirms or grimaces. But there is a world of difference between him kissing you and you kissing him. And when he’s with friends, relatives, co-workers, or even strangers, he is not in a setting where kissing is part of his world.

Even too much private affection can get to a man. You may start to seem clingy to him. He needs to be an independent man, at least sometimes.

Snuggling when he’s trying to read his paper can make it hard to turn the page or impossible to concentrate, especially when you’re trying to talk to him at the same time.

And constant touching gets to be too much too, even after sex. Of course you deserve some cuddling and affection, but if he kisses you on the forehead, proclaims his love and rolls over, he might want to cool off and sleep.

Spooning him might not be the best thing right now. Men actually do have a biological reflex to sleep after sex, so on some occasions just let him sleep.

Give him a long leash.

A man needs some time for himself and some time with the guys. Don’t make him feel guilty if he wants to go out without you sometimes. It’s actually healthy for the relationship, and you should have plenty of time with the girls, too.

He’s got a cell phone in case of an emergency, but don’t text or call him all night long either. It makes you look needy and as if you don’t trust him.

If you’re the jealous type, just make sure your jealousy is never irrational. It’s not normal to have suspicions and fears just because he is not sitting next to you. He will sense this in you, and it will make your relationship feel like a trap or like a very small world that is closing in on him.

Just because your last boyfriend cheated on you that is no reason to assume this one will. The vast majority of men do not cheat.

According to US News & World Report, a 2000 research study found that only 11 percent of adults who were married or living with a partner have cheated, and that’s over an entire relationship. Only 3 or 4 percent cheated in any given year.

Be loving but be reasonable. Respect his space, abilities, common sense and independence as a man. Acknowledge reasonable boundaries and stop smothering your man.

Save your doting overattention for the babies you’ll have if you don’t scare your man away.

How to Bond with Your Boyfriend