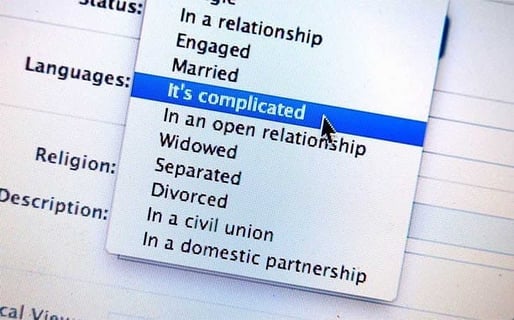 As of December 2011, Facebook had 845 million monthly active users with 483 million daily active users on average. That’s a lot of potential “friends.” But what happens when you meet a potential mate out in the real world? When do you know if it’s appropriate to make your relationship “Facebook official”?

Facebook offers nearly a dozen “relationship status” choices: single, in a relationship, engaged, married, it’s complicated, in an open relationship, widowed, separated, divorced, in a civil union and in a domestic partnership.

I currently have 525 Facebook friends. I thought it best to troll my friends list, see who’s currently “in a relationship” and send them messages to gather some intel. Many of the options are self-explanatory, especially married and divorced, but I’m curious about why we are all so concerned with each other’s relationship status.

“We dated for a month before

we were ‘in a relationship.’”

He hasn’t changed his status yet.

One friend in South Florida, Brooke, has been dating a fellow Facebook friend for about two months. When asked why she hadn’t changed her status to reflect this, she answers, “LOL! To be honest, I haven’t changed my status to ‘in a relationship’ because he hasn’t changed his.”

When it’s official in real life.

High school friend Sarah, an actress living in Austin, is “in a relationship.” I asked what her philosophy is behind “making it Facebook official.” She says, “In my own personal use of FB, I update my relationship status as it happens in real life. I have been in a relationship in the past and not changed my status. Although we were ‘boyfriend-girlfriend,’ it wasn’t serious enough, or I wasn’t sure of the long-term to change it on FB and ‘announce’ it to people.”

Emma, a 19-year-old waitress and student living in Portland, Maine, has been with her boyfriend, a.k.a. “in a relationship,” for eight months. “We made it Facebook official the day we made it actually official,” she remembers. “We dated for a month before we were ‘in a relationship,’ but when we officially were, we posted it on Facebook.”

After posting the same question on my Facebook page, I received nearly a dozen comments ranging from humorous to sensible, including, “I’d do it moments after your girlfriend/boyfriend asked why you hadn’t changed it yet,” and, “While my status represents the past, it has not been changed on FB for one simple reason. When your public status changes, you end up having to answer to it in public. It’s easier to just leave it!”

So knowing when a relationship is “Facebook official” is often based on knowing the relationship.

How to Use Social Media to Meet Men

How to Meet Quality Men Online

How to Choose an Online Dating Site