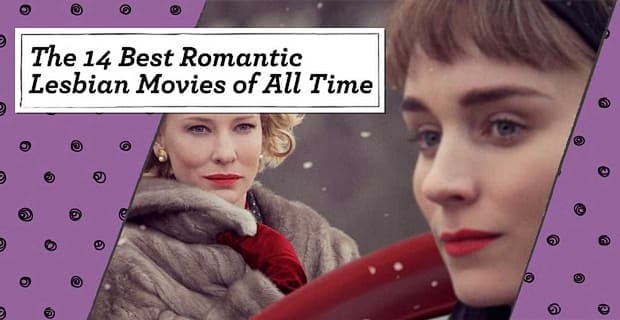 The 14 Best Romantic Lesbian Movies of All Time

If you’re trying to set the mood on a date with a special lady, watching a romantic flick together is a great choice. You can create intimacy with your partner by snuggling together under a blanket with a bowl of popcorn while the movie plays. But you’ve got to pick the right movie for your date night.

A straight-laced romance can kill the mood for lesbian couples because watching some guy standing in the rain spouting clichés isn’t exactly their cup of tea. No offense to Ryan Gosling. Fortunately, there are quite a few romantic comedies and dramas starring lesbian characters. We’re going to list 14 of our all-time favorite lesbian romantic movies for your enjoyment. Any one of these movies would be perfect for a date night at home with the woman of your dreams.

Starting our movie marathon is one of the most critically acclaimed lesbian movies of all time. “Blue is the Warmest Color” wowed audiences in 2013 with its subtle sensuality and heartbreaking story line. The French coming-of-age tale follows a teen who meets a blue-haired art student in a lesbian bar.

Adèle and Emma quickly fall for each other, and their relationship evolves as they become comfortable with their sexual identities and grow into strong, confident career women.

The story is based on a 2010 graphic novel by Julie Maroh. It’s about a romance that envelops and transforms two young women who are on the cusp of adulthood. “I have an infinite tenderness for you,” Emma says toward the end of the movie. “And I will my whole life.”

Fair warning, “Liz in September” is the kind of movie that’ll break your heart. Some women like that about it, though. This Venezuelan romance drama is about Eva, a young woman who lost her son to cancer and suspects her husband of cheating on her. Her car breaks down on the side of the road, and she ends up in a small town. That’s where she meets Liz.

Liz makes a bet with her friends that she can get Eva into her bed within three days. But the more the two women spend time together, the more their relationship becomes something more than a passing friendship. However, Liz has a secret that will forever change their lives.

With its suggestive title, “Better Than Chocolate” lets audiences know they’re in for a sexually charged adventure. Shot in Vancouver, this romantic comedy has become an LGBTQ classic because of its relatable characters and intriguing plot. The movie follows Maggie as she struggles to keep her lesbian affair a secret from her mother and brother, which becomes increasingly difficult once they move in with her.

“Better Than Chocolate” is rated R for strong sexual content, nudity, and language, so it basically hits the date night trifecta. From sexy shower scenes to sexy body painting scenes, this movie will have you and your date all hot and bothered in no time.

“Room in Rome” is dripping with sexual tension and romance. While staying at a hotel in Rome, two young women become closer physically and emotionally, but then they face the question about what happens once their romantic getaway is over. Is their tryst just a one-time thing, or does it mean something more?

Set in Sydney, “All About E” is a romantic movie about, you guessed it, E. She’s a Persian-Australian DJ who finds a bag of stolen cash, has to go on the run, and turns to an ex-girlfriend for help. E has to face her past and her family to make it through all right.

Full of sentimental flashbacks and chase scenes, this passionate and exciting movie is just pure fun. According to After Ellen, “All About E” is “the road movie you never knew you wanted.”

Set in the 1950s, “Carol” focuses on a forbidden attraction between two women. Carol, played by Cate Blanchett, will capture your heart with her beauty and style. She wins over an aspiring photographer named Therese within moments of meeting her, and their chemistry is positively electric throughout the film.

“Carol” premiered at the 2015 Cannes Film Festival where it received a 10-minute standing ovation. The movie went on to receive over 270 industry and critic nominations as well as 85+ awards and honors. According to The New York Times’ review of the movie, “‘Carol’ filters a relatively happy romance through layers of anxiety, dread, and psychological suspense.”

When you see Katherine Heigl starring in a movie called “Jenny’s Wedding,” you might assume it’s the typical shy-girl-meets-perfect-guy rom-com — but you’d be wrong. In this movie, Katherine plays Jenny, a closeted lesbian who has to come out to her family before marrying her long-time girlfriend.

The independent film didn’t make a big splash in the theaters, but it remains a date-night favorite for many couples because it’s so easy to relate to Jenny’s dilemma.

One of the characters sums up the movie’s theme when he says to Jenny, “Has it ever occurred to you that, if you spend your life lying to people about who you are, you never get to know who they are?”

I don’t know about you, but I’m a sucker for old lesbian couples. I see them together, and my heart just melts. “Cloudburst” is an absolutely adorable story about a lesbian couple on the run from a nursing home. It’s basically “Thelma and Louise,” but the women are in their 70s. And lesbians.

Stella and Dotty go on a road trip to get married and have some adventures along the way. “Cloudburst” was adapted from a stage play written by Thom Fitzgerald. It was well-received at film festivals in Canada and the US.

“It’s an epic tale of love and living life to the fullest,” said After Ellen. “‘Cloudburst’ is an acknowledgement of the lives of older lesbians, and just maybe allows us to glimpse into a future for ourselves full of love and laughter.”

In “Stud Life,” JJ must choose between her lover and her best friend. When the wedding photographer falls for a mysterious diva, her friendship with Seb, who’s also a wedding photographer, becomes strained. Set in urban London, the movie is a romantic drama where no one comes out of the closet and no one dies, which, let’s face it, is somewhat rare in the genre of LGBTQ films.

“This movie is a definite keeper,” said an Amazon customer in a review. “I have to tell more people about this! Great story, acting, and cinematography.”

This is an oldie but a goodie. Released during gay pride month in 1994, “Go Fish” is the oldest movie on our list, and, yeah, it may be a bit dated (not just because it’s in black and white), but it grossed $2.4 million at the time and proved lesbian movies could be financially successful. So give credit where credit is due.

“Go Fish” is about a lesbian student who hasn’t had sex in 10 months when a friend sets her up with a frumpy older woman. They don’t really hit it off right away, but there is a lingering connection. Their romance slowly unfolds over the course of the movie.

All in all, “Go Fish” is a fun film with spunky characters and a heartwarming message about looking past the superficial and giving love a chance.

This isn’t a story about falling in love — it’s a story about what happens after you fall out of love. Two actresses film a love scene together and start dating for five blissful months. Then they break up. Problem is, they have to go back to reshoot the love scene that started their romance. And it’s every bit as awkward and painful as you’d expect.

You probably shouldn’t watch this movie on a first date because it’s pretty sad and serious, but if you want to mix things up with your lover on a movie night, this is a good one to get lost in.

You know exactly what you’re in for when you start watching a movie called “The Incredibly True Adventure of Two Girls in Love.” It’s sweet. It’s romantic. It has a lot of kissing and hand holding. Randy and Evie come from different backgrounds — Evie is rich and popular, while Randy lives with her aunt who struggles to make ends meet — yet they find themselves drawn to each other despite their differences and the disapproval of their family and friends.

Randy and Evie are willing to risk everything to be together. And it’s really enjoyable to watch them fall in love.

Known as a “comedy of sexual disorientation,” the wacky 1999 movie “But I’m a Cheerleader” tells the story of a lesbian teen’s sexual awakening. Megan Bloomfield is a content high school cheerleader under the impression that she’s straight — until her parents send her to a therapy camp to cure her of lesbianism. Suddenly, Megan meets people who challenge her identity and push her to come into her own as she falls in love with Graham, a lesbian at the camp.

Though it tackles some weighty LGBTQ issues, the movie is a lighthearted romantic comedy about a girl becoming a woman.

No, this isn’t a dystopian series on Hulu. “The Handmaiden” is a South Korean film set in the 1930s. Lady Izumi Hideko hires a Korean woman name Sook-hee to be her handmaiden on her lush and secluded estate. What she doesn’t realize, though, is that Sook-hee is actually there to steal her inheritance. She’s a pickpocket on mission to help a con man seduce Lady Izumi. Yet it’s Sook-hee who ends up in the wealthy woman’s bed.

Netflix & Chill With the Most Romantic Lesbian Films Ever

Next time you’re planning a movie marathon with a date, consider adding these romantic lesbian films to your to-watch list. Whether you enjoy silly comedies or serious dramas, there’s something on this list for everyone. These movies highlight the diversity of experiences had by lesbians exploring their sexuality, forming deep connections, and falling in love in movies.

Let straight singles keep their Ryan Gosling movies. You can bond with your date and get in the mood for romance while watching attractive women flirt with one another in a lesbian chick flick. Enjoy!