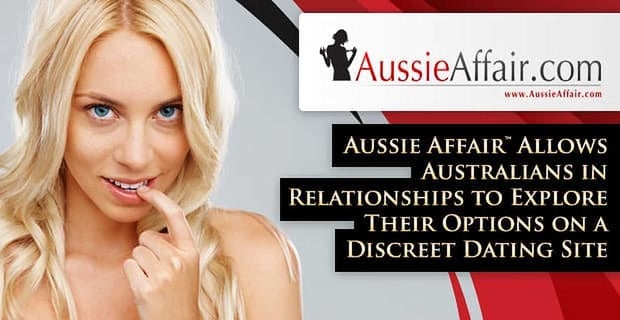 The Short Version: If you’re in a relationship, online dating can present many challenges. General dating sites often inadvertently foster dishonest dating profiles because they usually don’t offer options for relationship statuses other than “I’m single.” In 2002, David Rees started Married Affair, a UK-based online dating brand, to remove users in committed relationships from the general dating pool and provide them with a confidential environment to explore their options. Now Australians can arrange secret trysts on AussieAffair.com, a free dating site for married and unmarried men and women. It doesn’t cost anything to sign up, and the site’s ironclad safety features ensure you won’t be harassed by online scammers. Aussie Affair’s security team screens every new member and deletes profiles with false photos or spammy content. In the last year, the international dating network added over 100,000 real people to its membership, and the Aussie Affair team hopes to build on that growth by making its niche dating sites completely safe and easily accessible.

David Rees told us he never expected to work in the dating industry; he stumbled into it because he felt disturbed by the dishonesty of users on large-scale dating sites. Married individuals often lied about their relationship statuses on mainstream platforms because the only option was to say they were single. However, the assumption that everyone who wants to date online is single is unrealistic. Some people want to online date while in committed relationships, and they require a safe and confidential space to do so.

So, relying on his background in IT and marketing, David registered his first dating site MarriedAndLooking.co.uk in December 2002. Then he forgot about it and tackled other projects. Six months later, when he checked on the site’s progress, he was astounded to see that it already had a few thousands registrations, and he hadn’t even been marketing it yet.

That development spurred him to put all his energy into improving the website and growing the user base further. Over time, he created more niche dating sites and established the Married Affair brand in the UK. In 2010, he expanded his products into Australia. One of his first and most successful sites in the land down under was AussieAffair.com.

On AussieAffair.com, married and unmarried men and women can mingle in a private dating space.

Aussie Affair caters to Australians looking to explore the dating field and find someone willing to have an affair. Both short-term and long-term relationships have sprung from the members-only dating site. You can register for free by entering in your first name, gender, email, and day of birth. Only people with IP addresses in Australia can register for the site.

“Our mission is to bring people in relationships out of general dating sites,” David said, “and put everyone on a level playing field.”

Signing up to Aussie Affair takes about five minutes, depending upon how personalized you want to make your profile. You don’t have to complete a psychological profile to start browsing for a date on this site. You can stick with the basics and only fill in required information (including your marital status and age), or you can write a more descriptive introduction in your personal bio.

You must have a valid email address and Australian IP address to sign up to Aussie Affair.

“We encourage people to give more details and more photos,” David said. “That’s always going to be more successful.”

Aussie Affair’s straightforward interface helps users cut right to the chase and find a compatible date. The match algorithm will use your age range and interests to recommend matches, but you can also search on your own by filtering profiles by location, appearance, and other desirable personal attributes.

From start to finish, Aussie Affair makes the online dating process much easier to navigate. “We knew we couldn’t compete with some of the bigger sites in terms of reach,” David said, “but we could provide a less corporate service where our clients don’t have to pay as much.”

In fact, women don’t have to pay at all. Because Aussie Affair is a slightly more male-dominated environment, the team offers a free full membership to all women in Australia. Men must pay a low monthly fee to upgrade their memberships and send messages online.

Aussie Affair caters primarily to individuals who are married or in committed relationships, and a majority of members are middle-aged adults. According to the site’s internal data, about 30% of the membership base is between 36 and 45 years old. Maybe they’re having relationship problems, or maybe they want to remember what it felt like to be young and single.

Whatever motive leads someone to sign up, Aussie Affair provides a safe space to reevaluate their options and regain confidence. “We are seeing a slight change to our demographics,” David noted, “as people become more open to these kinds of arrangements. Now our site is seen as a more acceptable and less contentious service than it used to be.”

Thousands of people from Sydney to Perth have joined Aussie Affair in search of romance and excitement, and a lot goes into keeping those people safe from fraud, blackmail, and other criminal activity. For starters, Aussie Affair screens all new users’ IP addresses to ensure they are in Australia, and no dating profile goes live until a team member has personally reviewed it and determined it to be legitimate.

Backed by Online Dating Protector, Aussie Affair also automatically flags certain photos frequently used by online scammers and deletes profiles that use stock images. The safety of users on the site is of critical importance to the team, and they have layers of security in place to weed out the liars and fakes.

“The people on our site are real and looking to make real connections,” David asserted. “We always make sure scammers are dealt with right away.”

AussieAffair.com launched in 2010 to offer Australians a confidential and authentic place to seek an affair. So far, the site has attracted a lot of attention. In 2017, Married Affair added 100,000 registrations to its growing international network.

Of course, discretion is paramount on AussieAffair.com, so you won’t find any testimonials or success stories posted on the site. That doesn’t mean they don’t have them — David said he’s gotten numerous emails over the years from people who said the site helped them find love or reaffirm their commitment to their marriages. However, he’s sensitive to the privacy concerns of his members, so he will never publish their secret love stories.

“Everyone here knows what the site is and what the stakes are.” — David Rees, Founder of Aussie Affair

It hasn’t been easy to run an affair-oriented dating site and attract talented team members who understand and support Married Affair’s mission, but David said he’s very happy with what his small team has been able to accomplish over the past few decades.

“Thankfully, we ended up with the right staff members who are open and lighthearted,” he said. “We have a good team now, and we’re all focused on the same thing.”

David said his site actually contributes to less deception in the online dating world because it provides a judgment-free platform where daters can be honest about what they want and who they are. “It’s a level playing field,” he said. “Everyone here knows what the site is and what the stakes are.”

AussieAffair.com: Where You Can Be Honest About Who You Are

In late 2002, David realized many online daters, both single and attached, were struggling to get what they wanted on general dating sites. Married Affair’s niche environment gave people a safe and straightforward alternative where anyone can find romance without being dishonest in their dating profiles. Today, Aussie Affair provides an open and flirtatious community for Australians interested in a discreet affair.

Married Affair runs dozens of dating websites in the UK, Australia, New Zealand and South Africa — and the team is looking to expand into non-English-speaking countries, including India and Japan. David said he also has his eye on the US dating market. In the coming years, he plans to grow an international base of online daters by creating more niche brands for seniors, single parents, and other types of people.

David told us he believes dating should be fun and stress-free, and so he continually develops tools to make it easier to meet people who want similar things in life. “We’ve been in this market for about 15 years now, so we know a bit about how it works,” he said with a laugh. “We’re very happy with the business, and we’re looking forward to rolling it out further.”