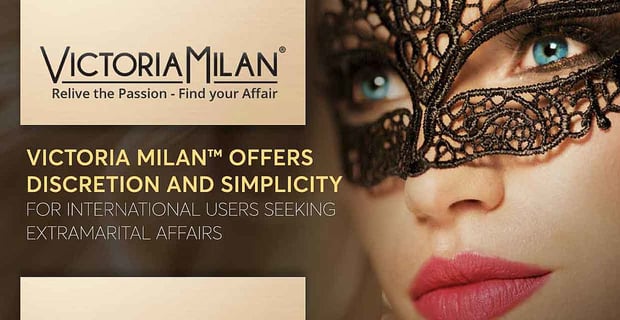 The Short Version: Every cheating spouse seeks an extramarital affair for a different reason. While some may be dissatisfied with their partners, others date outside of their primary relationships specifically to preserve those unions. Whatever the reason for seeking out additional partners or relationships, Victoria Milan provides a secure platform for finding and chatting with potential romantic connections. The site is one of the most popular in Europe and continues to add more user-friendly features to cater to the needs of men and women in 33 countries around the world.

Marriage is different for everyone — and the reasons for seeking companionship outside of a marriage also vary.

Some spouses agree to an open marriage from the start, a more popular choice among younger generations. This allows one or both partners to find a connection and relationship outside of the one they have together.

Other spouses may be fighting a long-term illness, so they allow their significant other to relieve stress and loneliness through an extramarital affair. And still others find out that somewhere along their journey the spark between them has faded. While they may want to seek passion outside of their union, they also want to stay married because they appreciate the shared history and life experiences they have together.

Victoria Milan is available for free online and through a mobile app.

“It’s easier to say people cheat because they want to and cannot be faithful to their partners,” said Sigurd Vedal, CEO of Victoria Milan, one of the most popular dating sites for married and attached people seeking affairs. “But truth be told we see and hear so many other stories all the time.”

Victoria Milan is on a mission to change the narrative about extramarital affairs by highlighting the different reasons some choose to go outside their primary relationship.

In fact, many Victoria Milan users say the extramarital affairs they’ve found through the site make them happier in their long-term partnerships than they would otherwise be. In a survey of almost 10,000 Victoria Milan members, 71% of cheating parents noted that the affairs they were participating in helped them stay married.

“We believe that an online dating platform like Victoria Milan provides a service that many need,” Sigurd notes. “It helps a great deal of people to keep their marriages alive.”

Expanding to New Countries to Serve a Global Audience

What’s lacking in many long-term partnerships is the element of surprise. Victoria Milan caters to men and women who may be seeking something different in an extramarital affair. That’s why the platform helps users around the world build connections within their home countries as well as internationally.

Already the fastest-growing platform for married or partnered users seeking affairs in Europe, Victoria Milan wants to continue to expand its global reach. The company has more than 6.5 million members around the world, most of whom live in Europe. The countries with the greatest number of users are Norway, Sweden, Finland, Denmark, France, and Belgium, although the platform also has a significant number of members from the Netherlands, the UK, and Spain.

Sigurd Vedal is CEO of Victoria Milan, a popular website for those seeking extramarital affairs.

While the site is especially popular in Europe, it does have users in other regions. Victoria Milan has an established presence in 33 countries and is available in 30 languages. But Sigurd said the company is looking to develop a presence in several new markets, including in India and throughout Asia.

“Each nationality is different but, in general, users of Victoria Milan are quite similar in what they seek in extramarital affairs and how, so we think globally and adapt locally,” he said.

Like its users, the company that operates Victoria Milan has an equally global focus. With a goal of facilitating international connections, the company moved its headquarters from Norway to Malta. By 2015, it was so successful that it opened a new office in Budapest. By the end of 2018, Digisec, the parent company of Victoria Milan, projects it will need to relocate to another new office.

The Victoria Milan platform was specifically designed with straightforward features to help users interact on the site and the app.

“We want our members to find an outstanding user experience and the best service focused on their interest, both on our site and app,” said Sigurd.

Another key component to the success of the platform is its security. Victoria Milan is dedicated to ensuring the extramarital affairs originated on its site remain private. This process begins when users first start interacting on Victoria Milan. When a user signs up for an account, staff members monitor screen names to ensure they don’t give away any identifying information.

The AnonymousBlur™ tool lets users blur their faces in a photograph before uploading it, and the Public/Private toggle feature lets users hide their pictures until they trust other users enough to share the images with them.

Victoria Milan suggests using the AnonymousBlur™ tool to ensure your face remains unrecognizable in photos on the site.

Victoria Milan has become a popular platform, too, because it gives users robust features to find and communicate with one another. As in other dating platforms, users search for one another by setting limits based on parameters like physical location and appearance. Search features include city, country, age, weight, and body type, but users have other search options, including turn-ons, personality, and interests, to help them meet like-minded folks.

“Our professional development team is continuously working on new, fun and useful features to help one find one’s affair more effectively,” Sigurd adds. “Several new features are on there way as we speak!”

When members find users with whom they want to interact, they can communicate using winks or private messages. And, for those interested in anonymity, you can chat with potential significant others through anonymous texting.

Another popular and much-appreciated feature is the panic button, which allows users to quickly shift away from Victoria Milan to an innocent website if a spouse comes to snoop.

Though the company has expanded considerably in the last few years, it isn’t yet finished making improvements to Victoria Milan or its other romance-oriented brands, like NextLove and RichMeetBeautiful.

“Our goals are to be the world’s most customer-oriented company in the dating industry and to offer niche online dating sites that provide our members a unique experience,” Sigurd said.

Victoria Milan employs more than 80 people who not only listen to customers’ interests to develop new brands and features but also to help resolve issues quickly and efficiently. If users experience any problems, they can communicate with Victoria Milan using a simple feedback form or by searching through a list of common missteps on the site’s FAQ page.

The process for getting started on VictoriaMilan.com is quick and easy, and if you get stuck, the customer service team stands ready to help.

“We have a high level of trust within our company culture, and everyone knows how they contribute to the overall success of the organization,” Sigurd said.

Trust is precisely what makes the difference for many Victoria Milan users, who, above all, value their privacy. Ultimately, Victoria Milan fills a need for users who are, for whatever reason, seeking sexual relations or companionship outside their marriage.

Whether you only wish to carry on a virtual affair with an online partner you have no intention of meeting or you’re willing to travel across the continent to find someone with whom you’ve been chatting, Victoria Milan helps facilitate these experiences.

“We believe that niche online dating platforms are the best way today to connect and establish relationships with like-minded people,” Sigurd said.