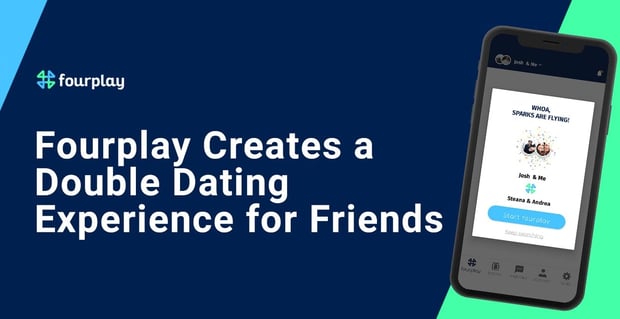 The Fourplay App Creates a Double Dating Experience for Friends

The Short Version: Dating can come with a lot of nerves. It can be worrisome trying to figure out the do’s and don’ts of dating. That’s why having a trustworthy friend in your corner will help you on your dating journey. The dating app Fourplay is on a mission to change how singles date and has created a double dating experience for friends who don’t want to swipe on matches alone. On Fourplay, singles get access to a fun environment where dating is less awkward and intimidating.

I always enjoyed double dating with my friends and their potential lovers. It allowed me to be more comfortable with first dates and reassured me that I wasn’t alone. If things took an unexpected turn, I would simply give my friend the eye and we would scurry on out. Whether it was a bad date or a great one, we would always leave laughing at the end, knowing we were experiencing dating together.

The app Fourplay has launched a double dating experience that allows members to team up with their friends to conquer romance together. Singles who use Fourplay spend time finding their perfect match with assistance from their friends, and they can group chat with app members they meet online.

Co-Founders and best friends, Julie Griggs and Danielle Dietzek created Fourplay based on their experience with dating. In 2019 the two were living together, and Julie was completing her master’s degree to become a physician assistant. Julie expressed to Danielle her desire to date while still managing a busy schedule.

To help her friend out, Danielle decided to change her dating app profile picture to a picture of the two of them with a caption saying, “Swipe right if you and your awesome friend want to double date me and my awesome friend.” Danielle told us that doing this helped keep Julie in the dating loop and allowed the friends more time to spend with one another.

“When the messages started flying in from guys telling us how amazing our idea was and that we should make it into an app we realized we had something special and something that singles want. So we went for it and launched our business!” exclaimed Danielle.

A Social Network for Single Friends to Date Together

Julie told us that when she and Danielle  first launched Fourplay it was live in every city to see who gravitated to the app. After conducting research, they discovered that 98% of users were between the ages of 22 to 34 years old, and the majority of them were in New York City.

As a result, Fourplay shifted its main focus to that initial target audience. Singles can download the app from the Apple App Store.

The teamwork comes into play and makes the dream work after downloading and creating an account. Singles can share links with their friends to build teams that will eventually form into what is known as a Fourplay chat. The group chat includes your teammates and other Fourplay members.

Fourplay’s founders believe that friends don’t let friends date solo. Danielle informed us that singles can only experience Fourplay if they’re on a team. Solo dolo is not a thing on the app. From the beginning, users are asked to team up with a friend. Singles can invite their friends to join their swiping journey, so members never have to feel like they’re alone.

“My teammate and I had such a good time on the date. It was awesome to just meet two new people and talk and drink and have some fun together!” said a Fourplay user in a review.

Coming up with cool icebreakers to get to know someone on a date can sometimes be challenging. It’s only so many 21-question games you can ask before things get redundant and boring. Members of Fourplay don’t have to worry about what to say when it comes to dating online. By interacting with a group of people, no one is put in the spotlight. Everyone has a fair share to converse with other members in fun group chats.

But how does it work? Matches are created once four singles each give the thumbs up on their device. After a match is created, team members form group chats to flirt and chat it up. Group chats on Fourplay are designed to help eliminate the awkward one-on-one conversations that daters typically have. Singles can talk and plan their double dates in a friendly environment.

Single friends praise the Fourplay team for creating such a fun and interesting app for everyone. Finding a true connection on the Fourplay app is a simple matter of strategizing with friends and swiping through teams. Julie and Danielle said that the positive feedback they receive encourages them to keep going.

“Excited to have finally found a way to set up group dates! Solo dating apps can be exhausting to keep up with so having double the woman-power with a friend is helpful,” exclaimed Katie Hurley, a Fourplay member in a review. “I love the chat feature too. It eliminates the need to communicate outside the app and the pain of having to send screenshots.”

After bootstrapping for about three years, Danielle told us that Fourplay has raised funds to expand to at least two new cities in the future. Some members loved the app so much that they became investors in the angel round.

Fourplay: Where Teamwork Makes the Dreamwork

The Fourplay team believes that teamwork is the true key to dating success. Members have access to unlimited teams and can invite as many people as they want to join. If needed, members can switch, delete, and edit their teams at any time. This allows singles to feel more comfortable knowing that they’re ultimately in control of their time on the app.

Although the app revolves around teamwork, the Fourplay team understands that in the end everyone is encountering individual dating experiences. The team uses a unique code to verify the identity of each member who joins to make sure people are who they claim to be and to ensure that members feel completely safe.

Members are also allowed to block and report members who are not abiding by the community rules of the app. The cold shoulder feature allows members to decide who gets to see their profile on the app. Certain people – such as an old ex or a rude contact – can easily be blocked from seeing your profile even before they become members of the app themselves.

“A lot of our users tell us that they like Fourplay because it’s a lot less pressure. They feel more comfortable being with a friend who can contribute to the conversation. Most importantly, going with a friend is a much safer way for singles to meet up for the first time. The buddy system is tried and true!” said Julie.

Fourplay plans to expand in New York, Los Angeles, and Chicago by the end of the year 2022. Danielle told us there is even a big demand for Fourplay in London so she hopes to go international in the near future as well. Single people who are outside of New York can join the Fourplay waitlist to find out when it launches in their area.

Ashayla Blakely is an experienced storyteller and writer who has fun writing authentic and relatable content for DatingAdvice.com. As a hopeless romantic, Ashayla has always enjoyed sharing good conversation and advice about dating. She graduated with a Bachelor's degree in Telecommunications from the University of Florida. You can often catch her with a script in her hand, calling out the shots in her many directorial roles on set.