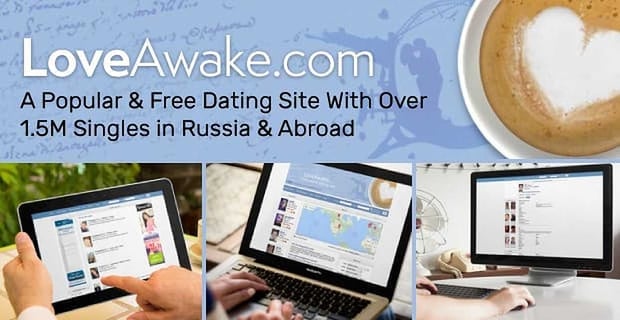 LoveAwake.com: A Popular & Free Dating Site With Over 1.5M Singles in Russia & Abroad

The Short Version: Since 2008, LoveAwake.com has given millions of singles worldwide the opportunity to fall for someone special online. The dating site is free to join and offers unlimited access to chat rooms, private messaging, and advanced search functions. Additionally, a state-of-the-art algorithm vets every new member and automatically flags fake profiles before they can ever appear on the site. As a result, the 1.5 million members on Love Awake are all active and authentic singles interested in love and marriage. If you have an international outlook and a romantic heart, Love Awake could be the perfect place to start your journey to that perfect match.

A few years ago, a well-educated and successful American businessman named John lost his wife, whom he dearly loved. He didn’t want to spend his golden years on his own, so he sought the services of a global dating agency and website, LoveAwake.com, for help finding love again.

Through the agency, he met Luisa, a down-to-earth Spanish woman. From the moment he saw her photo, he felt captivated by her, and he knew he had to meet her despite the geographic distance between them. John and Luisa clicked on their first date, and they are now married and living together in the States. John told LoveAwake’s team in his thank-you letter that Luisa reminds him a lot of his first wife, and he foresees many happy years with her.

Russian entrepreneur and Love Awake Founder Slava said he loves hearing from couples like John and Luisa. “Personally, I find it to be most rewarding,” he said, “to hear the instances when people in the autumn years of their lives find new love through our site.”

Slava started his first dating agency in Russia in 1995. Although he grew the business into one of the most recognizable names in the dating industry in a few years, he lost controlling interest in the company to an American partner.

“At that time, I was a novice businessman,” he explained, “and totally inexperienced in legal and contractual matters. As a result, I signed a poorly drafted partnership agreement that, to my complete shock, allowed my American partner to sell the agency in 2008.”

Not only did Slava have no say in the sale, he didn’t receive a single cent to compensate him for the years of blood, sweat, and tears he put into the business. “That was one big crash for me,” he told us, “but I didn’t burn. Instead, I launched a new agency.”

LoveAwake.com is a fast-growing dating and matchmaking site designed by Slava. You can join for free by inputting your location, date of birth, user name, and email address. Then you can search for potential matches by a variety of key facets, including appearance, marital status, and religion. You can send a message to anyone who catches your eye, and you won’t be alone — in total, over 14 million messages have already been sent on the site.

Over the past few years, Love Awake has become a widely popular network supporting millions of singles all over the world. “Now I am back at the helm,” Slava said, “with a crew of three helping me with all aspects of maintaining and running this cruise liner of a site with more than 1.5 million passengers on board.”

One of the most pervasive problems in online dating is the prevalence of fake dating profiles. When scammers falsify information on a dating site, everyone loses. Online daters could lose their money dealing with fakes, and dating companies could lose their good reputation. Slava said he takes this problem seriously and works hard to keep Love Awake a safe and honest place to search for love.

“We try our best to identify and delete fake profiles,” he said. “Our screening algorithms approve on average just one profile out of every four submitted.”

Love Awake members can also flag profiles they believe are fake. The site’s team receives an average of 50 reports a day. They review each report individually and will remove a profile from the website if it is suspicious or offensive. “Defending our users against fraud is a battle that will never stop,” Slava said, “and we are very grateful when they pitch in by reporting suspicious users.”

Love Awake’s Pinterest page helps raise people’s awareness by sharing online dating statistics and giving safety tips. Every day, the team uploads examples of fake profile pictures used by scammers on the web. From women in crop-tops to men in camo, the photos show daters how easy it is to be fooled by a stranger’s smile.

Slava told us that one of the most frequently used categories of fake profiles is an American military man. “For some reason, scammers seem to believe that American GIs are it, the most trustworthy and desirable type of man of all,” he said.

Love Awake began in Russia, built by a Russian entrepreneur, so it’s no wonder that a substantial number of its users are Russian as well. Singles from across the former Soviet Union have joined the free network. However, the membership does have a foothold worldwide with a good number of members from the UK, Australia, Canada, South Africa, and India.

Slava said the team is looking to continue the site’s expansion into Eastern Europe, and they’re making gains in the United States by acquiring dating sites based in the US. “That should bring to us more people from the English-speaking countries,” he explained, “and level out our demographics, eventually.”

You can search for potential matches by country of origin to locate a date in your area. You can also browse by age bracket or recent activity and narrow your dating pool by appearance, username, and other personality traits.

Slava told us he used to feel skeptical about personal ads and introduction agencies until his own agency proved it can work. He’s now a firm believer in the effectiveness of online singles networks like Love Awake.

He said, “Statistically, any well-structured profiling system or search engine will give a user a much better chance of choosing the right partner than the usually insufficient number of sporadic and isolated encounters that real life affords us.”

On Love Awake’s global platform, members often cross oceans to be together — and Slava said that speaks to the power of their bond and the precision of the site’s matching tools. As long as a single person knows what type of partner he or she wants, Slava believes a well-populated dating site can dramatically shorten the search for that ideal match. He can only caution members to choose wisely when online.

“Our world isn’t made up of men and women,” he said. “It is made up of two basic types of people: those who love and give and those who take and take.”

What makes his work on the site worthwhile, Slava told us, is seeing relationships blossom as a direct result of Love Awake’s platform. While he doesn’t know exactly how many couples have met thanks to his website, he knows it has happened many times over the years. Some former members send in pictures of their weddings or their children, and that’s always a source of inspiration for the Love Awake team.

“Apart from any financial reward, every job should bring one a degree of moral satisfaction,” he said. “Who wants to engage in inconsequential toil?”

“I do get special bonuses every now and then when, out of the blue, I hear from somebody whom I helped find love.” — Slava, Founder of Love Awake

Slava respects the privacy of his members, and so the site doesn’t publish any love stories or testimonials from couples who have met via Love Awake.

“There have been many happy romance stories in my years in this business — too many to remember them all, actually,” he said. “That is something that makes my work very special.”

Love Awake Continues to Thrive in a Competitive Dating Market

When Slava started his first dating agency in 1995, the online dating industry was practically nonexistent. Match.com was only in its first year. The term smartphone had barely entered our vernacular, and it’d be decades before dating apps would take over singles’ lives.

“Technically, it was practically a clean slate back then,” he commented. “Today there seems to be hardly any space left on its margins.”

Love Awake has had to adjust and adapt over the years to stay relevant in a fast-moving dating industry. Its strong membership base of 1.5 million singles speaks to the success of its methods. Whether the team is screening dating profiles or developing new search functions, their focus is on growing to suit people’s needs and satisfy their desires. From new signup to first message, Love Awake gives singles the world over the opportunity to meet, chat, and fall in love.

“To stand out in 2018 is going to be no easy task for LoveAwake.com,” Slava said, “but I do believe that some ideas that we plan to realize this year shall make our site more attractive to people who look for trustworthy and user-friendly online dating solutions.”