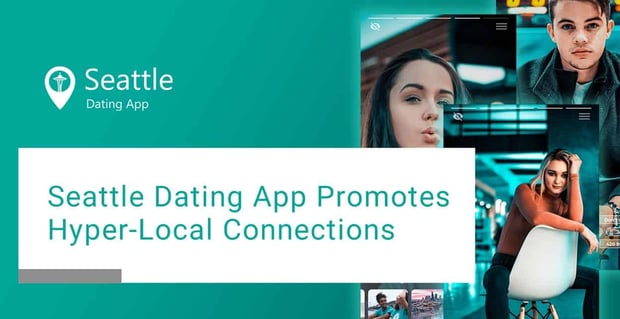 The Short Version: Each city has its own dating culture and expectations, yet so many apps take a one-swipe-fits-all approach to matchmaking. Seattle Dating App was launched to provide neighborhood-based matches and to address local dating challenges in practical and realistic ways. Basically, it’s a dating app made by locals for locals. Seattle Dating App has been downloaded thousands of times, and it has rapidly become a local legend in the Seattle dating scene.

Seattle Dating App launched in September 2019 to improve the city’s dating landscape and reputation. It garnered public attention with its quality-driven approach to online dating, but it really took off once the COVID-19 pandemic hit the area in early 2020.

Seattle Dating App is free and connects singles who live in the same parts of the city.

The app was originally designed to facilitate in-person dates, but the team quickly revamped to roll out virtual dating features, which were embraced by the local community. Seattle Dating App saw over 5,000 users take the Safer Dating Pledge and commit to refraining from meeting an online date in person until it was safe to do so.

Seattle Dating App was created by a Seattleite named Ben Mussi, who wanted to improve the local dating experience and give singles the resources they need to make a smart match. That has become particularly critical for singles navigating social distancing and lockdowns.

“Singles have become much more intentional about dating during COVID,” Ben said. “And people from around the United States have written to us requesting a hyper-local dating app for their own cities.

To meet local demand, Ben has rolled out Portland Dating App, which takes the proven features of Seattle Dating App to another local community.

Throughout the pandemic, single professionals have turned to these two quality-driven and hyper-local dating apps in droves. Together, these platforms have seen over 60,000 downloads and created approximately 20,000 matches in the Pacific Northwest in just the last year.

Seattle Dating App has always had an undeniable local appeal. Within its first six months, the app recorded over 1.5 million swipes and hosted over 75,000 chats. But online activity surged even higher when Seattle singles faced the uncertainty and isolation during the COVID-19 pandemic.

Activity on the Seattle and Portland apps increased by 50% in March. Mentions of video chat tools on dating profiles also rose significantly on the app.

“People didn’t know how long COVID would last.” Ben explained. “Many people thought that COVID might just be the equivalent of a Pacific Northwest snowstorm where we stay at home for a week or two.”

However, over the next few months, reality set in that the new normal would be around for a while. That realization seems to have sparked a change in behavior on Seattle Dating App. Most men now swipe and message less frequently on the app, while most women swipe and message more frequently.

“I theorize that men were more motivated to meet their matches in person, while women were more focused on virtual socialization,” Ben said.

After the initial spike in March 2020, user engagement decreased steadily until the middle of July when lockdowns started to ease and summer weather tempted singles to leave their homes for some outdoor social distancing fun.

Seattle Dating App provided support for its users through these highs and lows by introducing a host of new features that focus on building new connections and lowering the barriers of communication.

The app released an Introduction Button feature to allow online daters to chat before forming a mutual match. In the last year, more than 35,000 users have met using this feature.

To combat isolation, Seattle Dating App has also hosted virtual singles events during which singles can gather to chat. The events offer a casual atmosphere for hanging out with peers.

In some ways, the Seattle Dating App’s hyper-local focus made it easier for it to adapt and serve the niche interests of its users. Singles living in the Seattle metro area faced the same local ordinances, COVID-19 trends, and political climate, so they remained largely on the same page about what types of dating experiences were possible and when.

Over the last year, Seattle Dating App has facilitated meetups at public parks, hiking trails, and other outdoor spaces.

Creating a Safe and Authentic Space for Singles

The biggest upside of joining a hyper-local dating platform like Seattle Dating App is that singles don’t have to go very far to make a match. The app matches its users according to neighborhood and provides greater convenience for people with busy schedules or limited transportation.

Seattle Dating App doesn’t just throw all city dwellers in a big pot and see what happens. It separates the city into regions and neighborhoods to ensure that matches are realistic and make sense. That means no more traveling across town to meet a potential partner.

Another key feature on Seattle Dating App is its ability to match couples based on their date availability. The app lets singles share their schedule and identify where their free time overlaps. For instance, maybe two people work on the weekends but have Wednesday nights off. The app can find out that information and include it in the compatibility matching.

Seattle Dating App takes seriously its promise to match local singles. Its goal is to add value to the online dating scene, and it is constantly expanding in accordance with user feedback and dating trends.

When the app first launched, it had an issue with scammers and out-of-towners trolling for attention, so Ben and his team quickly figured out security solutions to keep nonlocals out of the mix.

The app now has the ability to automatically detect and ban fake profiles and new users from outside the local service area. Since this update, Seattle Dating App has seen zero complaints about catfishing, scamming, and other types of online dating fraud.

“We’re not sure if any other app has the same ability to automatically ban and delete nonlocals since they are all apps designed and marketed on a national or international level,” Ben noted. “Many apps let those fakes and scammers exist on their apps to bump their numbers and get unsuspecting users to pay for upgrades.”

Seattle Dating App has recently partnered with dating coach Shantelle Canzanese to further guide singles through the hurdles of love. The app offers free one-on-one consultations for subscribers. Shantelle can offer advice on everything from what to say in a dating profile to how to act on a first or second date.

The COVID-19 pandemic has ushered in a new era of online dating, and local dating is at its very center. Singles are less willing to travel to meet a date, and Seattle Dating App has met Seattle singles where they are and created a lot of robust matches that way.

Seattle Dating App prioritizes real-world dating, and its matchmaking tools have adapted to help locals meet one another no matter what’s going on in the world. Singles on the app tend to take each other seriously. They’re looking for more than just a swiping affair or long-distance chat.

In fact, we’ve seen evidence that many online daters are tired of hookup culture and casual dating. According to a recent report, 53% of dating app users say they’re now ready for a serious relationship.

Perhaps this preference has something to do with the pandemic. Perhaps time in isolation has given modern singles a greater appreciation for the value of close, committed partnerships. Seattle Dating App aims to be a leader in this trend by helping locals stay within their comfort zone (and their ZIP code) as they pursue romantic relationships in the Pacific Northwest.