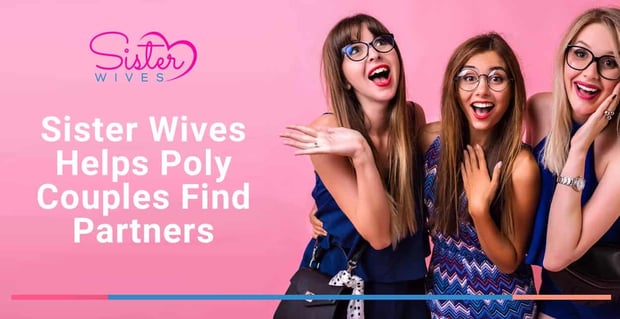 The Short Version: Polygamous and polyamorous couples interested in adding more partners to their relationships often have trouble finding them. Sister Wives set out to solve that dilemma with its dating platform that helps couples find others who are seeking a poly situation. The site can help singles interested in poly relationships find couples who want to welcome them. Today, more than 13 years after its launch, Sister Wives is one of the only dating sites for poly singles and couples.

A woman named Tracy shared her struggles with raising two children alone on an episode of “This is Life with Lisa Ling.” She felt overwhelmed and had no one to rely on until she met a man named Gary online.

Tracy and Gary meeting online may sound ordinary in the world of online dating, but there was one significant difference. Gary already had a wife and was seeking another partner, and the pair met on Sister Wives, a dating platform for polygamous and polyamorous people.

Gary and Tracy are part of a growing segment of people in the United States who seek poly relationships.

Sister Wives launched in 2008 to support the polygamist community. Founders Christopher and Robyn Alesich also expanded the website to attract more polyamorous couples, singles, and others.

“We started it because we had a lot of friends who were polygamists. I think it’s the only polygamy dating site, but it is appealing to polyamorous customers, too,” Christopher told us.

A polygamous arrangement, where someone seeks to marry more than one spouse, is traditional in some religions. Three, or more, partners often live in a shared space and raise children together. Sister wives are two or more women married to the same man who have no romantic connection with each other. The platform is named after that arrangement.

A polyamorous union, on the other hand, is more common and has more configurations. For instance, a polyamorous triad could have two men and one woman, two women and one man, or three people of the same gender who are in love with each other. They may or may not live together, and two of the three may or may not be legally wed.

Sister Wives is one of the only dating platforms where singles and couples can find the type of polygamous or polyamorous relationship they desire.

Polygamist Couples Add to Their Partnerships

In a survey of more than 5,000 people, 7% reported they were polyamorous, with another 7% responding that they used to be polyamorous. A little more than 25% of respondents noted that they were not polyamorous but were intrigued by the possibility.

Though polygamy often brings to mind conservative relationships, Sister Wives is much more modern, welcoming all users, including same-gender relationships. The only caveat is that members should be looking for serious, committed partners, not short-term or temporary hookups.

The most common demographic the website serves are men and women in their mid-30s to early 40s. And most of the platform’s users are not from Utah — where polygamy is a common practice — but are spread throughout the country, including the East Coast, Arizona, and Florida.

According to Christopher, almost half of the website’s users are looking to create a triad by adding another member to an already-existing couple (typically male-female) with one bisexual partner. Another 20% are searching for a traditional polygamous relationship, with two women seeking a romantic relationship with the same man.

“Some of them are polyamorous couples, with a bisexual wife looking for a closed triad. Others are polygamists, or sister wives who are friends with each other, but their relationship is just for the man,” Christopher told us.

Sister Wives has a robust vetting and moderation process because it is a progressive platform that serves a wide range of polygamous and polyamorous singles.

Robyn said that she checks every couple and single when they sign up to ensure they are authentic and genuine.

“I go through and check the site for approvals. Everyone who signs up is vetted. We make sure IPs are matching up, and that helps us make sure that no one is fake,” Robyn said.

The Sister Wives team also has engaged users who help with moderation. They often reach out to the single women on the site to ensure they aren’t being harassed.

Those single women are also the only members on the site who receive free access. Couples, groups, and men pay subscription fees to access the platform’s premium features, including messaging, search options, video chat.

“We’ve noticed that other platforms were full of fake people and had no customer service,” Christopher said.

To fulfill that mission, Sister Wives promises users that if they haven’t made a match in six months or a year, the platform will offer extra months of membership for free.

“If they’re not happy, and they message us, we try to fix that. We want our customers to be happy,” Robyn told us.

Sister Wives Supports the Poly Community in Many Ways

The Sister Wives team is proud to create a community for polygamous and polyamorous singles and couples. The platform is also committed to advancing polygamous marriages in the United States.

Until polygamous and polyamorous couples can legally get married, the platform offers a place where non-monogamous people can find a compassionate community. The team wants to help more polyamorous people meet each other and feel at home.

According to the Sister Wives platform: “While we are optimistic that polygamy will one day be legalized. It is important to know that you can still have a happy, fulfilling polygamist relationship where you think of each other as spouses and live together, even if you aren’t legally married.”

Christopher said that he wants to offer more free functionalities that everyone can use without paying for subscription services. Making that happen is still in the works because the company doesn’t want to turn to ads to make a profit.

Whatever happens next for Sister Wives, the team is committed to making the site useful to as many people as possible.

“We want to turn our site into a hub for polygamous and polyamorous people. Our goal has always been to grow our community,” Christopher told us.