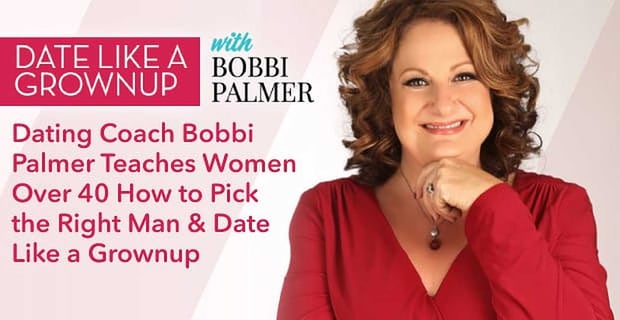 The Short Version: If you’re over 40 and sick of being single, you can gain instrumental dating knowledge by turning to the resources at Date Like a Grownup with Bobbi Palmer. Bobbi’s six-step coaching system helps hundreds of women find a loving, forever, grownup relationship. In one-on-one private coaching sessions, group virtual workshops, independent programs, and free webcasts, the dating coach maintains that it’s never too late to meet someone and fall in love. Her compassionate support and experienced advice empowers women to attract the right man, own their dating mistakes, and date like a grownup. With a positive frame of mind, Bobbi works closely with mature women to help them improve their dating habits and strategies so they can easily attract long-term love.

Single her early 40s, Bobbi Palmer had tried just about everything to get to a second date. She’d gone to speed dating events, tried video dating, joined dating websites, put out newspaper ads — anything she could think of to meet someone. None of it was working for her. Finally, she had to admit to herself that she was the problem.

“I realized I must be doing something wrong,” she said. “I thought it must be me because the only thing consistent was me. So I had to figure out what I could do to get help and get out of my own way.”

Bobbi Palmer, of Date Like a Grownup, has established an international reputation as the dating expert for women over 40.

Over the course of a few years, Bobbi studied, went to seminars, and invested in counseling; all of which helped change her approach to herself, dating, and relationships. She grew to understand that she was enough just the way she was. She was no longer dealing with boys — she happily was dealing with men. These grownup men appreciate smart, independent, loving women like her.

When she met a Mid-Western pig farmer on Match, he wasn’t what she had expected, but he was perfect for her. They got married within six months. Single women who heard her story said it gave them hope for their own love lives, and Bobbi felt drawn to help them.

“I decided to start teaching women to do what I did,” the dating coach told us. She called her business Date Like a Grownup because her coaching caters to single women over 40.

Today, her in-depth coaching programs and uplifting webcasts help women stop sabotaging themselves, pick the right partner, and commit to the relationship they want. Her website currently sees over 40,000 unique monthly views, and she has helped thousands of women create a successful dating strategy and get results in the love department, no matter what age they are.

“Grownups have a different perspective on dating. They don’t need someone to build a life with; they need to fit into each other’s existing lives,” Bobbi explained. “After dating for five, 10, or 20 years, it’s hard not to give up or lose hope. My coaching helps women find hope and find him.”

In private coaching sessions, Bobbi helps mature women take proactive steps to find love and build a loving relationship with a good man. She meets with women in person and over video conferencing to discuss their dating challenges. In just a few short weeks, the dating coach can get you feeling the confidence, competence, and hope that you need to put you on the road to love. The first three steps of her impactful sex-step system involves internal work on a person’as mindset, confidence, and standards, while the last three steps outline practical ways to meet, attract, and keep the right man.

Bobbi said, “My objective is that, after you’re done working with me, you have the tools and mindset to go out into the world and unapologetically go after what you want.”

As a dating coach, Bobbi excels at pinpointing what grownup daters can do to choose the right partner and make a relationship work.

The dating expert also hosts a free webcast called Girls’ Night Out to inspire women over 40 to free themselves from what’s keeping them single. Every month, she tackles a new dating topic such as where to meet high-quality men and how to choose a man who will make you happy. The webcasts offer a great opportunity for self-motivated women to learn about dating do’s and don’ts either live or on their own time via replay.

Bobbi is there for single women every step of the way. “The vast majority of men are looking for the same thing you are,” she said. “We all want someone to take care of and share our lives with.”

By giving advice in a down-to-earth way, Bobbi encourages women to assess themselves, tweak their bad habits, and learn how to fall in love with a grownup man. At the core of her approach, she told us, are three basic principles: Staying balanced, being kind, and taking responsibility.

1. Balance Your Head & Your Heart

Sometimes women have in their minds a checklist they hold fast to of the type of person they want, the kind of love story they’re looking for, and what they’re willing to do for it. Dating isn’t about thinking, though; it’s about feeling. Bobbi teaches women to balance the head and heart and use both when deciding who to pursue romantically.

In business and other parts of their lives, women can be entirely in their heads, led by their intellect. In their love lives, the opposite is often true. The choices, reactions, and ways they show up with men come from their emotions. Bobbie teaches women to balance their head and heart and use both when deciding who to pursue romantically.

2. Show Kindness to Yourself & The Men You Meet

Confident persistence is another key point for Bobbi. She doesn’t want her clients to feel demoralized or down on themselves for being single. Being overly critical of what’s going wrong in yourself isn’t a productive solution, so the dating coach aims to nip those insecurities in the bud.

“It’s important not to beat yourself up or feel like a failure,” she said. “There’s nothing wrong with you. There are just some things about dating that you don’t yet know — that’s where I come in.”

“It’s also important to remember the men you are meeting are just like you,” she continued. They have fears, insecurities, and frustrations about dating. Showing them compassion is key to making a meaningful connection.

3. Take Responsibility For Your Actions & Outcomes

Last of all, Bobbi empowers singles to take control of their love lives and realize what they can do to get in a romantic relationship. If single women own their actions, there are no excuses, just results.

“The truth is you’re single because of you. And that’s a good thing because you can fix you. You have control and can make changes.” — Bobbi Palmer, dating coach

Once Bobbi took responsibility for her own part in her failed romances, for instance, she was able to correct her mistakes and ultimately marry the perfect man for her. It’s not about feeling bad about yourself; it’s about learning new things and taking control of your behaviors to get a better outcome.

Over the years, Bobbi has racked up hundreds of success stories from former clients who found love because of her soulful advice. “I was at my lowest ever when I met you,” wrote Giselle, who sent Bobbi a thank-you note along with a photo from her wedding day. “I had to learn to love myself and be my own best friend… my prayers were answered beautifully. I am the happiest woman alive.”

Sometimes all it takes is a little push to inspire longtime singles to fix their negative dating patterns or attitudes. Bobbi knows how to deliver the hard truths with an encouraging and compassionate tone.

Bobbi described one client named Jeanine as a badass lawyer, earning a living by prosecuting cases and arguing her point. Single at 47, Jeanine told the dating coach she was looking for a man who could handle her. She pictured a cowboy or a policeman. She had a big personality, so she thought she needed someone tough and assertive enough to match her. Basically, a male version of herself.

“Bobbi helped me get clean on my must-haves, which single-handedly rescued this relationship.” — Vicki R., a 48-year-old client of Date Like a Grownup

Instead, Bobbi challenged her to flip the script and pick dates with more quiet strengths like kindness, generosity, and dependability. In private coaching sessions, they talked about how to fix Jeanine’s man picker and what steps she could take to put herself out there (like joining an all-male poker group) and meet a partner she could respect.

Finally, she met Ron online and found the perfect partner in an unconventional package. Instead of a tough powerhouse of a man, she got herself a caring partner who makes her coffee in the morning and warms up her car on chilly days. “He balances her in such a beautiful way,” Bobbi told us. “After four years of marriage, she’s happier than she’s ever been.”

Another former client named Lisa thought she was damaged goods after her second divorce. She didn’t have high hopes for her prospects, but Bobbi encouraged her to try online dating. The dating coach assured her that there was light at the end of the tunnel. She just needed to stop dating narcissists. Ultimately, Lisa met a wonderful man who is a good caregiver, and she now passes the relationship skills she learned from Bobbi to her teenage daughters.

“The work we do helps in dating and in other parts of life,” Bobbi said. “To really be able to help cool women like this is so amazing. I’m beyond grateful for that.”

Because Bobbi has been where her clients are, she knows what to say to guide them out of their funk and into a loving relationship. She has made that transformational journey and now provides empathetic assistance to mature women seeking their own happily-ever-afters. Whether it’s through one-on-one coaching sessions, powerful group and home study programs, or monthly webcasts, Bobbi delivers the heartfelt pep talk many singles need to get back out there.

“I don’t do fluff,” Bobbi said about her coaching style. “I want to be a resource for women over 40.”

As Veronica A., a 45-year-old single woman, said, “If you are truly committed to do your part in your search for true love, rest assured that Bobbi will compassionately, wholeheartedly, and passionately be your best partner to help you find it.”

“There are so many myths about dating, like that successful and independent women have to give up something to date,” Bobbi told us. “I want women to know, when you pick the right man, it’s a plus, not a minus. You need someone who enhances your already great life.”