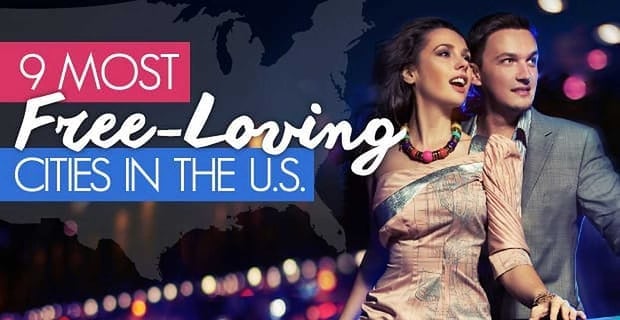 9 Most Free-Loving Cities in the U.S.

When it comes to free-loving, the U.S. may be a few steps behind Europe, which has long been overtly comfortable with sex as a part of culture, but a few select cities certainly stand out.

Open can mean a lot of things, whether it’s sexual orientation or willingness to reach across restrictive boundaries.

Here’s a roundup of the top nine cities in America that love to get their love on.

What place is more open to love than Sin City herself? Besides its notoriously scandalous reputation, Zoosk did a study that voted as Las Vegas the number one most open-minded city for dating.

If you’re looking to bust out of your comfort zone, there’s no place like Vegas.

New Yorkers might not be known for being warm and fuzzy, but that doesn’t mean they aren’t cool with getting heated. According to the 2014 Trojan Sexual Health Report Card, New Yorkers have an average of 25 sex partners in a lifetime — tied with Atlanta for the highest number.

NYC participants also reported feeling the most sexually in control. We should all look to be in an Empire State of Mind.

Atlanta tied NYC for the highest number of sexual partners at 25 in a lifetime. The Southern city was also voted the city with the highest sex drive and the most sexually adventurous.

Gotta get us some of those Georgia peaches.

Ain’t no party like a South Beach party. If Pitbull’s long list of chart-toppers hasn’t brought the 305 to your libido’s attention, allow us.

According to another Trojan survey, Miami residents claim to have sex 102 times a year. Well played, Florida. Well played.

For those looking to fulfill some fantasies, hop on over to Denver for some loving.

According to Forbes, Denver is the most lustful city in America, with contraceptive sales 189 percent higher than the national average.

Portland lovers aren’t looking for long-term love. According to The Richest, the Oregon city is open-minded about love and casual hookups.

Bonus: The city is also home to the Miss Exotic Oregon competition, which certainly gets our blood flowing.

New Orleans certainly has its fair share of eccentricities, but there’s also no shortage of eroticism in the city.

Aside from topless Mardi Gras celebrations, “The Big Easy” has a famously active LGBTQ+ community.

Seattle is home to the Pride Parade, where love is unjudged and abundant. Women are especially candid — Seattle has the second highest sales at Babeland, a women-friendly erotica shop, according to Quality Health.

Everything is bigger in Texas — even the sex drive. According to Men’s Health, the condom sales in Austin are higher here than anywhere else. Texas forever.