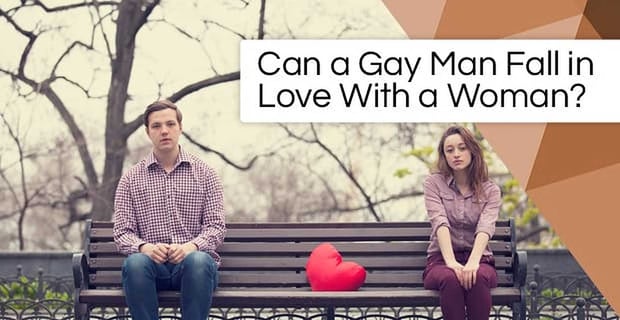 Can a Gay Man Fall in Love With a Woman?

A recent client of mine came to a counseling session struggling with some sexual identity issues about the fact that he was gay but had fallen in love with a woman.

He ultimately decided to continue pursuing his relationship with her; he was able to be honest with her about his sexuality while finding ways to honor and express the gay side of his identity within the boundaries they set forth. Love trumped eroticism in this case.

There Are Tons of Examples of People Experiencing This Situation

In a different example, when discussing this topic with my boyfriend, he reminisced about having been in love with three different women during his 20s and early 30s before embracing his desire for a same-sex union.

When assessing the dynamics of this situation, he relayed to me that how for him, even though he had strong feelings for these women, he was more in love with the idea and illusion of being with a woman as a defense against his internalized homophobia and desire to have children while he was still reconciling with his coming-out process.

So can a gay man become romantically or sexually attracted to a woman? Here are my insights:

There are no simplistic answers as to why and how we fall in love and with whom. Anything written by Stan Tatkin on the neurobiology of love will help explain some of the intricate dynamics behind this orchestration of falling in love. For a great majority of people, love attachment will likely coincide with one’s sexual orientation.

However, this is not always the case. In 1947, Alfred Kinsey and his colleagues Wardell Pomeroy and Clyde Martin developed the Kinsey Scale to reflect sex research findings that individuals’ sexual thoughts, feelings, and behaviors exist on a continuum from “Exclusively Heterosexual” to “Exclusively Homosexual.”

While many people may purport that their attractions remain consistent to one gender over the course of their lives, this is not an absolute and it is actually normative to have deviations in what and to whom we are romantically or sexually drawn.

Bisexuality Can Create a Conundrum

It’s difficult to discuss whether a gay man can fall in love with a woman without addressing the subject of bisexuality. Bisexuality has long been a controversial topic.

“The Bisexual Option” is a great read if you’re looking for views on bisexuality.

Because we live in a homophobic society, many discriminate against bisexuals because of the part of their sexuality that is drawn toward same-gender eroticism. Many in the gay community scorn bisexuals, claiming they are actually true homosexuals hiding behind the veil of bisexuality to capitalize on heterosexual privilege.

But as we’ve seen from the sexual fluidity argument and research findings, bisexuality does exist and is a viable sexual identity. The Williams Institute has some interesting statistics on the census of the LGBT population in the U.S., including 3.8% of adults identify as LGBT, with 1.8% of them identifying as bisexual. Also, “The Bisexual Option” by Fritz Klein is a good classic read on bisexuality views.

If you’re a gay man who’s in love with a straight woman, just know that this is perfectly viable and possible and doesn’t mean you’ve “flip-flopped.” Love can happen for anyone, TO anyone, at any time in the life cycle, and there are different shades to love, as depicted in the stories I told above.

What you will ultimately have to decide for yourself is what kind of shade of love relationship you want to have and what ingredients to that attachment you need to have to achieve the greatest personal fulfillment in your life. These relationships work best with a healthy dose of open and honest communication, frequent check-ins with each other to ensure each partner is still on the same page and in-sync, and that mutually agreed upon limits are established to protect the integrity of the relationship.

Who’s to say where the boundaries of love begin and end? The choice is yours.