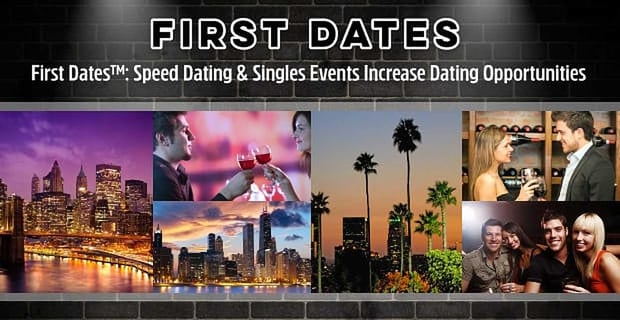 The Short Version: Over the past 10 years, First Dates has perfected the speed dating process and built singles networks in cities across the country, including Chicago, New York City, Philadelphia, and Los Angeles. The First Dates team expertly organizes singles-oriented events at bars, hotels, restaurants, and other venues to energize the local dating population with a fast and fun way to meet new people. At these speed dating events, single professionals turn out in droves to engage in five-minute conversations and establish chemistry with mutual matches. The structured and low-pressure environment facilitates romance between men and women of all ages and cultures. Ideal for time-conscious daters, First Dates offers an effective resource to increase your date prospects after a couple hours of mingling.

When my family got a new computer for Christmas in 2001, I immediately called dibs on our old PC, which was a Windows98. I know it was a hunk of junk, but it was my hunk of junk.

For years, I would wake up, turn on my computer, go eat breakfast, and, by the time I came back to get dressed (about half an hour later), the browser would be ready to go. I’d click a link and then go brush my teeth while it loaded the webpage, agonizingly slowly, for the next 15 minutes.

My Windows98 required a lot of patience with its slow-as-molasses loading times, so when I got my first laptop in 2008, I was amazed by how lightning fast it was. Suddenly, the entire internet was at my command, with absolutely no waiting, and it was sheer bliss.

At Chicago First Dates events, singles enjoy an efficient way to flirt and mingle with one another.

Speed dating events can feel just as liberating for singles who are tired of slogging through bad dates and dead-end conversations. In one evening, you can connect with dozens of potential matches and speed your way into a new connection with someone special.

For singles, we highly recommend checking out First Dates, a longstanding speed dating company that hosts events in dozens of fun locations. Since 2007, this professional team has organized singles-oriented events in numerous US cities, including Chicago, New York City, Philadelphia, Houston, and Los Angeles.

If you’re running out of patience with online dating or bar hopping, you can attend one of First Dates’ streamlined speed dating events near you to stop wasting time and start building relationships with singles who are more your speed.

“Professional people don’t have time to go out or go online to find that someone, so they come to our events,” said Damien Vega, Managing Director for First Dates. “We do all the work to bring people where they can meet like-minded singles like themselves.”

The Founders of First Dates and its sister companies came up with the idea to run speed dating events because they were looking for ways to drum up excitement at local New York City venues, including restaurants, bars, and hotels.

What began in 2007 as a venture to bring more traffic to NYC venues has turned into a national speed dating phenomenon.

Speed dating was an up-and-coming trend at the time, so the young college-educated entrepreneurs capitalized on it and began hosting speed dating events and singles parties in New York City. In 2007, NY Minute Dating took the local dating scene by storm, becoming so popular that the company has since expanded to big cities across the US and has plans to grow into Canada.

One of the hallmarks of the First Dates organization is using technology to bring people together. The company’s next project is a platform to send out events to active daters on its mailing list. Whether it’s a museum tour or a hiking group, this leading dating agency seeks to give men and women more opportunities to meet and have fun in the community.

“It’s meant to complement the events we host,” Damien explained. “We’re also a tech company, so we’re excited to build a platform around other events.”

Hosting Events in Dozens of Locations Across the Country

When you go on blind date, you never know if you’re going to have a good time or if you’re going to be counting the minutes until you can leave. That’s the time-wasting gamble so many daters feel forced to take, but there is another way. At First Dates’ speed dating events, you’ll only spend five minutes on each introduction before moving on to someone else.

“It’s like musical chairs,” Damien said. “Our speed dating events are more structured, so you sit down with dozens of dates in roughly two hours.”

Afterward, attendees log on to the corresponding city website to indicate which dates they liked and want to see again. If the interest is mutual, the platform automatically sends both individuals each other’s contact information, and the couple takes it from there. This process gives singles a low-pressure way to make a date based on established chemistry and mutual attraction.

Most of First Dates’ events are themed for daters of specific ages, cultures, orientation, or education levels. That way, you can target the type of person you see a future with. Whether you’re an older woman seeking a younger man or a Jewish man seeking someone of the same faith, you can have your pick at First Dates.

“Our customers run the whole gamut,” Damien told us. “We see professionals ranging in age from their 20s to their 60s and from all different cultures.”

Creating a Buzz Among Singles Who Enjoy Mixing It Up

First Dates has set the stage for countless romantic beginnings and successful relationships. It’s a rich environment with which to fill up your date calendar and get the most out of your love life. Many enthusiastic singles help spread the word by telling their friends about First Dates and sharing testimonials with the company.

One Chicago resident named Scott went into the speed dating event feeling skeptical but came away having “found true love,” according to his feedback. The 38-year-old said, “I have been dating someone I met at your event for over four months now, but it’s like we’ve known each other forever.”

“I didn’t realize how much fun it is to go to speed dating,” said David, a 45-year-old Chicagoan. “Everyone was really easy to talk to, and the host made everything fun.”

“Your event was perfect because I was able to meet more men in one evening than I could possibly ever have on my own.” — Stephanie, a 28-year-old single

Whether you come by yourself or with friends, these speed dating events encourage people to come out of their shell and introduce themselves to the dating world. Many attendees come away from First Dates’ events feeling excited and optimistic about their date prospects.

“Very specially crafted,” commented Andreia in a Facebook review. “For beautiful-hearted people to meet up and create something positive.”

“A couple of people have even got married, from what I’ve heard,” Damien told us. “Our goal is to provide a platform where people can meet and connect. And, if the relationship doesn’t work out, they can always come back to us.”

First Dates Puts You on the Fast Track to Romance

Once I realized my old PC wasn’t working for me and moved on to a faster modem, I found my online experience so much more enjoyable and productive. I no longer had to spend hours watching a webpage load pixel by pixel! Instead I could browse, click, and explore to my heart’s content.

If you want to upgrade your dating experience, speed dating is a fantastically efficient solution to stop waiting and start dating. First Dates’ well-structured speed dating events can get your love life up and running posthaste by introducing you to a roomful of date prospects in one evening.

First Dates is a national organization with ample resources to entertain, introduce, and engage thousands of singles across the country. Next time you feel like you’re wasting time waiting for your happily ever after to arrive, check out First Dates’ calendar. These speed dating and singles events expedite the dating process so you can quickly zero in on promising new connections.

“A lot of people love speed dating because there’s no pressure,” Damien told us. “They feel more open to talking and connecting in that type of way. I think speed dating is a great way to meet people in this day and age.”