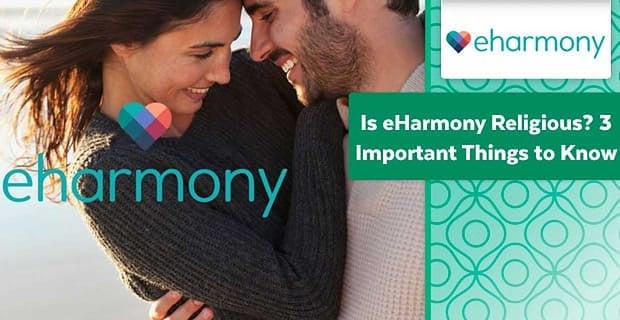 More than eight in 10 people identify with a religious group, according to the Pew Research Center’s Forum on Religion & Public Life. An article in Forbes says that there are almost 8,000 dating sites in the world, with dozens of them catering to a specific religion. Today, we’re going to talk about when online dating and religion collide.

We often get people asking us if eharmony is religious. If you Google “Christian dating sites,” it’s easy to see why. While the answer to the question “Is eharmony religious?” is simple, it does have some moving parts to it, so we’re going to break it down for you.

When you register for eharmony, you’re going to fill out the famous 29 Dimensions of Compatibility questionnaire, and you’ll be asked about your religious beliefs or spirituality. Options include Christian, Hindu, Jewish, Muslim, Buddhist, spiritual but not religious, neither religious or spiritual, or no preference. You can also select how important this question is to you (from not important to very important) as well as specific denominations for your matches.

For more information about what eharmony asks for during the signup process, check out this article. You can see more about eharmony’s demographics and user base, as well as its matching system and pricing, below:

As one of the major dating sites, eharmony has more than 33 million users from all over the world. These are people of various religions as well as ages, races, educational backgrounds, and appearances. The site sees more than 4.1 million monthly visitors who come from all walks of life. What they have in common, though, is they’re all looking for a serious commitment.

It Was Co-Founded By Christian Theologian Dr. Neil Clark Warren

While eharmony isn’t a Christian dating site, nor a religious dating site, it was founded on traditional Christian beliefs. Co-Founder Dr. Neil Clark Warren is a prominent Christian theologian, and he helped create the site and its matchmaking system back in 2000.

During the early years of eharmony, Neil was close with James Dobson, Founder of Focus on the Family, an American Christian conservative organization that promotes views such as abstinence-only sex ed, creationism, school prayer, and traditional gender roles. This is another reason people often think eharmony is a religious dating site.

However, Neil eventually cut ties with the evangelical Christian author and psychologist, possibly in the hopes of appealing to a wider audience.

Gay Men and Lesbian Women Can Join eharmony, But They May Like Compatible Partners Better

Another reason eharmony is viewed as religious is the fact that gay men and lesbian women couldn’t sign up for the site for many years. Until recently, if you identified yourself as a woman, you’d be automatically given men as your preferred gender, and vice versa. As a result, eharmony has faced many lawsuits that stated gay and lesbian singles were being discriminated against.

“We’ve suffered from the contentiousness of that topic,” Neil told CNN. “We didn’t want to pretend to be experts on gay and lesbian couples. We’re not anti-gay at all… it’s a different match.”

However, in 2019, eharmony did the right thing, became more inclusive, and began allowing same-sex matches.

Compatible Partners works exactly like eharmony, but it caters to gay and lesbian singles who want long-term relationships.

Despite its conservative reputation, eharmony has never been anti-gay. The company has endeavored to serve the LGBTQ+ community in its own way.

In 2009, eHarmony decided to reach out to the gay community by launching Compatible Partners, which is specifically for gay and lesbian daters. The signup, questionnaire, matching, and communication processes are all the same, and the site gets more than 370,000 visitors a month and is responsible for “a number of same-sex marriages,” as Neil puts it. See more of Compatible Partners’ success stories here.

Christianity is a fundamental part of eharmony and its history, but it’s not a 100% Christian dating site. Singles with all kinds of religious and spiritual beliefs (or lack thereof) are more than welcome to join and search for a date or partner. Since the site does all the matching for you based on your individual criteria, you’ll only receive religious matches if that’s what you want. If it’s not, then you won’t. Everything is up to you!

Lavalife: Review of the Site and 3 Alternatives