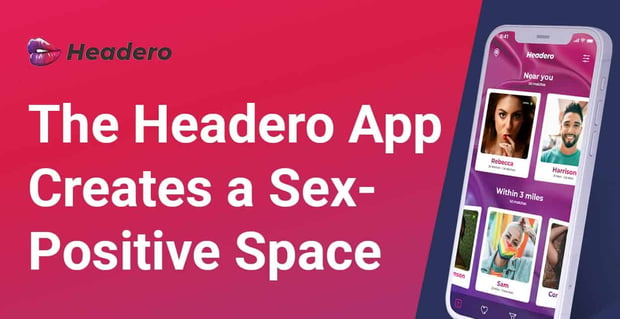 The Short Version: Singles who enjoy oral pleasure will find the online dating app Headero the place to connect with other singles who like the same thing. Headero is an inclusive and sex-positive app that welcomes anyone who is down to go down in their relationship. Oral sex is a popular sexual act that has become more common among sexually active adults, but finding people with that predilection isn’t always easy. To help change the way singles date, Headero aimed to create a safe space for people to openly admit their desire to give or receive oral sex with no judgment. Now singles can confess their love for oral pleasure while meeting potential partners who enjoy it just as much as they do.

The world may be heading toward a more liberal way of thinking, but certain conversation topics — such as oral sex — are still taboo. But the fact is that most people enjoy and love oral pleasure regardless of how much we try to avoid discussing sensitive sexual topics. According to BedBible’s research, 80% of Americans find pleasure in oral sex and 85% of Americans have tried to receive oral sex.

Considering these statistics, it’s safe to say that oral sex is a fan favorite. We’re living in a time where singles are more exploratory in the bedroom and they want to find someone who is equally willing to go on that same journey. Headero, a dating app for singles who enjoy oral pleasure, continues to put inclusivity and sex positivity at the forefront of the app.

“Headero is for everyone who seeks out sexual exploration and experimentation in an inclusive, stigma-free, and consent-grounded space,” said Stephen Quaderer, CEO of ThotExperiment.

Headero is proud to support an app for every adult with healthy sexual appetites. The app is a sexuality and gender-inclusive space that is designed to help people be comfortable with their sexual desires. Stephen told us that Headero’s intent is to be centered around oral pleasure, something that people of all identities can give and receive.

“Loving all the inclusivity this app brings to the table,” said an anonymous member in a review. “The search engine brings up potential matches that I didn’t know I would be “down” with. There’s a relaxed and no-pressure feel that’s unlike the other dating apps out there. Would definitely recommend giving it a shot.”

A Safe Space for Consensual Dates

Headero is the first dating platform created by ThotExperiment, a company that aims to support sex-positive, inclusive, and joyful platforms for exploration and experimentation.

As the first and only connection app focused around oral pleasure, Headero has taken steps to be a safe space for singles. Everyone on the app has similar agendas and an equal amount of appreciation for oral sex. Stephen said that people are likely to connect with other members who are just as down to perform oral sex.

“But we also wanted to enable our community to explore their interests and desires in other ways,” said Stephen. “So you can openly share what dynamics you’re seeking (for instance, dating, or a more casual meetup) or what kinks you’d like to explore.”

Oral sex is more than a pleasurable experience, it’s an encounter where people can explore their sexuality and connect with their partner on an intimate level. Headero empowers consenting adults to meet for exploration and pleasure. These relationships on the app can lead to a long-term relationship or a casual hookup — whatever floats your boat, it’s your decision!

Singles who use Headero can feel comfortable knowing that they are in a safe and nonjudgmental environment. Headero is paving the way for mature people to express their sexualities and gain liberation in sharing what they want to do in the bedroom — something that hasn’t been vocalized in the past.

“Headero’s resonance with people across sexualities, gender identities, and backgrounds is something I’m genuinely proud of,” Stephen told us. “We set out to make a space that people of all identities – including straight and LGBTQ+ people would seek out and join – and seeing that happen has been incredibly rewarding.”

My favorite part about being in a relationship is knowing that my boyfriend is just as willing as I am to rewatch “Sex and the City” for the fourth time. It’s fun to bond with your significant other over shared interests. Couples who share the same interests tend to argue less and have a happier relationship.

There’s beauty in connecting over shared interests, which is why Headero prioritizes creating opportunities for oral sex lovers to find each other. Headero hosts different events for members to socialize and meet. Sometimes being on an online dating app can make singles feel alone throughout the process. Events serve as a nice way to jump into the dating scene with a built-in icebreaker.

“This app delivers on its promise of creating a fun, safe, and open environment for people to explore and connect. So excited to see this community grow and be able to enjoy all this app has to offer!” said an anonymous Headero user in a review.

People can join Headero at no charge, and use chatting features to find potential matches nearby.

Members who want to upgrade to a premium membership can subscribe to Headero’s Bliss Mode which allows members to filter their searches for others who share specific interests. Bliss mode also allows members to see more profiles, know who favored them, and access many more enhanced features.

“You’re also able to share a wide range of interests, dynamics, and kinks – so you know that the people you’re connecting with are compatible with what you’re seeking,” said Stephen.

Headero was created by ThotExperiment to change the dating game, and it has blossomed into a growing consenting space for singles.

“Great app interface and also love the fact I can hook up with both guys and girls whenever I want. Definitely ready for my next head!” said an anonymous Headero user in a review.

The Headero team prioritizes member safety on and outside of the app. Headero focuses on helping singles find partners with whom they can share their interest in oral sex in a safe manner. Stephen told us that Headero created privacy and data-safe space for the community. Headero also shares many tips on safety in its many forms: emotionally, sexually, physically, and psychologically.

Members of the app are expected to abide by the community guidelines. The core guidelines are: Headero is for everyone, Headero is pleasure positive, and Headero supports enthusiastic consent, every time. Members who don’t abide by these guidelines will be either suspended or banned from the app.

Stephen told us that the Headero team is working toward making the app a better space for singles. He shared that the next big feature the team is currently working on will educate and enrich the Headero community.

“We plan to enable deeper connections and conversations across our community,” said Stephen. “In the future, we want to provide educational resources and share how singles can engage in activism aligned to our core mission of sexual liberation, and connect with partners in the sexual wellness and exploration space that have aligned missions and values.”