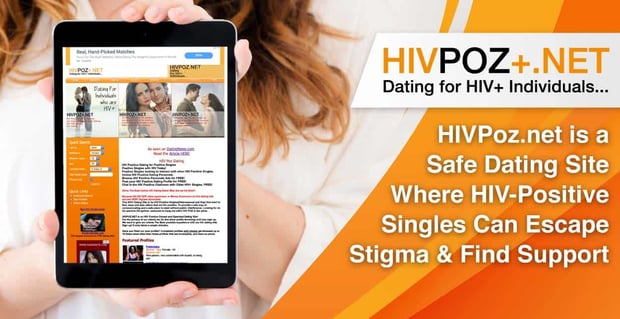 The Short Version: Since its launch in the 1990s, HIVPoz.net has been a safe haven for singles who have been diagnosed as HIV-positive. Such a diagnosis can be life changing, but it doesn’t have to mean the end of all personal relationships and sexual experiences. As a niche dating site and community, HIVPoz.net can help HIV-positive singles make a fresh start with authenticity and courage.

When the first cases of HIV/AIDs were discovered in June 1981, medical professionals didn’t know why gay men seemed particularly vulnerable to the disease, nor did they fully understand how the disease spread.

That opened the door to a lot of dangerous misconceptions. AIDs was initially called gay-related immune deficiency (GRID), and some conservative groups saw the epidemic as punishment for the sin of sodomy.

However, as HIV/AIDs became a global crisis, it became clear that the disease could befall straight and gay people alike. By 1990, health experts estimated that as many as 10 million people were living with HIV.

HIVPoz.net has created a dating network for singles who are living with HIV.

AIDs has claimed more than 700,000 lives since the 1980s, and an HIV diagnosis in those early days would cause a great deal of panic. However, today we know a lot more about HIV, including how to fight it. HIV cases decreased by 7% from 2010 to 2015, but over 1 million people still live with the disease — and 15% don’t know that they’re infected.

Singles who are HIV-positive may not face the same dire, life-threatening odds they did in the 1980s, but they can still face harsh judgments, stereotypes, and prejudices as a result of their illness. That’s something HIVPoz.net seeks to change one love match at a time.

This niche dating site has countered the negative stigma against HIV singles by actively promoting a positive and safe environment. For over 25 years, HIVPoz.net has given HIV-positive singles a place where they can connect with one another and build friendships and relationships.

“HIVPoz.net is an HIV-positive owned and operated dating site,” according to the site owners. “We want to give our clients the best possible experience with our HIV dating site.”

An anonymous straight man created HIVPoz.net after being diagnosed as HIV-positive and experiencing negative repercussions in his love life as a result. He decided to create a dating site where people could be open about their health status, meet people who shared similar experiences, and raise awareness about HIV in the dating scene.

The HIV/AIDs epidemic may be over, but there is still a stigma against dating someone with HIV. Many people reject singles with HIV because they have misconceptions about what it means to live with HIV and how contagious the disease is. They don’t understand just how manageable HIV has become.

Living with HIV can be difficult, but HIVPoz.net can make the dating aspect a little easier to manage.

“HIV transmission can be prevented and reduced and eliminated,” according to The Good Men Project. “When the HIV-positive partner is on daily antiretroviral therapy and has an undetectable viral load, the risk of sexual transmission to the HIV-negative partner is effectively zero.”

Thanks to HIVPoz.net, singles can come together and talk about HIV without passing judgment. Everyone on the dating site is open about their positive status — it’s right there on their dating profiles — and that makes it much easier to broach the subject with a potential date.

HIVPoz.net has free dating personals and chat rooms dedicated to the HIV-positive crowd, and the moderators strictly police the site to ensure no one is harassed, scammed, or bullied here. The site owners say they are vigilant about protecting the HIVPoz.net membership base and looking out for their best interests.

The HIVPoz.net team is sensitive to the safety and privacy concerns of HIV-positive singles, and they have promised not to sell any personal information to any third parties.

“We do use cookies to store information, such as your personal preferences when you visit our site,” the HIVPoz.net team said. “This could include only showing you a pop-up [advertisement] once in your visit.”

HIVPoz.net is one of the leading dating sites for singles with HIV, and many singles have trusted it to help them move forward after an HIV diagnosis or a breakup.

Raising Awareness About the Challenges & Opportunities Ahead

It’s free to create an account on HIVPoz.net. All you need is a valid email address, and you can start browsing the site in search of potential partners. The site has Quick Search options for gender, age, and location. Singles can also conduct a more in-depth search using advanced filters for height, education, occupation, religion, body type, and other characteristics. To narrow the search further, you can click “photos only” and cut out profiles that don’t have photos in their albums yet.

Singles should note that HIVPoz.net dating profiles that include complete information and genuine photos are viewed roughly 15 times more often than are incomplete dating profiles.

Every day, singles turn to HIVPoz.net to find comfort and solidarity.

HIVPoz.net is an open-ended dating site where singles can be themselves and build online connections. Singles can identify themselves as seeking a casual date, romance, a relationship, a travel companion, an activity partner, friendship, or marriage.

“My heart sent me here,” wrote a 53-year-old construction worker from Madison, Wisconsin. His dating profile identified him as a sports-loving Catholic in search of a monogamous relationship with a down-to-earth guy.

Singles don’t have to disclose their names or even publish photos on HIVPoz.net, so they don’t have to feel exposed on this discreet dating site. Whether you’re a college student, an entrepreneur, or an executive, you can keep your real-world identity to yourself and explore HIVPoz.net as an anonymous HIV-positive individual.

If you see someone who sparks your interest, you can make contact by sending an instant message, email, favorite, or virtual kiss. Sometimes singles reach out with romance in mind, but others are simply looking for someone to talk to about what’s going on in their lives. HIVPoz.net makes it easy to reach out, so singles with HIV don’t have to feel alone.

“I am a very caring and loving man. I’m not really into the social scene like I used to be,” wrote a Texan looking for new friends. “I am the kind of person who will give you the coat off my back if you are cold.”

In the last 40 years, the world has changed dramatically, and that is particularly true when it comes to how we treat HIV-positive people. HIV was once widely regarded as a death sentence, but now it has become a manageable autoimmune condition with many supportive resources and communities rallied around anyone diagnosed as positive.

HIVPoz.net stands behind positive singles and provides live chatting tools to help them socialize, flirt, and date despite their HIV-positive status. The dating site isn’t just about finding love — it’s about finding a constructive way to move forward and meet people who share similar life experiences and health concerns.

“Looking for an HIV-positive life partner, someone to hang out with? HIVPoz.net is the place,” the team says. “Sign up! It only takes a couple minutes.”