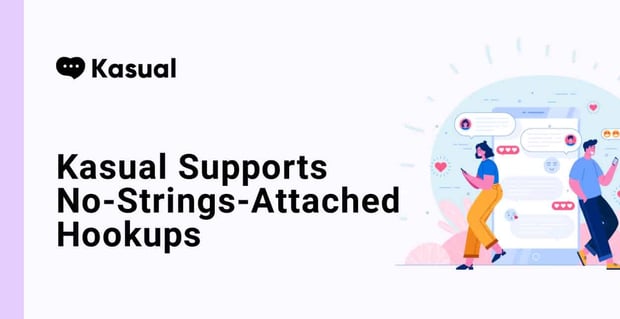 The Short Version: Some singles looking for casual hookups don’t feel welcome on typical relationship-focused dating sites. Kasual is an app for daters who aren’t looking for anything serious but still want to have a good time. Users can find other locals interested in hookups that don’t require any long-term commitment. The app also offers strict privacy settings and a match roulette feature that allows users to chat for free.

In 2018, Craigslist Personals shut down. The personals section was a place for singles to find casual hookups, but the Fight Online Sex Trafficking Act, designed to crack down on online sex trafficking, meant the platform could be held responsible for the ads its users posted.

Of the closure, Craigslist wrote: “Any tool or service can be misused. We can’t take such risk without jeopardizing all our other services, so we are regretfully taking Craigslist personals offline. Hopefully we can bring them back some day. To the millions of spouses, partners and couples who met through craigslist, we wish you every happiness!”

Though Personals was a loss for those seeking casual hookups, Craigslist was never a safe option in the first place. The platform offered no identity verification, so even if users hit it off, they may not have felt comfortable meeting in person.

At the same time, dating apps have exploded in popularity, but few filled the niche for no-strings-attached hookups. Even Tinder, the original hookup app, started gearing toward relationship-building after its acquisition by the Match Group.

Derek Ma recognized the need for an app where singles who are uninterested in long-term relationships could meet. So he created Kasual, an app designed for users seeking only hookups, casual sex, and other types of commitment-free intimacy.

“Many people are not ready for a long-term relationship and just want to have fun in a non-time-consuming way,” said Derek.

Kasual officially launched in 2019 and has filled a gap in the industry by attracting users worldwide.

Courting Singles Who Don’t Want to Get Serious

Mainstream dating apps offer two popular options to approach casual fun, and neither has an excellent success rate. Users can say they’re only looking for hookups on their profile and risk judgment. Or they can have an awkward conversation with their recent match about how they’re not interested in a serious relationship.

Many singles also don’t understand how much time it takes to set up a profile on a traditional dating app. Those seeking casual hookups may not want to share their personal information with such a vast pool of people. Others want to forgo the personality questions and skip straight to the point.

Kasual doesn’t require personal information to create a profile. The team only needs to verify a photo and age so it can authenticate users and promote safety. But the platform does recommend that users feature an authentic, recent profile photo to increase their chances of finding a match.

Other than that, users control how much of themselves they want to reveal to potential hookups.

Kasual has attracted 5.1 million users worldwide. Most users (68%) are from the US, and the second-largest percentage of Kasual’s clients (11%) live in the UK.

“I dig the app and everything it offers. It does exactly what it’s supposed to do: show you people who are in the distance and gender you specify in your settings and allows you to chat with anyone you flip over. If you like them, and they like you, just chat with them and see where it goes. Just the way I like it,” one user wrote of their experience.

Adding an Element of Suspense

Derek wanted to make Kasual as fun as the hookups its users were seeking. He included a card game feature that adds mystery to user interactions on the platform.

“There is a bit of luck involved which helps add to the thrill. If users play the cards right, they might get lucky tonight,” Derek said. “It’s like no-strings-attached roulette, but with bigger and better rewards.”

Users are presented with four cards and have to pick one to flip over. Each round, they have a 50% chance of finding a match. If they do, they earn the chance to send a free message to that person.

“When you randomly flip someone’s profile, you can initiate a chat without a subscription,” Derek said.

If users lose their gamble, they can still talk to others on the site without payment. If both users like each other, it’s a mutual match. That makes it possible to start a conversation for free.

The last option is a Super Flip, which lets users chat with someone else on the app immediately. Free users receive one Super Flip per week, while subscribers — aka the Kasual Elite — get six Super Flips per week. They are also available for purchase.

The gamification makes Kasual fun and useful, with 95% of users reporting that they are satisfied with their experience.

“Users make genuine connections online and meet each other in person, ultimately,” Derek said. “Kasual allows members to share sexual preferences with anonymity, and they don’t need to worry about friends or friends of friends seeing them.”

One of Kasual’s most valuable features is its anonymous nature. Many other dating apps require a considerable amount of information from users, forcing them to answer questions, create memorable usernames, and curate a collection of photos.

Kasual collects only limited personal information, and users don’t have to share their names or social media profiles to access the platform. They don’t even need to post pictures of their faces.

“All personal information isn’t required except the age and verification photo. To protect minors, we need to know every member’s age and remove underage profiles immediately,” Derek told us.

But anonymity can be convenient for scammers. The less profile information members have, the harder it is for the team to spot scams. So Derek and his team developed a way for users to stay anonymous while staying safe.

“Every new user needs to be manually reviewed and approved by our customer service department. That means we can confirm they are who they say they are,” Derek said. “Most importantly, it allows users to remain anonymous while still ensuring they’re genuine profiles. And our stringent verification process outstrips the safety features of the competition.”

Even though the app promises users a safe experience, the team still has plans to improve its privacy and user experience.

For example, the site’s developers know women typically receive more unwanted photos and texts than men. So the team plans to roll out more options to control what users receive on the app. The team also found that women desired a safer environment to share their sexual needs, so that’s the path the app plans to take.