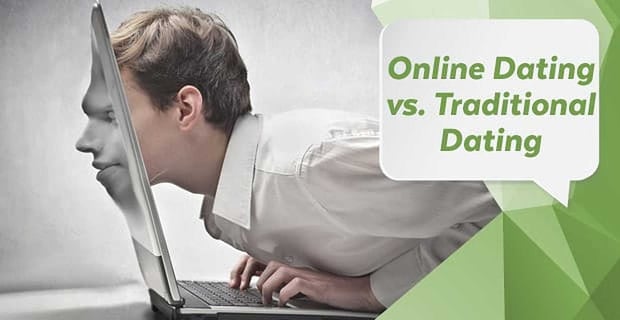 Lots of people come to us wondering if they should be doing online dating or traditional dating (e.g., getting set up or meeting someone while out and about). The answer is you should do both.

But, as with everything else in life, there are some moments of online and traditional dating that are great — and then there are moments that are a pain in the ass. Here are 12 pros and cons of using a dating site as well as trying to meet someone offline.

The Positives of Online Dating (#1-3)

Let’s start with the good news, shall we? Online dating has been around since the ’90s, and it’s only getting better and better as the years go on. Singles are getting more options, dating websites are adding more impressive technology, and the success rates are getting higher. Below are some more details about the top advantages of online dating.

With almost 8,000 dating websites out there, online dating can be like shooting fish in a barrel. From the general to the extremely niche (sea captains, anyone?), there’s a dating site for practically everyone. And you can browse them all from the comfort of your couch.

In addition to having a seemingly endless number of choices, pretty much every dating site offers a free trial or membership, so you won’t have to pay anything to test it out. If you’re not a fan of one site, just cancel your membership and move on to the next — at no risk to your bank account!

2. There Are Millions of Singles in One Place

When you’re out at a bar, club, party, or any other social gathering, there are probably 50 to 100 people there, right? And you’re not sure which ones are single. When you’re on a dating site, there are millions of people, and, for the most part, you know they’re all single.

Online dating is one of the only places (if not the only place) where millions of singles come together. Photo source: TheOdysseyOnline.com.

The beauty of dating websites is they have things like in-depth profiles, extensive search features, and advanced matching algorithms that help you sort through all of these people and allow you to be as specific or as broad about your needs as you want.

3. It Works: 20% of Relationships Start Online

Research conducted by Statistic Brain says one in five relationships begin online and almost the same number of marriages do. The science has spoken — online dating works! For more incredible statistics about online dating’s success rates, you can check out our article.

The Negatives of Online Dating (#4-6)

We won’t lie — online dating does have some cons to it. However, we believe the good outweighs the bad, especially if you know how to make the most of it and stay safe.

The FBI received 15,000 complaints about online dating scams in 2016, ranging from people being cheated out of money to experiencing worse.

People with bad intentions exist all over the world, and they tend to flock to the internet because it’s so easy to be anonymous. While scams are a scary part of online dating, there are ways to avoid them, which can be found on our list.

5. It Can Be Addicting & Frustrating At the Same Time

Numerous studies show that online dating addiction is a thing. We’re all glued to our phones anyway, so when you add attractive people and swiping to the mix, it almost becomes like online shopping. “No, he’s too short. Who’s next?” “Oh, she lives an hour away? Nah, I’ll find someone else.”

Swiping makes online dating feel like a game, but if you’re not seeing results from it after awhile, it becomes discouraging. Photo source: AskIdeas.com.

That can be fun for a while, but if it’s not getting you anywhere (e.g., a hookup, date, or relationship), eventually online dating will become annoying and a hassle. Daters sometimes focus on the game-like atmosphere online dating can have and lose sight of their end goal.

6. You Could Become Too Picky

Not only can online dating feel like a frustrating, yet addicting, game if you’re not having any luck, but it can also cause us to become too judgmental of others. While we’re scrolling and swiping, we often pay attention to tiny “flaws” that aren’t really there and/or don’t matter in the long run. This can be stuff like their hair was doing this weird thing in that one photo, their eyes are green instead of blue, their favorite movies don’t align with our tastes, or they don’t like cheese.

The Positives of Traditional Dating (#7-9)

Before online dating (read about how it all got started here), people were connecting via personal ads, happy hours, or mutual friends. You probably see the upside of this if you’re not the biggest fan of online dating or the internet, in general. Let’s talk about some other positives.

7. You Can Determine Chemistry Right Away

In terms of online dating, all you have to go off are photos and messages you send back and forth with matches. You can think they’re attractive and get a good banter going, but then the chemistry could fizzle once you go on that first date. For some reason, the spark just isn’t there in person sometimes.

In terms of traditional dating, most of the time you’re meeting someone for the first time on a date, and you haven’t shared a lot of information about yourselves. This makes the conversation more exciting as you ask each other questions and makes it easier to see right away if there’s something there. You’re not spending days or even weeks messaging — only to find out the butterflies aren’t there in real life.

8. It’s Harder for People to Lie

According to eHarmony’s findings, more than half of online daters lie in their profile. While women tend to subtract from their age or weight, men tend to add to their income. When someone’s on their phone or sitting behind a computer, it doesn’t feel as bad to do that kind of stuff. But when you’ve got a date looking right at you, your conscious often wins out.

For most people, lying is more difficult when looking into someone’s eyes than it is if they were behind a computer screen. Photo source: YouTube.com.

We’re not saying there aren’t some good face-to-face liars out there, but when you meet for the first time in person with no prior conversation, you can immediately ask follow-up questions and see if they’re acting weird or if their stories aren’t adding up.

9. Being Set Up By a Friend Can Make It Easier to Break the Ice

Maybe you two have the same passion for cycling and that’s why your friend thinks y’all would be a good match. You already have something to talk about when you go have coffee or dinner. If it’s a mutual friend, then you both could share some stories about your experiences with them. It’s definitely less awkward than having to start a conversation from scratch all by yourself online.

The Negatives of Traditional Dating (#10-12)

Now for the bad news about traditional dating. Whether it’s pulling yourself away from Netflix or agreeing to at least meet your friend’s cousin’s best friend, looking for a date offline has aspects that you’re not going to enjoy.

Well, first you’ve got to find someone to date, and who knows how long that will take — especially if no one is setting you up on dates, and you aren’t the biggest social butterfly. You’ll probably have to go through a few of your friends’ suggestions or some weird conversations at the bar before you find one you’d want to go out with.

After that, then the real date planning starts. You’ve got to decide what to do and when. On the night of, you’ve got to shower, choose an outfit, do you hair and/or makeup, drive there, and then drive home. Sure, you have to do these last few things if you’re online dating, too. However, there are fewer initial steps.

11. You’re Limited to Your Own Area

Chances are you’re not going to get dolled up and travel two hours away to try to meet other singles. It’s risky because you might not see anyone who catches your eye. So sticking around your area makes more sense. However, if you work all day or get stuck in a rut, you’re likely to go to all the same restaurants, events, and places you normally go to and will end up seeing all the same people. Traditional dating makes it harder to expand your physical boundaries.

On the flip side, with online dating, you can expand your physical boundaries and meet people from all over the city, state, country, or world if you want to. We’ve heard plenty of stories about people falling in love online even though they lived miles and miles away from each other. Eventually, someone ends up moving and things work out.

We’ve got to play devil’s advocate here. You’re bound to have first dates where the chemistry is instant and electric as we mentioned in number seven. But you’re also bound to have dates that don’t go so well because you haven’t gotten to know each other as online daters might have and don’t know what to talk about. Sometimes traditional dating puts more pressure on you to be funny and charming on the first date.

Online Dating or Traditional Dating? Why Not Both?!

Traditional dating has been around since the beginning of time, so it’s not going anywhere. Online dating is a new kid on the block in comparison, but in this technology-driven world, we don’t think it’s going anywhere either. You could see the glass as half empty on both of these forms of dating, but we’d recommend that you see the glass as half full and take advantage of both while on your journey to love or whatever it is you’re looking for!

As a Contributing Editor for DatingAdvice.com, Brittney’s research background gets put to good use developing thorough articles and guides for the informed dater. She enjoys going on new adventures and finding activities that provide unique mental and physical challenges.

“Should I Try Online Dating?” — (7 Things to Know Before Joining)

Fight Spring Fever with a New Way to Meet People

7 Quick Ways to Meet Singles in My Area