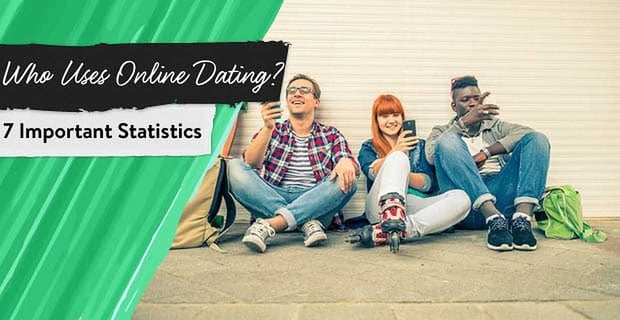 Approximately 8,000 dating sites exist on the web, and about 49 million people have used a dating site or app. Who are these people, though? What are their goals, personality traits, backgrounds, cultures, and lifestyles?

We’ll answer those questions and more in this article. Here are seven interesting facts about online dating users.

Online dating was created in the ’90s, so it makes sense that millennials would use it the most. It also makes sense that people who are 65 or older would be the least likely to use online dating. They’re either already married or may not be as comfortable with technology because they didn’t grow up with it. However, that could change in the future as more senior dating sites come onto the scene.

According to eharmony, the gender breakdown for online dating shows there’s a small difference between men and women: 52.4% compared with 47.6%, respectively.

While men outnumber women in terms of online dating use, it’s not by much.

This also seems to be the case on apps like Tinder and hookup platforms like BeNaughty, where men are more likely to join.

A potential date or partner’s income can be important to a lot of singles, and we’ve found that income levels don’t really vary greatly online. Statista, a provider of market and consumer data, says that 16% of people who make between $30,000 and $74,999 a year have signed up for a dating site or app. The second largest group (15%) have an annual income of $75,000 or more, followed by those who have an annual income of less than $30,000 (11%).

Some people and media outlets say that online dating has created a hookup culture, but the numbers say that’s not the case.

Contrary to some reports, most online daters want to find a lifelong partner.

According to Statista, more than 8 out of 10 online daters are looking for a long-term relationship or marriage. In addition, one-third of married couples say they met online, and those people are more likely to say their marriage is satisfying.

5. Education: 16% of College Graduates Have Used a Dating Site

6. Race: 14% of Caucasians Have Signed Up for a Dating Site

As more minorities make up the population, the more diverse our world becomes, and that is true for online dating as well. However, Caucasians still make up the majority of the online dating population. About 14% of Caucasians have joined at least one dating site, and 8% have joined a least one dating app, according to that same Pew study. In terms of black singles, the numbers are 11% for online and 10% for dating app use. Meanwhile, 7% of Hispanic singles reported using online dating sites, and 10% have used a dating app.

7. Location: 13% of Those Who Live in Urban or Suburban Areas Have Tried Online Dating in the Last 3 Years

Dictionary.com defines an urban area as “a city area considered as the inner city plus built-up environs, irrespective of local body administrative boundaries.” The site defines a suburb as “a district lying immediately outside a city or town, especially a smaller residential community.” In addition, the site defines rural as “living in the country.”

Online Dating is for Everyone & Anyone!

More and more dating sites are launched every year, particularly niche dating sites, so there really is an option for almost every single person on earth. Because of its reach, adaptability, convenience, and success rates, online dating has attracted people from all walks of life.

Whether you’re young or old, rich or poor, straight or queer, you can find a dating site that caters to people just like you — or just like the people you want to date.

If you haven’t checked the online dating scene out yet, it’s worth your time. Our experts have even narrowed down the best dating sites if you’re not sure where to start. Have fun!

Badoo: Review of the App & Site — (Plus Our Top 3 Alternatives)