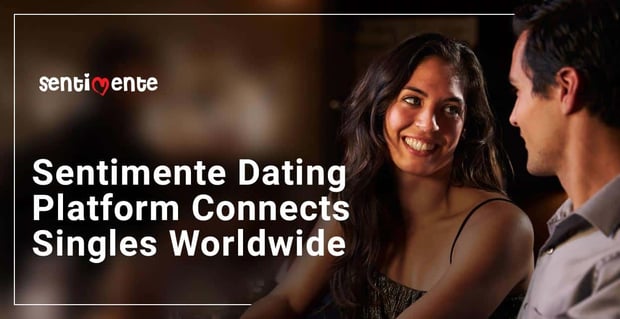 The Short Version: Many dating sites are a flash in the pan, but that isn’t the case with Sentimente, which celebrated its 20th anniversary in 2021. The dating platform’s longevity and devoted fan base provide singles with confidence as they search for romantic partners. And Sentimente verifies each profile, inspiring trust in the platform and giving users peace of mind.

Florina and Tom lived in two different countries, but both joined the Sentimente dating app at around the same time. Tom lived in London, while Florina called Bucharest home. Both decided to search for love online after their decades-long marriages ended.

Florina had been using the site for a few months when Tom sent her a message. “Hello! I’ve been a Londoner for 15 years … your description is brutally honest,” he wrote.

She wrote in her online testimonial that she wouldn’t have typically responded to someone who lived so far away, but she was charmed by his message. Soon, they were having long conversations about Exupery’s “The Little Prince,” their views on life, and their values. They recognized how much they had in common.

Neither Tom nor Florina liked talking on the phone or on video calls, so they mostly typed to each other. When they finally met face to face, they understood the connection was real, and they quickly fell in love.

“There is a lot to talk about, but I will just say that magic truly exists! That Tom is the love of my life, that I am madly in love with him, and he is madly in love with me,” Florina wrote in her testimonial. “We are two very lucky people on this Earth. We were fortunate enough to find each other in this huge world.”

Florina and Tom join Sentimente’s long list of happy couples, and the site has been helping partners find each other since 2001.

“Over the past 20 years, Sentimente has helped thousands of couples and gathered hundreds of success stories from users, some of them resulting in marriages,” said a spokesperson for Sentimente.

Verifying the Authenticity of Every User Profile

In 2001, Sentimente began operating as a platform in Romania. Over time, the site attracted users worldwide and is now translated into English, Spanish, Italian, and German.

The site also boasts a significant number of users. More than 1.5 million people in Romania and abroad have accounts, and 25,000-plus people log onto the platform each day. Around 25% of Sentimente users are international, primarily from the United States, England, and Germany.

Sentimente has maintained its popularity for more than two decades by offering intuitive features and a pressure-free user experience.

Perhaps the most popular feature is profile verification. The team checks each user, and their photos only become public once vetting is complete.

“It gives people the confidence that there’s no catfish behind a profile and that the person in the photos is real,” said the spokesperson.

“One investment and innovation is WallY, a software program. WallY tracks the user’s profile based on their settings, finds out their requirements, and indicates the percentage of compatibility with other users. In that way, users are more likely to meet a compatible person,” the spokesperson told us.

When users create profiles, they can share details that help like-minded partners find them. For instance, users can specify their interests and passions, write about how they spend their free time, and describe their lifestyle preferences.

Users also have high levels of privacy when using Sentimente. For instance, singles can decide how open they want their profiles and choose their preferred contact method. The site also has features that protect users from scams and harassment.

Sentimente users are serious about finding partners, especially since the COVID-19 pandemic brought more people into online dating. Based on a recent questionnaire, 85% of Sentimente users consider themselves serious, meaning that most singles use the platform to find love.

Some survey participants also shared their thoughts about the platform.

“I have no suggestions. Both the help you have provided, as well as the assistance, were excellent. Thank you,” said one user.

“I’ve found my soul mate. I was satisfied with the site and didn’t expect to find someone so fast. In the four months I’ve been here, I was contacted by a couple of women, and everything went smoothly,” added another.

Sentimente also rolled out a useful new feature called Anonymous Call because so many singles sought love during the COVID-19 pandemic. Users can contact other singles directly from their laptops, tablets, or phones without being seen. The feature is intended to replace the traditional phone call, but without the need for users to exchange numbers.

“This is especially useful if you’ve only been talking to a person for a short time and you’re still feeling the heat. Then, when trust starts to grow, before an actual meeting, users can use the video call feature so they can chat face to face with the person they like, but in a safe environment,” said the site’s spokesperson.

Few modern dating sites or apps have been around as long as Sentimente. After 20 years of innovation, the platform has added many new features that keep it current, including instant messaging, data security, and a virtual café.

The WallY platform has been especially well received.

“WallY learns how to correlate observed behaviors and preferences with compatibility, and eases the process of people interacting on our dating website. We invested in this new feature because we felt that the online dating market is addressing to a new generation — familiar with the newest technologies — and we want to be among the first ones to provide that,” Sentimente Co-Founder Flori Dragomir told Business Insider.

The site was also quick to add more features when singles couldn’t meet up in person during the pandemic.

“These features are particularly useful given the increasingly short time people have to get to know someone and build a relationship,” the spokesperson told us.

While most sites inevitably charge membership fees, Sentimente has been free since its inception — and will remain that way.

Beyond the site’s longevity, the key to its success has been the seriousness of its users. Most Sentimente singles are attracted to a website that has helped many couples build long-term relationships and marriages.

“Long story short, Sentimente is a dating site addressed to single persons who are looking for a serious relationship,” the site’s spokesperson told us. “And the team behind the site does everything possible to help them find their true love more easily.”