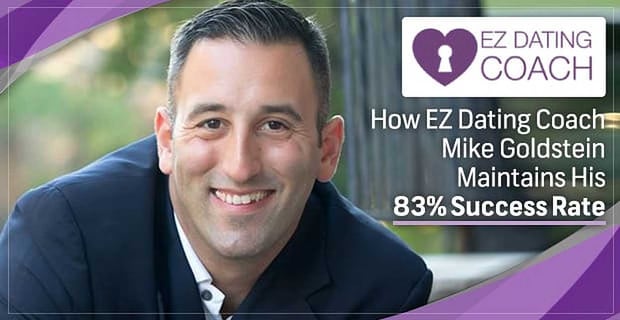 The Short Version: Everyone reacts to the end of a relationship in different ways; some people cry for weeks, others go through pounds of ice cream, some do both. But when Mike Goldstein was going through a breakup, he did research — eventually becoming the expert on dating and relationships known as the EZ Dating Coach. Today, Mike has an impressive 83% success rate as a dating coach, with every eight out of 10 clients ending up in a relationship. Mike has maintained his success by using comprehensive analytics based on information from the largest dating websites to help women find the caliber of men they want and deserve. He knows the stats on everything, from pictures to get the most hits to how many dates to give a guy before giving up. Mike has perfected his statistically proven methods over 10 years, crafting a coaching process that works for women everywhere.

My roommate’s last relationship was a proper tragedy: there was jealousy, intrigue, even flying crockery; and the breakup was, to all accounts, worthy of a Hollywood romance. In proper fashion, she spent a solid three months sobbing on the sofa, mourning her lost relationship, and asking — repeatedly — the same question we all seem to feel needs answered: What went wrong?

When EZ Dating Coach Mike Goldstein’s five-year relationship saw its demise, he, too, asked that infamous question. The big difference between my roommate, and Mike? He worked to find the answer.

“I read every book you could possible imagine, studied the experts,” Mike explained. “I became very knowledgeable about dating and relationships.” It wasn’t long before Mike was the go-to resource for his friends, and he started helping them find relationships. “I even got six of them married!”

With such undeniable results, his friends suggested he should turn his hard-won wisdom into a career. Mike became the EZ Dating Coach and was soon a leading expert on online dating.

Today, Mike has a success rate of 83%, with eight of his last 10 clients in relationships. He’s achieved that by focusing solely on what has been proven to work. He makes sure every part of the process has data to support its effectiveness.

“I’m not going to give anyone nonsense advice,” said Mike. “If I give advice, I’ve tested it. If it doesn’t work for 97.5% of people — I won’t give that advice. I’ll take it back to the drawing board, tweak it, and make it better.”

Mike’s process starts with the numbers. He has data from the largest dating services, and he puts it to work for his clients. “I don’t know anyone who has completed the analytics I have,” he said. Of course, there’s a lot more to it than arithmetic.

“It’s not something I did overnight,” Mike said. “It took me about 10 years to fully fine-tune my process, to calibrate it so it works so effectively and so often.”

Most of Mike’s coaching takes place in person, one-on-one. He works with each client for six months, meeting at least every two weeks. He helps them set up online profiles, select the photos to post, and even craft the perfect messages to send to potential matches.

With Mike’s help, it doesn’t take long before they find the right match. “I’ve found that my clients only need to go on about six to eight dates to find someone with whom they want to move forward.”

According to Mike, most clients enter monogamous relationships around month three or four — but his coaching doesn’t end when they leave the single life behind.

“We spend months five and six making sure they’re handling any conflicts that come up and really getting everything that they need out of the relationship,” he said.

With all the talk about analytics, we got curious — what do the numbers actually say? Here are some of Mike’s best, statistically proven, advice for finding your next relationship online.

While many online daters have become familiar with the statistic that profiles with pictures are nine times more likely to receive messages, the importance of the types of photos is less well-known.

“Believe it or not, your face should only be about 8-15% of your photos,” Mike revealed. “Effectiveness starts to substantially drop off as you get too close to the camera.” Translation: no more selfie close-ups. Your picture should have an actual background (but not your bathroom, please) and include at least part of your body.

According to Mike, you should be doing an interesting activity in 20% of your profile pictures.

You should also include as many pictures as you can; if the website allows 10 pictures, upload 10. However, make sure to vary the settings and situations.

“About 80% of your pictures should be you looking amazing,” Mike explained. “The other 20%, you should be doing something interesting. You want it to be ‘Wow, this person is gorgeous,’ but you also want ‘Look at all the cool things we could do together!'”

When it comes to online dating, many of the most popular sites have worked to develop extensive compatibility software — take advantage of it! Mike said you’ll have a lot more success if you go after matches that have at least a 90% compatibility rate.

“My data has shown that if you go on a date with a 90% match or higher, then about 85% of the time you’re going to have a good conversation,” he said. “You may not fall in love, but if 85% of the time, you’re having great conversations on a date — you don’t really have to go on too many dates to find someone.”

3. Give Them a Chance

When you do find someone with whom you have great compatibility, give them a fighting chance. One of the biggest mistakes Mike has seen, particularly in women, is giving up on a potential match too soon.

“As a man — we get anxious, we do do stupid things; especially on a first date when we’re really nervous,” Mike said. Just because someone wasn’t a perfect date, doesn’t mean they aren’t a perfect match.

The key? Figure out what you really need out a relationship before you start looking, and learn to recognize those qualities when you see them. “If a guy has the things you need — if you have good conversation and compatibility — then give him a shot. Go on a second, third, even fourth date.”

As a professional dating coach, Mike, naturally, charges for his services; but he doesn’t want that to stop anyone from finding love. “I want to help everyone,” Mike said, describing his inspiration for creating the EZ Dating Coach blog.

A library of answers to questions on popular dating topics, the blog is available to everyone. “You don’t have to become my client. You don’t have to spend money on anything — you can get my advice for free.”

The videos and articles cover everything from how to keep someone from disappearing online, to when to initiate a sexual relationship with your new partner. Mike tries to update the blog regularly, with three to four new posts coming out each week.

Mike Can Help You Become Another Statistic (In the Best Way)

My roommate did, eventually, get over the end of her great romance. Unlike Mike, though, I’m not so sure she learned much from her experience — the current guy has an awful lot in common with the last. Looks like she could definitely use some of the EZ Dating Coach’s expert advice.

As for the future, Mike will continue to run his numbers, trying to improve his ability to help his clients; he’d like to increase his success rate even more, adding a few more positive numbers to his statistics. He also wants to broaden his data pool.

“I want to extend my reach; I want to be able to help even more people.” To do that, he’s designing a series of online dating courses, with the everyday dater in mind. “I realized I need to roll out some online content that is affordable for everyone.”

Of course, Mike realizes that’s easier said than done. “It’s going to be really challenging because I want to build it so that it really works. It’s not going to be one of those things, where I just give them the strategy and hope they follow it. I want to make sure they’re really going to be successful with it.”