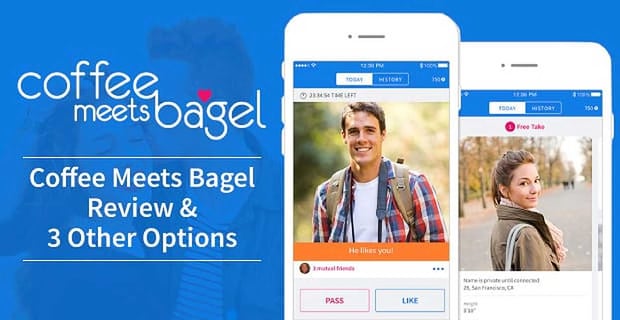 Coffee Meets Bagel Review & 3 Other Options to Think About

This Coffee Meets Bagel review can tell you everything you need to know about this dating app — from someone who has used it to get dates and find a relationship.

I’d been single for a long time when I created my Coffee Meets Bagel profile as part of a New Years resolution. I wanted to meet a good guy and was ready for a fresh start in the online dating world. I chose Coffee Meets Bagel as my go-to dating app because it’s not as complicated and overwhelming as some other more popular and casual dating apps. The app focuses on quality over quantity, and that appealed to me since I didn’t have much experience or confidence in meeting single guys online.

Once I joined Coffee Meets Bagel (CMB), I found it had all the swiping power I’d expect plus a good selection of genuine date prospects at my fingertips. This dating app review will go into detail about the matching experience, pricing, and membership base on Coffee Meets Bagel, and I’ll also recommend three similar dating apps that can help you expand your reach in the dating scene. Just in case Coffee Meets Bagel isn’t your cup of tea.

The year was 2012. Alabama beat LSU in the BCS National Championship, Adele won a Grammy for “Rolling in the Deep,” Barack Obama officially secured the Democratic presidential nomination, and Coffee Meets Bagel launched as one of the few female-led dating apps.

Three women in Silicon Valley came up with the idea of Coffee Meets Bagel because they were tired of being harassed and objectified by the male-dominated swiping scene. They wanted to create a safe haven for single women where respectful daters could slow down and just get to know each other.

CMB’s mission was to focus on quality over quantity and help singles meet their “everything bagel,” and the team still strives to accomplish that to this day. 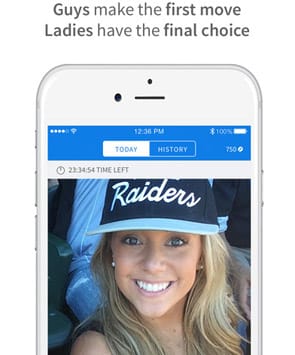 Coffee Meets Bagel was created in 2012 and is free on Google Play and the App Store.

Some key stats about the app: about 60% of members are female, 40% are male, 96% have a bachelor’s degree, 33% have a master’s, 70% are looking for a relationship, and 12% are looking for a hookup. In terms of success, Coffee Meets Bagel is responsible for 2.5 billion introductions and uniting 50,000 couples so far.

The app is available for free via iTunes and Google Play, and you must sign up through Facebook — as that’s how CMB verifies identities.

You’ll then input your sexual orientation, the preferred age, height, distance, ethnicity, religion, and sexual orientation of your matches (men, women, or both). You’ll also be asked to provide the name of the high school or college you attend or attended, three phrases to describe yourself, three activities you enjoy, three things you appreciate on a date, and three fun facts about yourself.

Coffee Meets Bagel has a unique matching system because it’s goal isn’t to give singles as many matches as possible but to give singles a selective list of the best matches possible. Each day, at precisely noon, the app will send you your bagels (aka matches). Men receive up to 21, and women receive up to five. As you’re browsing through your bagels, you can either like or pass on them.

Now, before you go thinking the number of bagels is unfair, CMB has its reason, and it’s called Ladies Choice. The team has found that women tend to be more selective in picking a date, so the bagels they receive are highly compatible and are on men who’ve already liked them — therefore saving them valuable time. Smart, right?

The Discover section is another way to meet bagels. These people won’t be in your daily batch because they don’t meet some or all of your criteria, but it’s a good thing to check out if you’re feeling adventurous and want to go beyond your type.

If you and a bagel like each other, communication is enabled, but only for a limited period of time. The option to chat with a mutual bagel will expire in eight days. This is one way Coffee Meets Bagel encourages its members to exchange numbers and meet up offline.

While the app doesn’t charge for registering, receiving bagels, and communicating, if you want to do things like see more information about a bagel or go back to someone you passed on, you’ll have to pay in the form of beans. You’ll start off with 10 and can earn more by logging in every day, inviting friends, and spreading the word on social. You can also purchase beans (100 for $1.99, 2,000 for $23, or 3000 for $24.99).

One of our favorite aspects of Coffee Meets Bagel is that you’ll find a lot of advice for filling out your profile, choosing bagels, messaging, and setting up a date, among others. The CMB team values feedback (e.g., why you passed on a bagel) and will work to make changes that will improve the experience. There’s also a Mirror Mirror Report, which tells you how good your profile is compared with those of others, and Reveal Report, which tells you why others liked you.

“Last night… I asked him, ‘Do you want to be my boyfriend?’ He said he would be proud to call me his girlfriend. I owe it all to CMB! Five amazing stars for making me the happiest and luckiest girl ever!” — Lincy H. said in a review on Yelp

Coffee Meets Bagel does have some cons, though. These include if you’re in a small town, you might receive fewer bagels or see the same ones, you may miss the fast pace of apps like Tinder, and since you’re getting matched up with friends of friends, you could come across some awkward situations (e.g., seeing exes or your friends’ siblings).

The reviews of CMB are mostly positive. On Yelp, Lincy H. gushed that, “We met on Sept. 7. We’ve literally seen each other every single day for the last 30 days. We pretty much acted like a couple from very early on. It’s official now. And I owe it all to CMB!”

However, we did find a few negative ones. David L., also a Yelp user, said, “I know for sure this app has messaging issues. On top of this, I don’t get notification of new messages, even though it’s on the app and on my device. The CMB concept is fine/unique, but they seem to be failing in their execution and user experience. These are two very important aspects of online dating apps — the integrity of communication and notifications.”

The final decision will ultimately be up to you.

Other Options to Think About

Coffee Meets Bagel is a fantastic dating app that’s doing wonders in a sea of cookie-cutter ones. However, it’s not the only choice you have. Below we’ve highlighted three apps that are also worth trying out.

Most of us know Match’s story: it was founded in 1995 before any other dating site and has created the most romantic connections ever since. Like CMB, Match can be downloaded from the App Store and Google Play. However, unlike CMB, Match allows you to search for dates on your own while also sending you suggestions.

You won’t have to pay anything to do this as well as to add your information and pictures, see who’s viewed your profile, and flirt (likes, winks, favorites, etc.). A free membership on Match also includes some communication options, but only paid members can send a message to anyone they like on the website and app.

Elite Singles is a fantastic alternative to Coffee Meets Bagel, especially if you’re a highly educated single who wants to date someone who’s also highly educated. Over 80% of users hold a bachelor’s, master’s, or doctorate degree (or some combo of all three). The success rate is something to brag about, too. More than 2,500 users find love on the app every month.

When you sign up for Elite Singles, you’re automatically given a free account that never expires. Create a profile, browse through singles, and start communicating to see if you like the app — you’ve got nothing to lose.

Zoosk is probably the most similar to Coffee Meets Bagel. It’s free, you can sign up via Facebook (as well as Google+), and most of its members are younger. Zoosk’s features are in the same realm as well — you can say yes, maybe, or no to suggested matches in the Carousel, and Zoosk Coins will give you access to more features such as virtual gifts.

Perhaps the biggest different between Zoosk and CMB is its size. The app has 38 million members and 30 million downloads, so if you’re in a smaller location, you might be better off going with Zoosk.

CMB: One of Several Prominent Dating Apps You’ll Be Happy With!

I have enjoyed meeting so many different people on Coffee Meets Bagel, and my favorite part of the app is that the process is streamlined to get singles from matching to chatting to dating in no time.

The CMB app doesn’t force me to wade into a large and overwhelming dating pool — it offers a small number of curated matches to review every day, and it maintains a friendly and safe atmosphere that puts single women like me at ease.

If you’re single and ready for a fresh start, CMB should be a go-to dating app because it’s free, safe, easy, and effective. But why limit yourself to one dating app? Most online daters use two or three apps at once to up their odds of meeting a special person. With so many awesome (not to mention free) dating platforms out there, you might as well give several dating sites and apps a test drive while you’re at it. Cheers!

Is Match.com Worth It? — 6 Reasons to Try

“Can You Fall in Love Online?” — (5 Real Stories That Prove It Can Happen)