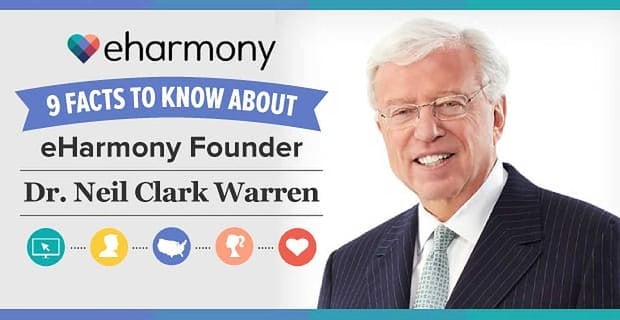 In addition to being a Christian theologian and a clinical psychologist, Dr. Neil Clark Warren is the founder of eharmony. You may recognize him as the white-haired spokesperson seen in classic eharmony commercials. In the early 2000s, he campaigned heavily on behalf of his relationship-oriented dating site, telling people it would change their lives by introducing them to their soul mates.

Neil’s vision has transformed online dating and created a serious space where singles can fall for one another.

There’s more to know about Neil than what we’ve seen on TV or online, so we’ve compiled a list of nine fun facts you should know about the founder of eharmony.

Neil was born in Des Moines, Iowa, on Sept. 18, 1934 — a year when the Great Depression was at its worst, Bonnie and Clyde were shot and killed by the FBI, and Donald Duck appeared for the first time in a cartoon. Neil was raised on a farm, and his father once owned a Chevrolet agency, a John Deere store, and a grocery store. He also ran for supervisor of Polk County.

Neil became interested in romantic compatibility as a young man while watching his parents interact. They were married for 70 years, but he saw how they struggled to communicate with each other. While his father talked about things like the conflict between Jews and Arabs, he said his mother “didn’t know where the Middle East was” and he spent his childhood “sitting there with two people who never talked. I was bored to death growing up.”

“They had a nice marriage, but they were not a very well-matched couple. My dad was just so stinking bright, and my mom was so sweet, but she was two standard deviations below him in intelligence,” he said in an interview with Salon.

2. He Has Degrees From Pepperdine University, Princeton, and the University of Chicago

The inner workings of intimate relationships was more than just a passion to Neil, and he went to the highest level to learn as much as he could about the topic.

He earned a bachelor’s degree from Pepperdine University in 1956, a Master of Divinity degree from Princeton Theological Seminary in 1959, and a PhD in clinical psychology from the University of Chicago in 1967.

After he finished school, Neil worked as a professor in Chicago, and then he moved to Pasadena, California, where he was dean of Fuller Theological Seminary’s Graduate School of Psychology. He had a private practice where he counseled couples, many of whom were on the brink of divorce, and focused on their marriage compatibility.

Neil married Marylyn Mann on March 22, 1959. Today, they have three daughters and nine grandchildren, and they live in Southern California.

“Marylyn was born in Boston. I was born in Iowa. I was the only kid in my class. Marylyn was from a big school,” Neil said to CBS News. “She moved all over the East Coast. I think she’s the most adaptable person in history of the whole world.”

Not only has Marylyn been by Neil’s side for 60 years, but, for more than 18 years, she’s also been one of the key people behind eharmony. She’s the Vice President of Corporate Solutions, and she often works with the site’s PR team. When she’s not at eharmony, Marylyn is a Regent at Pepperdine University.

Before taking on her role at eharmony, Marylyn was Vice President and Chief Fundraiser of The Henry Huntington Library.

Around 1995, Neil found that he wanted to help more people besides those he was seeing in his private practice, so he and Greg Forgatch, his son-in-law, started Neil Clark Warren & Associates. This company hosted seminars and offered relationship advice based on Neil’s 1993 book “Finding the Love of Your Life.” Seven years later, they decided to take more proactive steps to improve relationships, and that’s where eharmony’s story begins.

“We came to the conclusion that single people in America do not want more education about relationships,” Neil said in the Salon interview. “They’re sick of that. They want somebody.”

5. He Officially Launched eharmony in 2000

Neil and Greg’s mission was to pair singles with their true lifelong partners and help prevent more breakups — as the divorce rate at the time was 4 per 1,000 of the population. They also saw the incredible potential of online dating, so, using Neil’s research, books, and life experiences, they started eharmony in 2000. This was the first dating site that matched singles based on a number of compatibility factors.

Below are more details about the site’s features, pricing, and user base:

Today, 71% of women and 69% of men meet their future spouses on eharmony within a year, and the site has over 33 million members, creates over 15 million matches a day, and is responsible for inspiring countless relationships and marriages. For more information about eharmony’s success rate, check out this article.

6. The Site’s 29 Dimensions of Compatibility Questionnaire Was Mostly Created By Neil

The eharmony signup process is famously time-consuming, but it can be completed quickly if you know yourself and know how to write a stellar profile. It includes dozens of persona questions and takes about 25-45 minutes to complete if you answer them all (which you should).

While the 29 Dimensions of Compatibility Questionnaire does ask for identifiers like gender, relationship status, location, ethnicity, religion, and income, it goes way beyond that. To find your perfect match, eharmony also wants to know what you’re passionate about, how you would describe yourself, how you think friends and family would describe you, what your skills are, and how strongly you agree or disagree with certain statements, among other things. You can learn more about the specific questions eharmony asks here.

When it was founded, eharmony was strictly for heterosexual men and women, which has caused some controversy over the years. The company was sued in 2005 for discrimination against same-sex couples. The team was able to settle the lawsuit by creating CompatiblePartners.net in 2009.

“We didn’t want to pretend to be experts on gay and lesbian couples,” Neil told CNN. “We’re not anti-gay at all… it’s a different match.”

Over the years, Compatible Partners saw its own success independent of its sister site, receiving more than 370,000 visitors a month and facilitating “a number of same-sex marriages,” according to Neil. But it has since merged with eharmony.

Today, eharmony has opened its doors to LGBTQ+ singles, creating same-sex matches in the same way it creates opposite-sex matches — because it turns out love is love.

After decades of counseling work and seven years with eharmony, Neil retired in 2007, when he moved to Kennebunkport, Maine, with his wife. He returned in 2012 to help put some new life into the company.

When he came back on board, he hired a new chief financial officer, chief technology officer, chief operating officer, and head of public relations, and switched advertising firms. But his main mission was to make eharmony more of a general relationship site (instead of just a marriage site), helping people find loving connections in all shapes and forms.

“We’d gotten a bit lost,” he said during a Los Angeles Times interview. “Things were going backward, and we weren’t doing nearly as well as we were doing before.”

Neil stepped down again in 2016, and Vice President of Brand Marketing, Grant Langston, who’s been with the company since 2000, took over. Neil still remains Chairman of the Board of Directors.

In addition to hundreds of counseling sessions and the immeasurable work he’s done with eharmony, Neil has authored 10 books, has been interviewed more than 7,000 times, and has written dozens of articles for publications like The Huffington Post.

Neil’s writing and research has received mostly positive reviews over the past couple of decades, including one from Amazon user named Lindsey, who said: “Reading this for marriage guidance. So far it’s helped a lot! Eight years of marriage and we’ve not really had a common goal/vision to work toward/dream together about. This book has refreshed our communication!”

While Dr. Neil Clark Warren has been out of the spotlight for a while, his impact remains. eharmony is still beloved by millions of singles and couples, and the team continues to adapt the platform and its features as the needs and wants of users change. We hope we’ve given you some more insight into the past, present, and future of eharmony and the people behind the eharmony site!

Is BeNaughty Legit? 7 Things You Need to Know