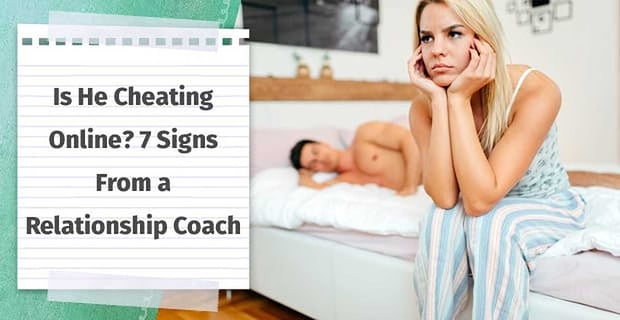 Is He Cheating Online? 7 Signs From a Relationship Coach

Cheating is bad — let’s just say that right off the bat. It’s a betrayal of trust and is never healthy in a relationship. If we’re talking about online activity, though, sometimes it’s hard to tell what’s considered cheating. Is sexting cheating? Is having a subscription to a cam girl site cheating? Is it cheating to be talking to your ex and lying about it? All debatable.

We don’t want to necessarily get into the gray area of what is or is not cheating online. However, we want to highlight some online and technological behaviors that most likely indicate something unsavory is going on. If any of these red flags describe your significant other, you might want to start taking more notice.

More online interactions are requiring passwords for access, which means we’re increasingly saving our passwords on our personal devices. If you use your beau’s laptop, his email login info is probably saved in his cookies. This doesn’t mean it ever gives you the right to snoop. However, if suddenly, all sites he uses no longer have the passwords saved, it’s odd.

If he used to have his passwords saved on his accounts, especially ones you share, and they’re no longer saved, it could be cause for an eyebrow raise.

And if you’re long-time partners, you may know each other’s passwords when you need access to accounts. If you type in his longtime password, and it’s not working anymore, and he hasn’t said anything, it should raise an alarm.

Why is there a sudden need to get secretive? Ask him about it nonchalantly, “Hey, I needed to grab a doc from your Google account but couldn’t get the password to work. Did you change it?” Watch his reaction. If he suddenly seems defensive or panicky, you might have a problem on your hands.

2. His Internet History is Blank

I forget things I looked up all the time. Many times I need to go into my browser history to find a site or page I can’t remember. Every time I do, it’s like taking a somewhat embarrassing trip down memory lane. “Ah, yes, I forgot I Googled itchy butt remedies…” But the history is there.

If you’re using your lad’s computer and notice his internet history is totally blank, there’s something being hidden. These days, with all the access we have, we’re very forgiving of each other’s predilections. So he likes Latina MILFs? Good for him.

We don’t all take the time to erase our browser history, but if his is empty, he could be cheating. Or he could just be embarrassed about what he’s been looking at (e.g. itchy butt remedies).

When there’s nothing, that’s a big red flag. Either he’s doing extremely dubious things online or is trying to cover his cheating tracks. Neither option is good.

But before you freak out, maybe he’s horribly embarrassed that he has a shoe fetish. As usual, the best way is to ask in a non-confrontational way why it’s blank and give him space to talk to you. You’ll gauge a lot by his next couple sentences.

3. He Never Leaves His Phone Alone

I’m tethered to my phone, I admit it. Granted, as someone without a traditional office, this is where all my business comes in, so I’m always checking it. I’ll take it with me into the kitchen just to grab a glass of water. If I can’t find it for an hour, I’ll start freaking out, so I understand being attached to your phone and wanting it around.

But there’s a difference between that and NEVER letting it alone. Usually, when my wife and I are watching TV or eating dinner, our phones are resting nearby. And we use each other’s phones as a quick proxy if we can’t find our own. If suddenly her phone was never sitting around, if she “needed” it when I asked to borrow it, and if she started to always carry it with her, there would definitely be room for suspicion.

We’re all addicted to our phones, but when he’s not willing to leave it alone or let you use it, nonchalantly ask him why.

Also, if his phone habits change drastically, be mindful. If he receives an incoming message and goes to the next room to answer it or hides the screen from you, it’s definitely grounds for concern. Ask him to let you use his phone for a specific reason. “Can I see your phone for a sec? I want to look for a pic you took a while ago.” If he demurs and keeps demurring, keep your eyes open going forward.

4. He’s Always on the Computer

Is he on the computer all the time at odd hours? Granted, if he’s part of a raiding party in WoW with his Euro buds, he might need to hop on his console at an ungodly time. But at least you know what he’s doing and why.

If you wake up in the middle of the night and see he’s not in bed and hear clicking from the den, this is unusual behavior. If he needs to keep “checking on something” by leaving the room and going onto the computer, start paying attention. Yes, maybe he’s checking his eBay bid on the limited edition Star Wars shirt, but he should be sharing these things with you, not hiding them.

Being on the computer all the time isn’t necessarily a problem, but he shouldn’t be avoiding telling you what he’s doing.

Any action that starts to impact you and your relationship can be damaging. Your gut may be telling you something is wrong, if you have an emotionally distant partner who seems to value his computer time over time with you. Time to update your Match profile…

5. He Quickly Puts Phone Away or Switches Screens Around You

On the heels of the last two, this sign adds even more fuel to the cheating flame.

Let’s say you enter a room when he’s on the computer, you notice him notice you, and he furtively hits the keyboard quickly. When you get to see the screen, it seems like an innocuous website, but you notice it’s at the top of the page and not mid-scroll. Or maybe it’s a doc open with very little info on it and a blinking cursor. If he was just typing something on the keyboard, where’s the text?

When you walk into the room, is there always a blank screen up, or does he always stuff his phone in his pocket? Maybe there’s nothing going on, but maybe there is. Photo source: Limecuda.com.

Remember, nothing is an absolute smoking gun, but all of these raise serious questions that you’ll need answers to. If it’s not near your birthday, anniversary, or any other possibly important holiday, it’s totally within your rights to ask him what he was looking at.

6. You Notice He Follows a Lot of Hotties Online. Like, a LOT.

You’re looking at his Facebook page, Instagram feed, or some other site and notice he’s following or is friends with a lot of hot young women. He’s liking sexy or provocative posts, he comments very specific things, or is on r/gonewild on Reddit. While this doesn’t necessarily constitute cheating on its own, it shows you where his mind is at.

It’s definitely OK to have female friends online, but are most of them or all of them women? Is he leaving flirty comments that are too close to the line?

If he constantly has to interact with other women, or if he’s looking at them when he should be looking at you, something isn’t right. If anything, this shows a lack of decorum and manners for your emotions. Something drastic may have changed for him, especially if this suddenly appears out of the blue.

Maybe he’s decided to break up with you and is seeing what’s out there. Maybe he cheated and now doesn’t respect the union anymore. As with many of the above examples, broach this subject in a way that he doesn’t feel attacked. “Hey Steveington, I noticed you’ve commented or reached out to a lot of women online. I don’t really feel comfortable with that. Is everything OK?” Just understand, you might not like the answer.

7. He Accuses You of Online Cheating

Liars always think everyone is lying. It’s called projecting, and it’s a pretty easy tell to spot. Many times a cheater projects his own cheating onto his spouse or girlfriend and becomes suspicious and distrusting. Previously in your relationship, he never minded when you talked to your old high school friends or exes. You would have fun text conversations with your guy friends or work buddies on your phone, and it was no big deal.

Usually the one pointing fingers and blaming others is the one with the guilty conscience, so keep an eye out if he’s accusing you of cheating online.

Now, abruptly, his actions have changed. Now he wants to know who the guy commenting on your photo is. He wants to know who it is every time a text comes into your phone. Maybe he even demands that you unfriend or unfollow someone.

What happens when someone cheats is the covenant of your relationship has been broken. In his mind, it’s already broken, so now all of these crazy possibilities start entering his mind. Also, it can be a way to psychologically assuage his guilt and justify his actions. “It’s not so bad that I’m cheating because she’s totally cheating on me, too!”

Calmly ask him where this newfound jealousy comes from and why he suddenly has a problem with you talking to old friends. If he’s evasive or can’t really give you a good answer, cheating might be a reason.

These Aren’t Hard-and-Fast Rules, But Keep Them in Mind

This is kind of a list of warning signs that you might be an alcoholic. One check mark doesn’t necessarily mean he’s cheating — though, it’s possible. When you start checking off three, four, or five boxes on the list, then it’s more and more likely that something’s going on.

I know sometimes it’s easy to just put your head down and pretend nothing is happening, but that isn’t going to do you any good. It’s just wasting more of your precious time that should be going to someone who loves and respects you.

Also, don’t use these tips as an excuse to go snooping or unleash the beast on him. Try and communicate like evolved people. If that doesn’t work, there are many ways to get more information. Just understand that you’re also breaking the covenant of trust in your relationship. And if nothing is up and he finds out you were spying on him, you’re the asshole now.