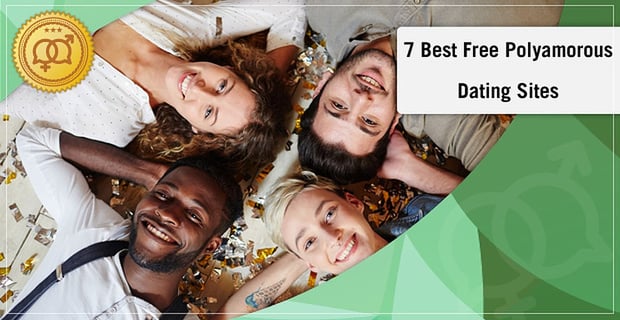 7 Best Polyamorous Dating Sites (That Are Free to Try)

Merriam-Webster defines polyamory as, “the state or practice of having more than one open romantic relationship at a time.” According to The Advocate, 4% to 5% of Americans participate in some form of consensual non-monogamy.

According to survey results published by The Advocate, 49.5% of polyamorous people identify as female, 35.4% as male, and 15.1% either decline to choose or identify as another gender (e.g., genderqueer). Despite a 2015 Gallup poll that shows a growing tolerance for relationships and situations outside the bounds of traditional monogamous marriage, 25.8% of polyamorous people responding to a survey by a polyamory advocacy organization said they’ve experienced discrimination because of their lifestyle.

We believe people have the right to love who they want in any way they want as long as it’s consensual, it’s not hurting anyone, and it’s not breaking a law. If you and your partner are looking to share your love with another, check out the top seven free polyamorous dating sites below.

Match isn’t a polyamory-specific dating site, but it’s one of the best options because of its size (40 million+ users), history (founded in 1995), and success rate (more dates, relationships, and marriages than any other dating site). Not to mention you won’t have to pay to sign up, create a profile, upload photos, browse, receive matches, flirt in a variety of ways, and attend events, among other things.

Whether you’re looking for a third, fourth, or numerous partners, BeNaughty has your back. The site has millions of users who are interested in polyamory, open relationships, swinging, and other alternative lifestyles. Just specify what you want in your profile, and begin browsing for free. BeNaughty is a global dating site, so you shouldn’t have to try very hard to find compatible matches.

With more than 65 million users, Ashley Madison has a vast and diverse membership that’s made up of singles and couples looking for polyamorous relationships, affairs, threesomes, and more. For men, it’s free to sign up, create a profile, receive messages, and flirt in a variety of ways. For women, absolutely everything is free. Ashley Madison also provides a button at the top of your screen that you can click if you want to quickly be redirected away from the site.

Polyamory Date describes itself as “a community for real poly adventures,” whether you’re interested in hookups, dates, or relationships. After you create a free profile, you can upload videos, view other members’ videos, chat privately or in groups, and read blog posts with advice about polyamorous dating. Polyamory Date is particularly proud of its Anonymous Messaging System, which allows you to remain discreet until you’re ready to reveal information about yourself.

OpenMinded provides a fun, secure, judgment-free space where millions of polyamorous singles and couples can connect, and it’s free to sign up for and use. It was founded around 2014 by Brandon Wade, who also founded the affair dating site Seeking Arrangement. Some of the coolest features include private photo sharing and messaging, Favorites lists, and invitations to exclusive OpenMinded parties.

No matter your relationship status, gender, sexual orientation, ethnicity, location, religion, or background, BeyondTwo welcomes you with open arms. Plus, you won’t have to spend any money to register, browse, and flirt. According to the site, “By encouraging poly individuals to become involved in BeyondTwo and feel welcome to meet, solve problems, and discuss issues that they feel are important, we feel that this will empower the community worldwide as a whole.”

Not only is Polyamorous Passions a popular dating site, but it’s also a popular social network. Every day, millions of polyamorous people make friends, find casual dates, and meet that special someone. You could be another success story — all you have to do is give the site your name, age, city, relationship status, gender, and match preferences. Polyamorous Passions is 100% free, and the team says it will keep the site that way for as long as it’s around.

As They Say, The More The Merrier!

The Advocate reports that Gallup polls taken from 2001 to 2015 reveal a 15% increase among those who view sex between an unmarried man and unmarried woman as acceptable, a 16% increase in the acceptability of having a baby out of wedlock, and a 16% increase in the acceptability of polygamy. Our experts believe all of this contributes to a growing acceptance of polyamory. Our experts also believe the seven sites on this list are playing a major role. Good luck!