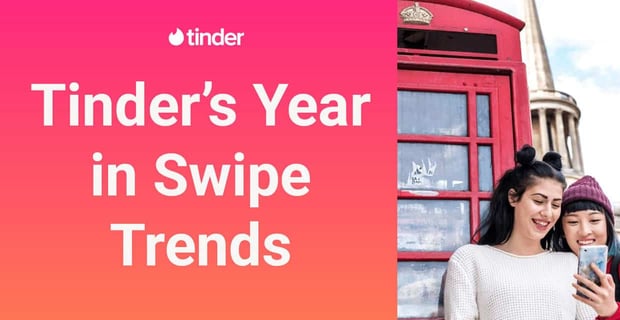 The Short Version: Tinder’s “Year in Swipe” shares user dating trends from 2022, and it tells a story of more intentional daters. Singles normalized “situationships” this year, with many saying they prefer casual relationships over serious ones. Tinder users also came up with creative ways to date, often avoiding alcohol. More than anything, modern singles have prioritized shared values and social politics when choosing a partner.

The last few years have been a strange time for dating. The dating lives of singles have been a reflection of surging and declining COVID-19 numbers. Many singles gave up on dating altogether, not wanting to risk COVID-19 exposure by meeting a stranger on a date. Those who continued to date found creative ways to meet new people while keeping themselves and their families safe, often going on socially distanced dates or, in some cases, even wearing masks during sexual activity.

In 2022, however, increasing vaccination rates, declining infections and deaths, and a generally relaxing public attitude led many singles to return to the dating world in full force. Tinder’s 2022 “Year in Swipe” dating data shows that singles are back on the apps and meeting up in growing numbers. However, the dating habits and mindsets of young singles — primarily members of my generation, Gen Z — have been different from what’s been seen in the past.

2022 saw a rise in singles breaking away from the traditional approach to dating and relationships. Young singles started accepting relationships that defied concrete categories of commitment. They started having big conversations — religion, politics, ethics — early in their relationships, frequently putting their affiliations on their dating profiles. Even the activities they participated in on dates started to change.

While Tinder’s “Year in Swipe” data shows interesting and sweeping trends in the dating game, it gave little information about how these trends varied by demographics. The ways that different age groups, sexualities, and genders changed their dating behaviors in 2022 are largely left out of the report, despite the emphasis on young singles. It’s unclear whether the changes in modern dating are championed by all or affect all demographics equally.

The Rise of the Situationship

One of the most noteworthy dating shifts in 2022 was the growing presence and acceptability of the situationship. Described by Tinder as a “casual — yet clearly defined — relationship,” the situationship became an astonishing 49% more popular in Tinder bios in 2022. According to Tinder, the situationship provides young singles an avenue to explore a future relationship with less pressure and expectation.

It’s no secret that young people now accept a non-linear path to a committed relationship. Hookup culture has been around for years, and dating casually is a common part of young adulthood. But the rise of situationships is a new component to the dating world. Now, it’s common to share all of the joys and experiences of a relationship without a clear commitment to one’s partner. While that certainly has its benefits, it can also lead to partners falling for each other and then rapidly getting hurt. In many cases, situationships hurt women the most.

“Like its predecessor the friends-with-benefits, no-strings-attached fling, the situationship vaguely resembles a relationship, but with none of the commitment,” Brooke Kato writes for the New York Post. “It’s a tactic men use to keep a steady hook-up without the adult responsibility of having a partner. When confronted, a situationship-loving guy will simply respond that he’s just not ready for a relationship.”

Even if Tinder users are cagey about commitment, they’re not afraid to call out toxic dating behaviors. Tinder reported an increase in both the red flag and gaslighting emojis, with 58% of young singles saying that they could confidently identify green and red flags while dating. If wanting a situationship is a red flag for women using Tinder, hopefully, they can trust their gut.

Dates are Changing (Perhaps, for the Better)

Relationship status is by no means the only thing becoming less traditional. The pandemic saw a rise in creative date ideas, with many young people finding unique ways to spend time with a date in a safe, socially distanced manner. Many restaurants were closed or only open for takeout, making the traditional dinner date nearly impossible during the lockdown. Singles started going on picnics, hikes, or other outdoor activities for dates.

While young people are far more comfortable being indoors for their dates now, 2022 still saw a continuation of outside-the-box first-date ideas. Mentions of “picnics,” “mini-golf,” and “drive-ins” all increased in frequency in Tinder bios as more people steered away from sitting through an expensive meal or boring coffee date. Instead, modern singles are prioritizing activities they actually find fun. As singles continue to date casually, they move toward including dates in activities that are already a part of their lives instead of keeping date activities totally separate.

Second only to the dinner date, grabbing drinks used to be one of the most common ways to get to know someone on a first date. You would get a beer or cocktail at a bar, hoping that some light intoxication would dull your nerves. In 2022, it seemed that young people were leaving drinks in the past as the desired date, opting instead for sober activities. A massive 72% of Tinder members said they don’t drink or only drink occasionally on their profiles, while 25% said they drank less this year on dates than they did the year before.

It seems that young singles on Tinder are moving toward sober dating and relying less on alcohol to help them have a good time.

Overall, Tinder’s 2022 data shows singles dating on their own terms and prioritizing the parts of relationships that are important to them. It’s no surprise, then, that singles focus on values when they choose potential partners. When they were asked to name the most important traits in a potential partner, Tinder reported that 79% of singles surveyed said loyalty, 78% said respect, and only 56% said looks. Whether these priorities are true in practice remains a mystery, but young singles have the best of intentions when choosing a partner.

Singles’ values don’t stop at the conceptual, either. In 2022, Tinder users were asking tough questions early on in a relationship. In particular, they focused on social issues, with 75% of singles saying they “were looking for a match who is respectful of or invested in social issues.” So many Tinder users added the Ukrainian flag to their bios in 2022 that, at one point, it was one of the top trending emojis.

In the United States, the increasing tension and discourse surrounding the midterm elections led to an increased emphasis on voting as an important factor in whether or not a potential partner was a viable match. According to Tinder, “47% (of young singles) say finding out the person they’re dating is a non-voter would be a dealbreaker.” With only 27% of 18-to29-year-olds voting in the midterms, that rules out a lot of potential matches. All the more reason why young people include this information in their bios and rule out incompatible dates early on.

A lot changed for singles in 2022, but the Tinder report shows that young people are figuring out how to identify compatibility with a potential partner quickly instead of sticking with someone for years before learning they have different politics or even hobbies.

The report is in: Gen Z is redefining romance for the future.

Should You Make Your Profile Universally Appealing?