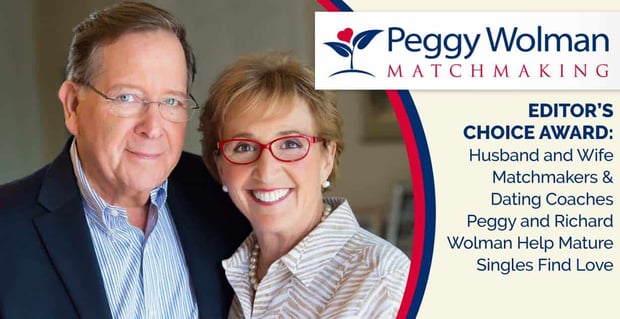 The Short Version: For divorced and widowed adults, the modern dating scene can seem very different from the one they remember from years ago. Matchmakers and dating coaches Peggy and Richard Wolman want to demystify the process and teach them how to thrive in today’s scene. The husband and wife team use their years of experience in counseling and psychology to help clients regain confidence in themselves and understand what they want in a relationship. For their dedication to helping mature singles achieve results, Peggy and Richard Wolman earn our Editor’s Choice Award.

Peggy and Richard Wolman have been married for more than 50 years and use their experience as both partners and psychologists to help mature singles find love. They accomplish that as matchmakers and dating coaches at Peggy Wolman Matchmaking.

One of the firm’s recent clients, a woman in her early 60s, found herself sad when thinking about a friend’s wedding. The friend, another older woman, had found a great partner later in life, and, though, the Wolmans’ client was happy for her friend, she wanted a partner of her own.

“She was looking but hadn’t found anyone, and she was feeling a little jealous,” Peggy told us.

As dating coaches, the Wolmans encouraged their client to make a toast at her friend’s wedding, and talk about how she wanted a husband who was as great as her friend’s. One of the Wolmans’ key beliefs is that singles need to put themselves out there and be honest about their quests for love.

After the toast, a gentleman who was moved by her message told her that he had a cousin he’d like her to meet. She agreed to meet his cousin, and a few weeks later, they hit it off. Eventually, they built a lasting relationship — the same kind of partnership the woman had mentioned in her speech.

Many Peggy Wolman Matchmaking clients have similar stories. They are typically adults ranging from their 50s to their 70s. Most are successful in their professional lives but haven’t had that same fortune in finding a partner in their later years. Some are divorced or widowed, while others have never been married.

“We’re pretty unique in catering to older adults, but they’re a large demographic everywhere. We offer the perspective of being older adults, so we can identify with the process of finding love again,” Peggy said.

Richard added that their work is also satisfying on a personal level.

“When you help someone who is in their 70s meet someone and get married, it’s very gratifying and inspiring,” he said.

Catering to a Sophisticated Clientele

Peggy and Richard work with people all over the country, though most of their clients live on the East Coast. The New England-based couple started working with more New York singles after receiving a glowing review from The New York Times. Now with technology like Zoom and Skype, they’ve also found international clients, many in the U.K.

During their time as dating coaches, they’ve noticed that there are so many wonderful, successful, and kind mature singles in the world.

Some clients of the Wolmans don’t have partners because they haven’t had time to search. Modern men and women have so many other obligations that they may not have time to devote to building a relationship — let alone finding a partner.

Many of the Wolmans’ clients don’t have time to search for compatible partners.

“That becomes a big issue — ‘How would a partner fit into your life?’” Peggy said she asks her clients.

Other times, the Wolmans’ sophisticated, high-profile clientele are nervous about online dating, so the pair offers them the support they need.

The Wolmans also work with clients who aren’t sure that they can find love again. With many elements of popular culture depicting love, romance, and marriage as something for young people, some mature singles believe they’ve missed out on the opportunity. According to Peggy, the most critical factor in coaching those clients is changing their minds.

“In the end, we want the singles we work with to feel like we are guiding them to a better place in their lives,” Peggy told us. “Everyone is looking for a nurturing, caring partner.”

According to Richard, the U.S. is home to 110 million singles — or about one-third of the population — and about 41 million of those singles are looking for love online. That means singles of any age can’t ignore online dating platforms.

But many of the Wolmans’ clients haven’t dated for years, so they’re unsure about navigating this new landscape. Others have used online dating platforms before turning to the Wolmans but were put off by their experiences.

“A lot of our clients don’t know how to date in 2020. If you haven’t dated for 30 years, the scene has really changed. There are ways to keep yourself from getting hurt,” Richard said.

Some singles struggle because of their lackluster online profiles. They may not choose flattering photos, or they aren’t writing compelling personal descriptions.

“We help them stand out from the crowd,” Richard said.

At the same time, clients can complete activities that help them identify their strengths and describe what they’re seeking in a partner.

A 64-year-old Manhattan woman who thought that she would never find love again describes how the Wolmans helped her.

“Peggy and Richard gave me hope,” she wrote in an online testimonial. “But in addition to hope, they helped me craft an incredibly beautiful profile that truly explained the kind of person I am, and the sort of person I was looking for in a love interest. The professional photographer they suggested for my photos was excellent. Richard reviewed the online profiles of the men for me, and he found someone I probably would not have found on my own.”

Peggy and Richard’s own five-decade-long relationship and their backgrounds in psychology have been instrumental in their success as dating coaches and matchmakers.

Even their first meeting more than 50 years ago was pure luck: They were randomly seated next to each other on a plane. They hit it off so well that Richard called Peggy a day after they met and invited her out for coffee. On their second date, they went to the ballet. A year later, they were married.

Over the decades, they had four children, all of whom are now married and have families of their own.

“Finding the love of your life combines strategy, thoughtful gestures, faux pas, flirting, and luck, just to name a few variables. Most of all, meeting and falling in love is about being open to new possibilities so that the chemistry — the magic — can happen,” Peggy wrote about her own love story.

Though their longtime romance gives them the personal experience to discuss how to build a lasting partnership, Peggy and Richard also have professional backgrounds in psychology. Peggy holds a master’s degree in social work, while Richard has a Ph.D. in psychology and is a faculty member at Harvard Medical School.

The Wolmans work hard to help their clients recognize that they deserve love, even if many of them seek help because they feel they will never date again. They strive to help clients change the attitudes that keep them from seeing the possibilities.

“We show them how to get back into the world of dating and feeling better about themselves. They become active participants in their journey to find someone special. If you’ve been alone for a long time, that’s a step in the right direction,” Peggy said.