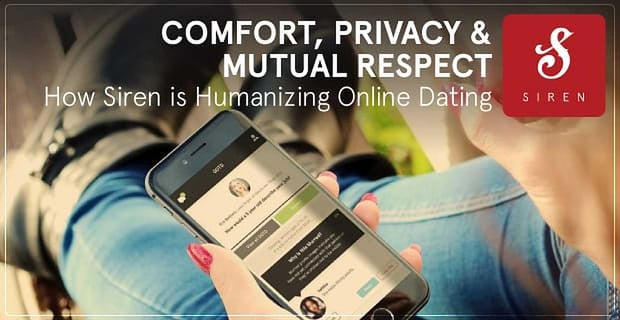 The Short Version: Socially evolved Siren is transforming the dating app space with its inclusive attitude, relatable Question of the Day, and customizable privacy features. On Siren, it’s all about connecting you with great people through genuine conversation — not addictive and mindless swiping. To that end, they’ve created a fun and secure environment where you can be your real self and let romantic chemistry with a match unfold in a more organic way — just like it would happen in person.

With their sleek interfaces, fun features, and hand-held formats, dating apps have revolutionized the way people date. And while it seems easier than ever to meet somebody special, the acts of swiping and liking or disliking people based on photos has almost made dating a game — and created a disconnect among the people playing it.

Siren is a safe, inclusive, and popular dating app.

For those who want to combine the convenience of a dating app and the feeling of connecting with someone in real life, there’s Siren — a unique online platform that eliminates the “shopping for humans” model many other dating apps have adopted.

Thanks to its Question of the Day matching system, Siren sets up the context for discussing engaging topics (like bucket list items and philosophical questions) and pairs people through those authentic and entertaining conversations. This way, true personalities can be revealed naturally — exactly as they would in person.

For more on the inspiration behind Siren, its special features, and the women-led team behind the app, we spoke with Co-Founder and CEO Susie Lee.

A Pro-People Perspective: Siren Was Created With Everyone in Mind

Siren was founded by two women with a feminist perspective — Susie and her Co-Founder/COO/CMO Katrina Hess — who both wanted a dating app that was created with mutual respect, privacy, and comfort as top priorities.

Having gone through some terrible dating experiences via other dating apps, Susie and Katrina saw they weren’t really built with women and their particular needs and desires in mind. Plus the negative nature of swiping left and right on people was demeaning and didn’t help form quality connections, especially for women.

“I just felt this immediate sensation that, as a woman, I was objectified. The swipe-to-reject format didn’t work for me,” Susie said. “I looked back on the relationships I had before, and I never met people through these kinds of methods.”

Even though they had never built a dating app, Susie and Katrina knew they could make one that was not only female-friendly, but fun and compassionate toward everyone.

They took their time researching the tech space and getting feedback from friends and experts before and during development. And they ignored people who said men wouldn’t use a dating app that was focused on women and gave them advanced privacy settings.

Siren was launched in 2014, and soon it wasn’t just Susie’s and Katrina’s friends who were using Siren. It was friends of friends and total strangers — including men — who were using the app and expressing gratitude for it. Word spread and Siren has been a leading, inclusive dating app ever since.

And even though Siren is pro-women, there’s not an anti-men vibe to it at all. It’s proof that a dating app designed by women for women can successfully work for them as well as for men.

Safe & Welcoming Atmosphere Sets a Positive Tone for the Community

The folks at Siren have always been very protective of their members, and, as the creators, they knew they could set a positive tone for the whole community by putting safety measures in place and creating a welcoming atmosphere.

While on other dating apps people might experience harassment or catfishing, that’s never been the case for the people on Siren, and the initiative of the Siren team is the reason for that.

The overall tone at Siren is one of fun, honesty, and mutual respect.

“Since we launched, we’ve had zero reports of harassing messages,” Susie said. “Authenticity and people being able to feel like there are real people on the other side is absolutely important to us. We were really careful about growing the community with a certain kind of reputation.”

Susie added that she and her team believe people are fundamentally good and that if they’re given a safe, friendly environment, they’re going to be kind and honest with one another.

“We can give you these icebreakers and these ways to be a little more vulnerable and a little more real, and that’s how people can connect,” she said.

Siren’s Mantra: “Make Strangers Less Strange to Each Other”

With the social media most of us use, like Facebook, the connection is already built in with the people we follow and who follow us, so interacting is comfortable and easy. Siren’s conversation-style system replicates that for online dating, helping you initiate those interactions without any awkwardness.

“When you’re dealing with a total stranger in the online dating space, there’s a lot of reservation about how much you trust this person, especially because a lot of sites are really complicated and have a lot of fake profiles,” Susie said. “My mantra that I always tell my team, and they’ve really embodied this, is to help ‘make strangers less strange to each other.'”

While Siren does offer the classic features of online dating (including messaging and blocking capabilities), their Question of the Day is the feature that makes them stand out from other dating apps the most.

Siren is unique in that they match singles based on their answers to the Question of the Day.

With fun questions like “If you could have access to a billboard, what would you want it to say?” you’re able to be yourself and get to know someone on a more genuine level. You can even search for matches based on their answers to those questions as well as by your preferred criteria like age, gender, and location.

And with this level of communication, you don’t feel the need to inflate qualities like your income or physical appearance to sound more appealing to others.

Siren even has a unique approach to photos. You have the option to keep your photos blurred and only visible to your connections, or you can leave your photos visible to everyone.

“To make it comfortable and safe for people to be able to navigate their professional and private lives, we allow everyone to control their photo visibility,” Susie said.

Privacy is important to Siren, so you can keep your photos blurred until you make a connection.

Unlike the average dating app, members can’t send each other photos, which was intentional when Susie and Katrina developed the app. She said this encourages members to give each other their phone numbers and move the connection offline — and protects people from receiving unwanted pictures.

And no matter which photo option you choose, the great thing is Siren’s Question of the Day — and members’ answers — allows you to connect with people on a deeper level than just looks.

Safely Connect With Others Thanks to Siren’s Privacy Controls

Another big component of Siren is safety, especially in terms of preventing scammers. Everyone who signs up must put in their phone number and enter the activation code they receive via text, which ensures people aren’t creating multiple accounts.

Members can also block and report to the Siren team other members who are behaving inappropriately or abusing the app’s terms and conditions.

Discounted Events Get You Offline & Give You New Date Ideas

Besides creating a comfortable and safe online place for people to be who they really are and giving them a unique way to start conversations, Siren is also taking the next step by hosting offsite events. Susie said these can be a great alternative to the usual coffee date, which can often end up feeling like a business meeting or job interview.

“I think meeting this way provides a much more meaningful connection. We’re pairing up with local organizations and companies to give our members incentives and discounts to places like museums, lectures, and film festivals,” she said.

Siren recommends weekly events, and offers discounts to those events, to help daters get offline.

Even people who have already found someone on Siren stick around for the events because they’ve become a part of that community now and can easily find new date ideas. While these events are currently only being held in Seattle, Siren has plans to expand to other cities soon.

A Diverse User Base Reflects a Diverse Team

Besides Susie and Katrina (a.k.a. Mama Hess for her protective nature), the Siren team is made up of CTO David Golightly as well as expert advisers including Lisa Stone (Co-Founder of BlogHer) and Gayle Karen Young (CTCO at Wikimedia).

While they all handle important aspects of the company (from marketing to customer service to graphic design to development), they also put users first no matter the task at hand.

And with an app developed by two women of color — extremely rare in the tech industry — Susie and Katrina wanted to attract a user base that’s just as diverse as the company is.

Siren’s user base isn’t like your typical dating app audience — which tends to predominantly be heterosexual men, younger singles, and people looking for hookups. The gender ratio on Siren leans slightly more female (55% to 45%), and a majority of members are over 30 and looking for a meaningful date or relationship.

The Siren team’s main goal is to always do what’s best for members.

“We’re gearing older, and I think it’s been really great for us,” Susie said.

What Siren also does really well is include all types of people, especially those in the LGBTQ community. A new component of Siren that was especially important to the team is a “non-binary” gender option for people when they fill out their profile.

Susie and her team understand that gender and sexuality aren’t set in stone for some people, and while terms like “heterosexual,” “homosexual,” “gay,” “lesbian,” and “bisexual” can be helpful, they can also be restrictive.

“We want to help you find the person you’re looking for, but you don’t have to declare or put yourself in a box,” Susie said. “That gender fluidity is important for us to embrace.”

Whether we’re talking about their innovation, inclusion, or realness, Siren is taking the dating app space to the next level from every angle.

And while they’ll add more helpful features and grow the reach of their events in the near future, the long-term focus will continue to be building trustworthy relationships with their members and standing up to those who attempt to ruin the experience for everyone.

“If you want to be an asshole, there are plenty of places to do it, but don’t do it here,” Susie said. “As we scale, we want to maintain this idea that reputation and trust matter, and it’s our committed goal to work for our community every day. We are here trying to give people a fighting chance to alleviate loneliness and find a real physical connection.”