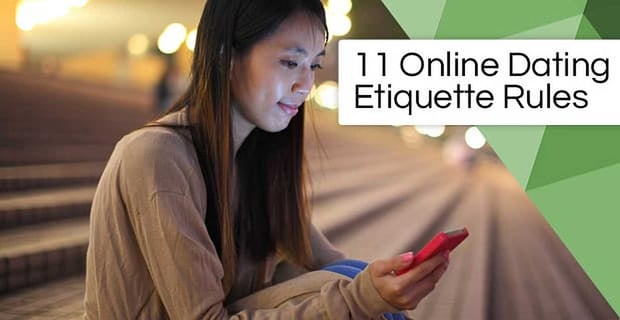 Remember that scene in “The Princess Diaries” when Mia’s grandmother, Clarisse Renaldi, the queen of Genovia, gives her etiquette lessons? These included things like not slouching at the dinner table, walking with your head high and your shoulders back, crossing your legs at the ankles instead of the knees, and not waving frantically with your hand.

Mia struggled at first, but she finally got her groove and proved to everyone that she has what it takes to follow in her family’s footsteps. Royals aren’t the only ones who should have good manners, though. We believe people, in general, should as well, especially online daters.

Without being face to face with someone, it’s easy to throw etiquette out the window when you’re online dating, but here are 11 tips for emailing, texting, and calling an online match that are super easy to follow.

In addition to a virtual wink here and there, messaging will be the first form of communication you’ll have with a match. This is also probably the most important part of the communication process because this is when he or she will decide if they’re interested in you, so you want to make a good impression. Below are three tips for how to do that.

1. If You’re Sending the First Message, Be Specific & Brief

You might have a lot of things you want to say to your match, but in this case, less is more. If you send them several paragraphs telling your life story and complimenting them, more than likely, they aren’t going to read it all. You want to pick two or three things and then end with a call to action.

Also, it’s vital that you mention details you could only find on their profile. “Hi, my name is Doug. You look really nice in your picture! How are you doing today?” isn’t going to cut it. Try being specific with something like “Hi, my name is Doug. I love that photo of you with your Beagle! I had one growing up, and he was the best dog I’ve ever had. Is yours crazy stubborn like most are? Mine definitely was. I swear there were times when he’d give me the side eye and do the exact opposite of what I told him to do :).”

If you haven’t heard anything in two or three days, don’t feel bad about sending another message. Maybe they haven’t logged on in a while or just overlooked your message. Sending one (and just one!) follow-up is a great way to make sure you show up at the top of their inbox as well.

This message should be shorter than the first one but still end with a question or statement that will make them want to reply: “Hey, Madison — just checking in to see if you got my last message. Would you be interested in grabbing coffee sometime? I’d love to swap some Beagle stories with you!”

3. Don’t Wait Too Long to Reply to Someone Else’s Message

We’ve probably all experienced the frustration of texting or IMing back and forth with someone and then all of a sudden they stop being so responsive. Or maybe you can see the dreaded three dots, signaling that they’re texting or typing on the other end, but the text or chat doesn’t come in until several hours later. You don’t want to be the cause of someone’s frustration in online dating, so try to be as prompt as you can with your replies.

For example, if someone messages you in the early evening, and you’re interested in them, make an effort to respond before you go to bed. This doesn’t mean you have to be at their beck and call, but we aren’t busy 24 hours a day, even if it feels like it. You have a moment in there to send a quick message.

4. Use Proper Grammar & Watch Out for Spelling Mistakes

We can’t stress enough how much poor grammar and spelling mistakes are an online dating no-no. And the stats that prove it are shocking — including 48% of singles polled consider this a dealbreaker and poorly written messages are four times more likely to be flagged as fraud.

You don’t have to be a journalist to have mistake-free messages either. You could always have a friend look them over or run them through a tool like the Hemingway app.

It’s even more tempting to take shortcuts and loosen up on your manners when you’re texting than when you’re emailing, but resist the urge as much as possible. Texting is a sign that you’ve taken communication with your match to the next level, and you don’t want to blow it.

Similar to messaging, you don’t want to send a text that’s as long as a Tolstoy novel. If they have to scroll, it’s too long. You’re giving them a lot of information to take in (which means it may take them a while to respond), and it could kill the mood and prevent any kind of cute banter from getting started.

On the flip side, you don’t want to send a series of one- or two-word texts all within a short amount of time. Can. You. Imagine. How. Annoying. That. Would. Be?

You know what kind of pics we’re talking about. You would think that this doesn’t need to be said, but it does.

Unless someone asks you for a photo of your Cyprian scepter or aphrodisiacal tennis court, as they called it in the 1600s, don’t send unsolicited sexts. It’s unbelievably rude, and you’re just opening yourself up to having the person talk about your junk with their friends.

7. Be Sparing With the Emojis

I love emojis as much as the next person, but they tend to lose their charm the more you use them. You also don’t want him or her to misinterpret what you’re trying to say. Stick to the straightforward ones for now, like the smiley face, until you get to know each other’s humor.

Earlier, we talked about how annoying it can be when you’re waiting forever for someone to respond to your message, but that feeling is significantly amplified when it’s texting. There isn’t a strict timeline here, but a Business Insider article says no longer than one to three hours. Remember you can’t control what they do, but you can control what you do. And setting the example is what you should be doing.

Talking on the phone almost feels like a foreign activity — people tend to assume the worse when someone calls them (“Oh my God, what happened to Grandma?!”) However, in dating, it’s a good way to take the communication a step further. Not only do you get to hear their tone, but it’s also easier to go back and forth with little quips and jokes.

Before you call an online match, you should ask them if it’s OK to do so. Like I said, some people get weirded out when someone calls them. Then ask them what’s the best time to talk. You’ll want to know if he or she is a night owl or if they have an early morning meeting or whatever the case may be. This is when you can give them your preferred times as well.

10. You Shouldn’t Be in the Middle of Doing Something

The TV blaring, the dog barking, the dishwasher running, the people ordering drinks at the bar — these are all things that can ruin a phone call, especially with someone you like. You want to focus 100% on what they’re saying, and you want them to do the same.

Plus, repeating yourself or asking someone else to will prevent things from flowing. If you’re busy, ask if you can call them back, or set up a call when you know you’ll be in a quiet space and can really dedicate yourself to the conversation.

The longer you wait to meet in person, the longer you’re putting off seeing if the chemistry is there. It would feel horrible if you started to like this person over text and email — only to find out you don’t have the same feelings in the real world. Usually, setting up the date within a week or two of the first online meeting is the way to go.

Online dating may not be as serious as running a country, but it’s still important to practice good manners. The rules above aren’t necessarily rules, per se, and they’re not supposed to take the fun out of online dating. But they are something good to keep in mind when you’re trying to put your best foot forward.

5 Signs You’re Coming on Too Strong in Your Emails