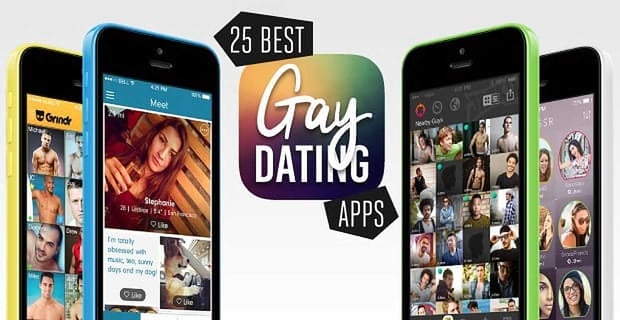 Surveys of single people indicate that about 70% of gay men and 47% of lesbians have dated someone they met online, and dating apps are easily the most popular way for same-sex couples to get together.

If you’re wondering which app to download to find LGBTQ+ love, look no further because we’ve picked the 25 best dating apps for gay, lesbian, bisexual, and transgender singles. Click the links below to read the section that best meets your needs!

Let’s start with the best of the best. The 5 apps below are some of the most popular dating apps for straight, bisexual, and gay singles.

Match sees more than 13.5 million visits a month and has more than 1.7 million paid members, but the best part is the most popular dating site ever welcomes straight and gay singles alike.

Match has been around since 1995, and it has kept up with the trends in the dating scene by consistently putting its members first.

Free members can chat with Top Picks on the Match site or app, and they can use search filters to identify their perfect match in the database.

If you’re a tech-savvy gay or lesbian dater, you’ll love Zoosk, the socially savvy dating site and app. Since 2007, Zoosk has built a massive membership base of over 40 million singles.

Thanks to social network integration, the Zoosk app makes it easy to meet new people when you’re sitting at home, commuting to work, on the treadmill, or anywhere else.

Zoosk uses behavioral matchmaking to make smart match suggestions that are similar to those users have liked or messaged in the past. That means the more you swipe, the more precise your potential match list will become.

Not only does Elite Singles have an intuitive app that’s great for gay singles who are on the go a lot, but it also has a high-quality user base — thanks to its focus on education.

Over 85% of EliteSingles members have completed college (and some have gone on to get their masters, doctorates, or other post-grad degrees), and over 90% say they’re interested in getting in a genuine relationship.

OurTime is the largest subscription dating site for singles over 50, not to mention it’s also the #1 dating app in that demographic.

If you’re a mature gay single looking for another mature gay single, OurTime is an excellent choice. OurTime currently allows same-sex matching, and users can change their dating gender preference by going into their settings.

BlackPeopleMeet is the go-to app if you’re looking for the largest online community of black and interracial singles, including gay men and lesbian women.

BlackPeopleMeet has straightforward search and matching tools that lead singles to their perfect date with no muss and no fuss.

In terms of hookup sites, AdultFriendFinder has so many things going for it, especially for gay singles and couples. For one thing, it supports the world’s largest sex and swinger community.

From the history (founded in 1996) to the features (e.g., videos), you’re sure to be impressed by the AFF community. This sex-positive hookup site allows singles, couples, and polyamorous people to come together to fulfill their secret desires.

Seeking hot dudes in your area? Jump online. The 11 apps below are great for gay, bisexual, and bi-curious men.

MenNation is the self-proclaimed world’s largest gay dating and hookup app, and that appears to be true. More than 79 million gay and bisexual men have created a profile, and at least 83,000 are online in your area at the same time, at any given time.

It’s totally free to add your information and photos to MenNation as well as browse through singles (and couples), receive match suggestions, and interact (e.g., via virtual winks).

“The safest way to meet your man,” Taimi is new to the gay dating app scene, but it’s already making an impression. Taimi’s main focus is security, so every profile is verified and protected by a two-factor authentication and moderated by the team 24/7. Probably the funnest feature on Taimi is the built-in video calls, so you can take your conversations to the next level.

Available in more than 192 countries, Grindr is the most popular location-based dating app for gay, bisexual, and bi-curious men. You’ve almost certainly heard of Grindr, and maybe you think it’s just a hookup app, but actually a lot of gay men have gotten into relationships here too.

Want more “beard love” in your life? Then you should turn to Bristlr. Open to everyone, this fun (and super specific) dating app is made for singles with beards and singles looking for someone with a beard.

From bears to jocks to just normal guys, SCRUFF can help you find a match right around the corner or from across the world.

GuySpy has some of the coolest features of any dating app, from personal voice greetings and favorite lists, to search filtering options and a travel mode.

Known as the first and only gay chat and gay dating app exclusively for men over the age of 30, MR X takes your wants and needs into consideration in order to send you quality matches.

GROWLr, the Bear Social Network, is a free app that lets you view photos and chat with its more than 5 million members and keeps you up to date on the latest bear run and bear bar listings.

More than 6 million people and counting have signed up for Hornet, a free and easy to use app for gay, bi, and curious men, so we think your chances of meeting someone special are very high.

One of the fastest-growing apps for men who want to date other men, Jack’d lets you browse thousands of photos, see who’s viewed your profile, anonymously select your own matches, and more.

The sky’s the limit on BoyAhoy, where you’re only a few clicks away from finding like-minded gay men anywhere, anytime.

The 5 apps below are best for lesbian, bisexual, and bi-curious women.

Launching in 1996, the LesbianPersonals company is among the longest running in the online lesbian community. The app came along a few years after and has made an impact ever since.

Gay and bisexual women interested in hooking up are best suited for LesbianPersonals, and even if you’re already part of a couple, you can still join the app and search for a third to add to the party.

What once was Dattch has now become HER, the app for women who like women. Not only is HER like a sassy best friend who really knows how to set you up, but you’re given more than just the typical features, including daily lesbian news and events. Over 4 million lesbian, bisexual, and queer women have joined HER so far.

Facebook Dating is an extension of Facebook, and it’s rapidly becoming a popular meeting space for singles of all orientations and backgrounds. Facebook Dating allows singles to meet new people by swiping or to connect with crushes in their friends list by mutual matching. No one on our Facebook feed will see your activity on Facebook Dating, so it’s a private place for lesbian matches.

Tired of the bar scene? Bored with swiping apps? Maybe it’s time to join an old-school hookup site like BeNaughty. The BeNaughty dating site allows single women to communicate for free, and its search tools allow for a lot of fun exploration and discovery of similar interests. If you’re a lesbian woman or bisexual woman, you’ll have your pick of matches on this naughty app.

Whether you’re staying local or traveling to a distant place, you won’t want to do it without Atraf Girls. Flirting with and meeting other lesbian women has never been so simple.

While the apps above can also work well for bisexual and transgender daters, the 4 apps below have gotten some of the best reviews from this target audience.

With more than 2 billion swipes per day, your odds of connecting with someone on Tinder are very good. Whether you want a hookup, casual date, or relationship, Tinder can make it happen and lead you to your dream date.

Launched in 2004, OkCupid is a free dating app that’s awesome for younger LGBTQ+ daters, especially those who like the idea of being matched by their on-site behaviors and answers to multiple choice questions. OkCupid is free to download, and it offers free matching and messaging, but the thing we really like is that it has 13 orientation options and 22 gender options on its profiles.

Distinc.tt is an unbeatable social networking platform for the LGBT community that focuses not on hookups but on friendship, companionship, common interests, and the like.

The Best Gay Dating Apps Work For You

It’s amazing to see the LGBTQ+ community expanding and welcoming so many different types of people — and bringing so much love into the world. Online dating has been a key ally in that journey, helping singles make connections, find solidarity, and pick up dates without having to come out of the closet if they don’t want to.

Today’s gay singles have so many options when it comes to online dating apps, and we only expect this number to keep on growing as time goes by. Any of the apps on this list can meet the needs of the gay community and build them up whenever they’re feeling alone.